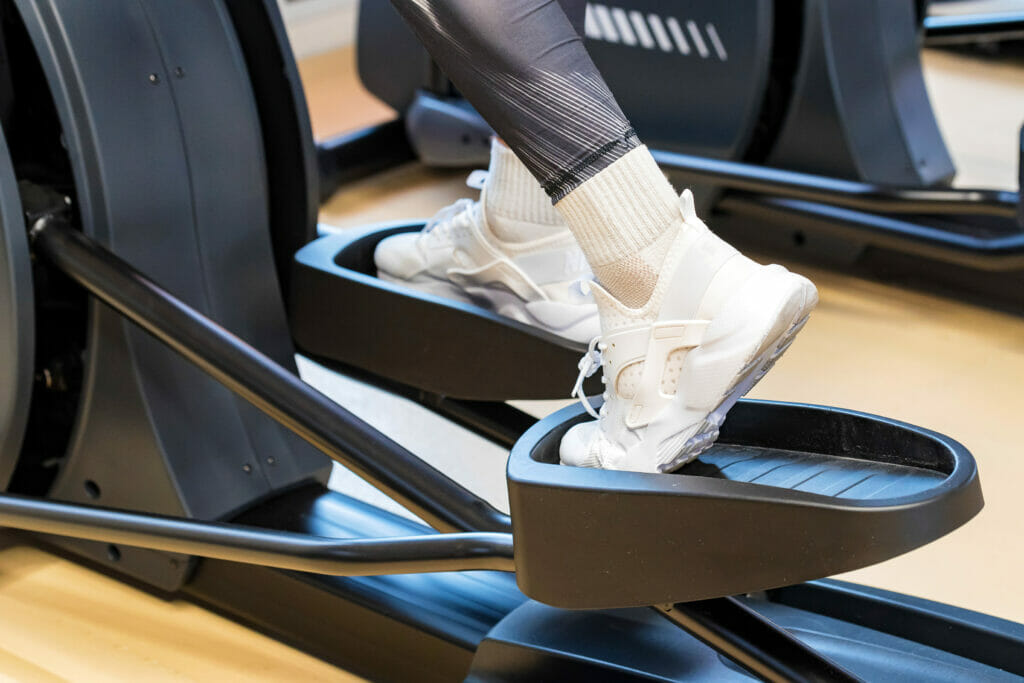 If you’re looking for a quality, mid-range home elliptical, Sole’s E35 and E55 are both top choices.

Both models come with pretty heavy flywheels, comfortable stride lengths, and great warranties. And when it comes to power incline and console features, there aren’t many differences between the 2 models either.

With so many similarities, it can be difficult to choose the better option, but I think I can help.

In this article, I’ll go over the subtle differences between the E35 and the E55. I’ll also provide my 2 cents regarding which model I think is best for whom and whatnot.

After reading, you should have a much better idea which elliptical is right for your home gym

Alrighty, let’s get to it. 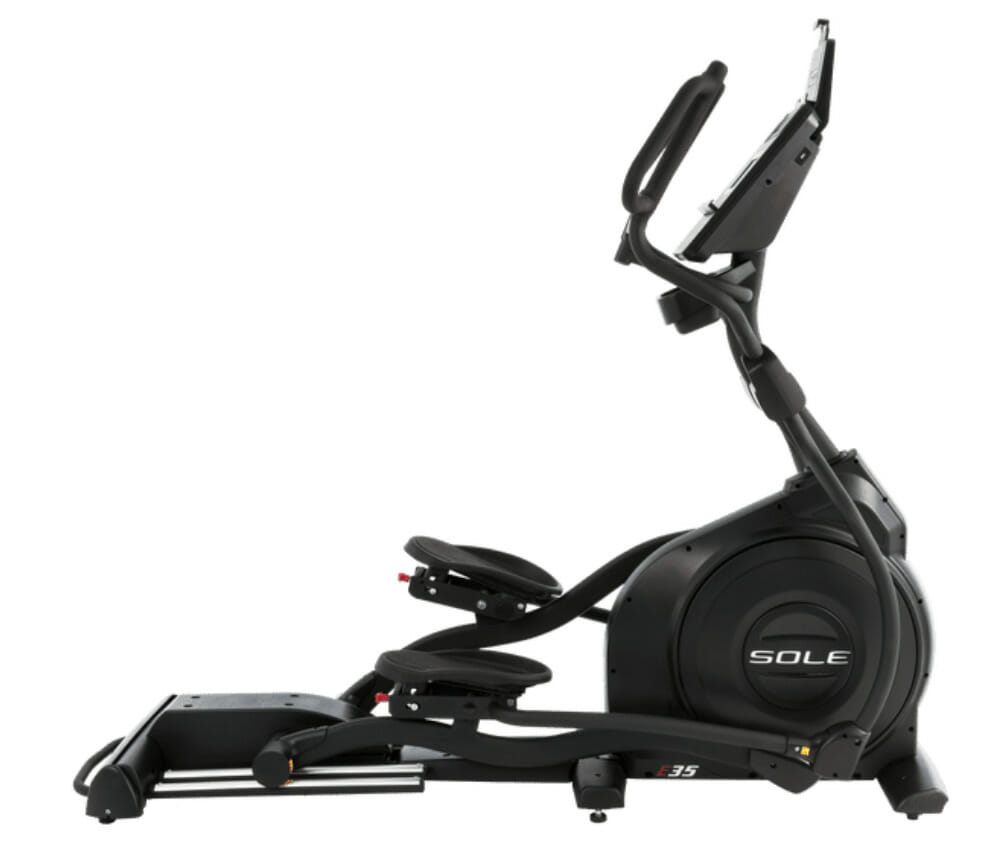 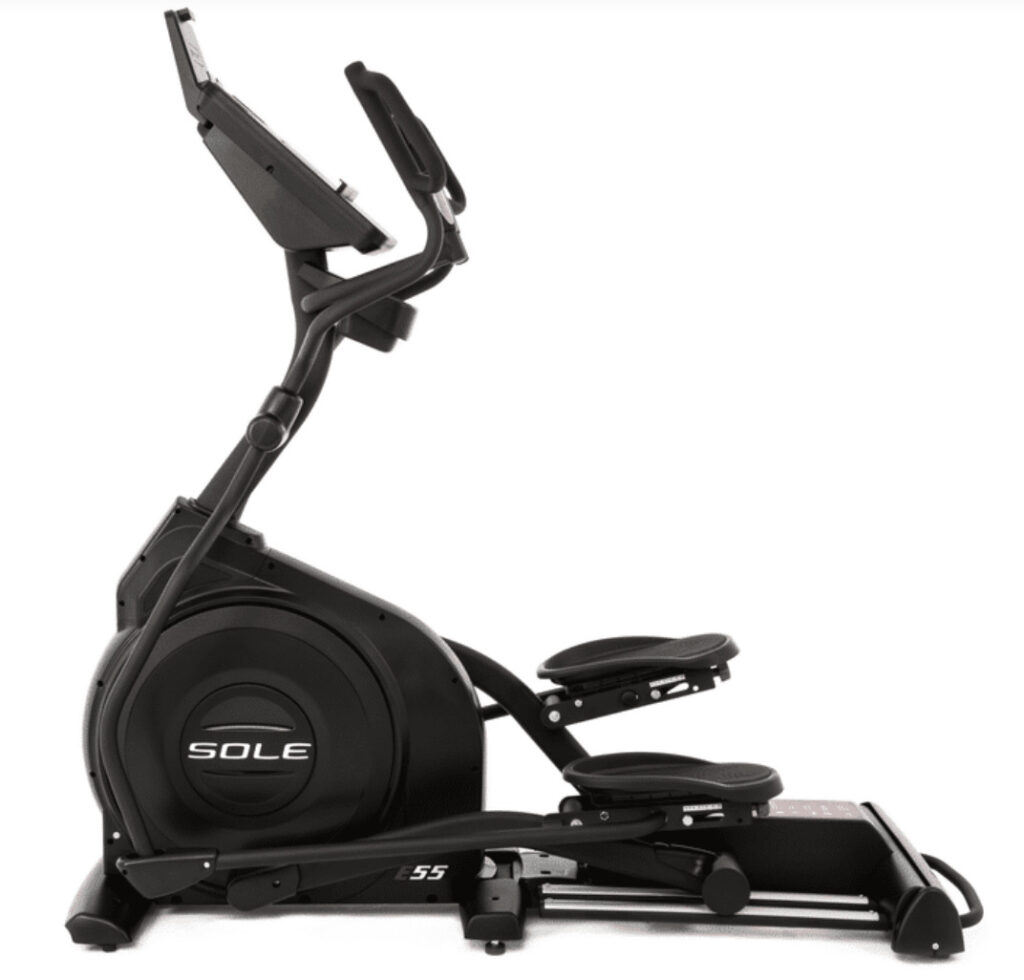 Above images courtesy of Sole Fitness

As a brand, Sole is one of the best out there when it comes to home cardio machines. They’re my personal favorite because I like that they design their equipment with performance in mind over anything else.

It’s true their consoles are fairly simple, so if you’re looking for workout streaming or HD displays, you’ll be better off with other brands.

But if you value heavy-duty components, strong motors, and long warranties, Sole is a safe bet.

When it comes to ellipticals, Sole has 6 to choose from.

You’ll notice that all of their elliptical model numbers conveniently start with an “E” to let you know it’s an elliptical and the higher the number, the more advanced (and expensive) the machine.

The E25 is their entry level elliptical and the E98 is their most advanced option (it’s rated for light commercial use even).

The E35 and E55 are in the middle of the pack, in terms of both specs and cost.

Speaking of specs, let’s start off by comparing some of the most important performance specs these 2 ellipticals come with. Afterwards, we’ll move on to the consoles and additional features.

(P.S.- if you’re interested in learning about the other Sole ellipticals, check my complete Sole Elliptical Guide for a comparison of all the models)

An elliptical’s stride length refers to how far apart the pedals move during use.

It’s an important spec to know and consider because if you get an elliptical with a stride length that doesn’t fit you, it’s going to effect the quality of your workouts.

Most people are comfortable with a 20″ stride length, so this has become the gold standard for home ellipticals.

The E35 and the E55 both come with the same 20″ stride, so there’s no difference whatsoever in terms of this spec. This means most folks should be able to use either elliptical fairly comfortably.

(Although if you’re on the shorter side and worried about what stride length is right for you, check out my guide on the topic).

Ok, I cruised through stride lengths because there aren’t any differences between these 2 ellipticals with regards to that spec.

We do see a difference between these models when it comes to the flywheels though.

You may’ve heard about flywheels when talking about spin bikes. Well, home ellipticals use them too and they basically work the same way the do on exercise bikes.

As you pedal, the flywheel spins. With a magnetic resistance system, there are magnets around that spinning flywheel (which is metal by the way).

The resistance is adjusted by changing how close or far away those magnets are from the flywheel.

And having a heavier flywheel is usually preferred because it makes for a smoother feel (more weight = more momentum).

It’s rare to see a higher numbered model come with a lighter flywheel, but keep in mind these 2 ellipticals are priced identically.

The E35 comes with a flywheel that’s 5 lb heavier, which should technically make for a more fluid feel than the E55. That said, I consider any flywheel 20 lb or heavier to be considered “heavy” enough to provide a smooth workout.

Overall though, the E35 comes with a heavier flywheel than the E55.

The E35 is packing a little more muscle under the hood with a flywheel that’s 5 lb heavier, but the E55 has a trick under its sleeve when it comes to the frame…

Which brings us to the biggest advantage of the E55- its compact footprint.

If you compare the assembled dimensions, you’ll see that the E55 is significantly smaller than the E35 (in terms of how much floor space each requires):

This makes the E55 a great choice if you’re working with limited floor space- if every inch counts, having a frame that’s 11″ shorter could be all the difference in the world.

And even though the E55 is smaller, it still comes with the same impressive weight capacity as the E35, which is 375 lb.

This allows both ellipticals to safely hold most users, but it also gives us an idea to the quality of build of both models as well.

Looking at the assembled weights, the E35 is a little heavier (231 lb vs 214 lb), but this isn’t surprising considering the E35 is longer and comes with a heavier flywheel.

The takeaway here is that both ellipticals are heavy-duty, but the E55 comes with a significantly smaller footprint, which requires less floorspace to operate.

When it comes to performance, the E35 comes with a heavier flywheel, but both models have the same stride length. The E35 is a bit heavier, but the E55 is more compact.

Moving on, let’s check out the features each elliptical has to offer.

There aren’t many differences when it comes to this category, so I think it’ll be easier to specify them first, and then list all the features they have in common.

The biggest difference between these 2 ellipticals when it comes to features is a cosmetic one- the screen size.

Both are white back-lit and show all the same workout metrics.

The only other difference is found in the pedals: the E35 allows you to choose between 3 pedal positions, while the E55 comes with a fixed pedal position.

That’s it, otherwise these 2 ellipticals come with the same features. These include:

I mentioned briefly in the intro that Sole is known for their generous warranties. Well, time to be a little more specific.

This will be easy because Sole backs the E35 and the E55 with the same warranty:

This is about as good as it gets in this price range (Spirit offers 10 years on a lot of their ellipticals, but they’re a little more expensive).

You can’t beat a lifetime guarantee on the frame and 5 years on parts is longer than the 2-3 years a lot of brands are offering.

And 2 years is better than the 1 year most others provide on labor.

Overall, a great warranty on both ellipticals.

I mentioned that both of these ellipticals come with the same asking price. To be more specific, expect to pay $1,499 for either (this is the sales price, but they’re always on sale).

This puts them in the mid-range price point, which is a great budget to be working in because you usually find your best deals in this range.

Personally, I think this is a fair price for either considering the specs and warranties they come with.

But when it comes to comparing the 2, price won’t play a part because there’s no difference here.

Alrighty guys, that about does it.

I feel like that was a really brief comparison, but there really aren’t that many differences between the Sole E35 and the E55.

When trying to choose between them, I think the compactness the E55 offers is the biggest deciding factor- if you’re working with limited floor space, the E55 makes more sense.

If floor space isn’t an issue, I would go with the E35 because of the heavier flywheel.

The E55 comes with a slightly larger screen, but I don’t think that’s enough reason alone to go with the E55.

Overall, the differences between these 2 elite ellipticals are subtle, but it really all comes down to how much floor space you have at your disposal.