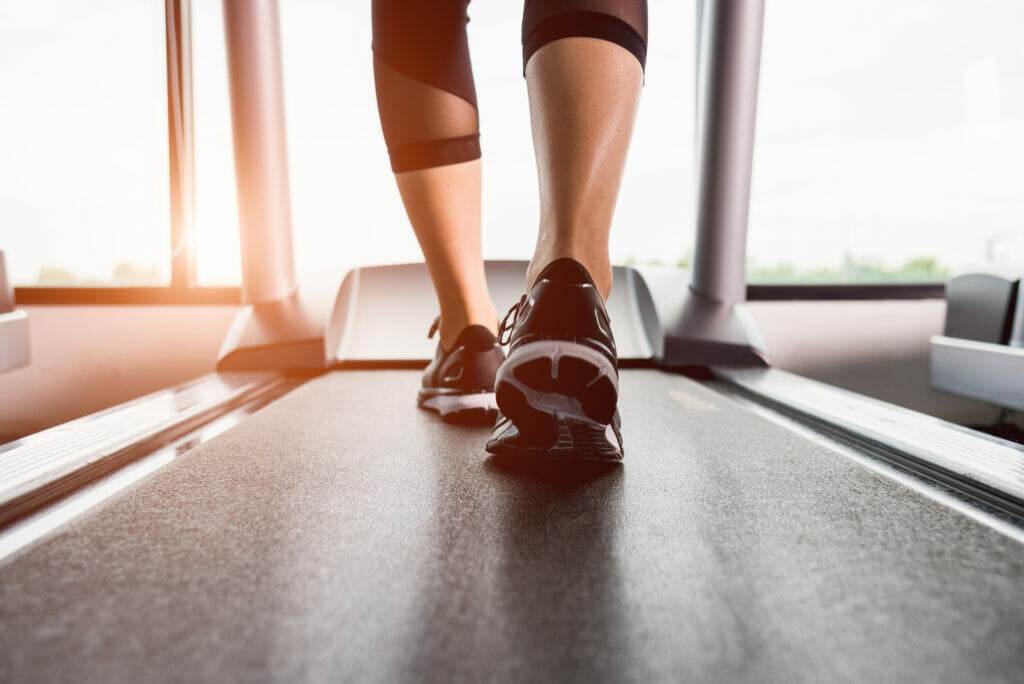 The Carbon T14 comes with one of the biggest touchscreen consoles ProForm offers (14″ as the model name might imply), which sounds great if you’re looking to join the world of home fitness streaming.

But into order to get that larger screen, you have to be willing to give up something in the performance department.

Which in this case, means a smaller running surface and a weaker motor than what the other top treadmills in this price range are packing.

This may not be a big deal for smaller users and folks who don’t plan to spend a lot of time at top speeds, but for the rest, it could be an issue.

Overall, I don’t have anything against the Carbon T14, I just think there are smarter buys for this price range… but I’m getting a little ahead of myself.

In this review, I’ll be going over everything this treadmill has going for it, as well as the areas where it falls a bit short.

I’ll also compare it to some of the other top treadmills in this price range so you can see how it stacks up.

After reading, you’ll know whether or not the Carbon T14 makes sense for your home gym.

Well, let’s get to it already. 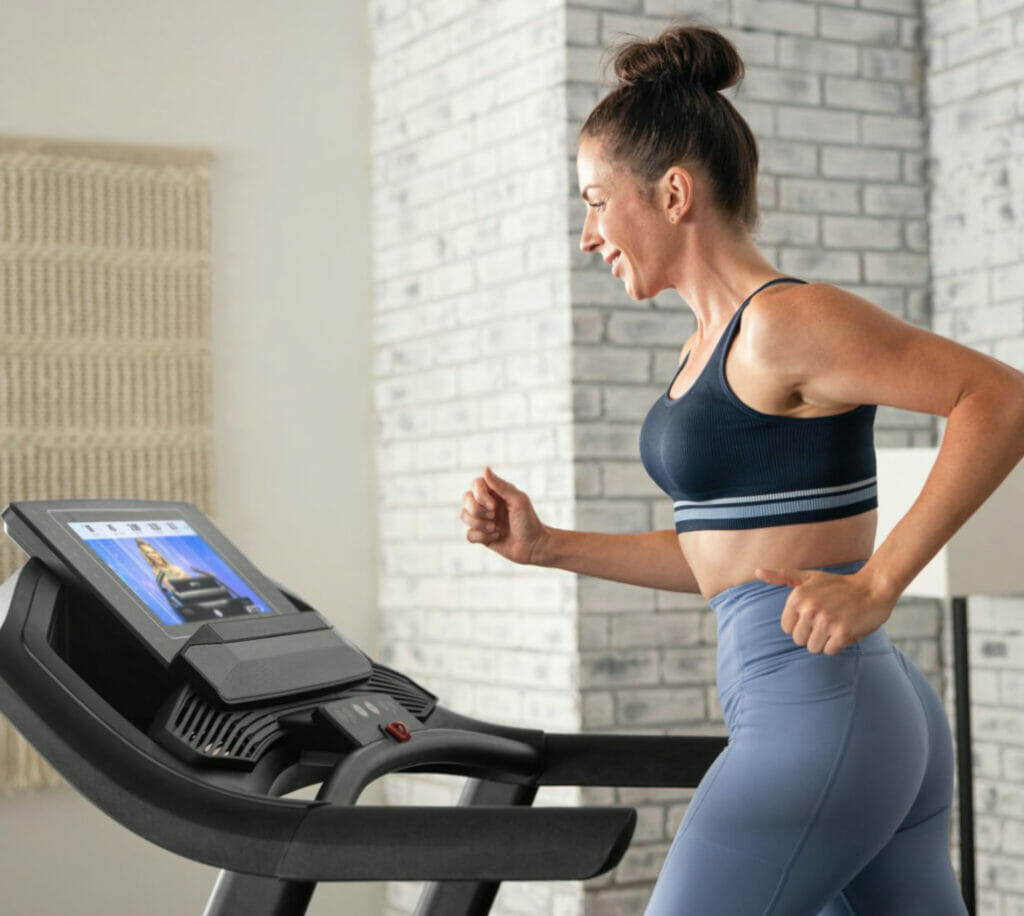 Generally speaking, I like ProForm as a brand and when it comes to moderately priced treadmills, I think they’re one of the better brands out there.

FYI, ProForm is owned by the same company that owns NordicTrack, which is why both brands offer streaming through the iFit platform.

I like to think of ProForm as NordicTrack’s little brother – the brands are very similar, but NordicTrack machines tend to be a little heavier-duty and higher-end.

But, to be fair, they usually cost a little more too.

Anyway, ProForm has several treadmills to choose from and they’re conveniently organized into 3 different series- Pro, Carbon, and City.

The Pro Series contains their highest-end treadmills (like the Pro 9000), the City Series has their lowest-end models (the L6) and the Carbon Series is stuck right in the middle.

The Carbon 14 we’re here to go over now is the highest-end treadmill in that Carbon Series and at the time of writing this, goes for roughly $1600.

A treadmill’s running surface is an important spec to consider because it tells you how much room you’ll have to work with when on the machine.

It’s basically the equivalent of stride length for ellipticals, which is equally as important.

And that’s because if a treadmill’s running surface is too small, you’re probably gonna feel cramped or worse yet, find yourself having to shorten your stride when running at faster speeds.

This spec is measured in inches (here in the States anyway) and usually written as “width x length”.

Fair enough, but what counts as “smaller” or “larger”?

Well, most treadmills that cost north of $1k usually come with a running surface that’s somewhere in the 20″ x 60″ range.

This has kinda become the gold standard because at this size, folks of most heights can stretch out as much as they like without literally running out of space.

And many now even come with wider, 22″ widths for even more space.

This isn’t tiny, but it’s still a good deal smaller than what I’d expect to see from a treadmill in this price range.

For the sake of comparison, Sole’s F80 and Horizon’s 7.4 AT, which are both priced almost identically, both come with 22″ x 60″ running surfaces.

Anyway, with this shorter deck, taller users might have to be careful to ensure they don’t stretch beyond the belt when running at faster speeds.

But shorter users and folks working with slower speeds will likely be fine – but still, more room is always a good thing.

When it comes to the frame itself, the Carbon T14 comes with an assembled weight of about 200 lb, which is a quite a bit lighter than the treadmills just mentioned (which are both more in the 300 lb range).

I like to compare assembled weights because it can gives us an idea as to how stable we can expect the machines to feel, with heavier being a good thing because the extra weight will help the treadmill feel more secure (and wiggle less during use).

The Carbon T14 isn’t the heaviest-duty treadmill in this price range, but it’s not awful either.

It also comes with a weight capacity of 300 lb, which is pretty average for any home treadmill, but again, the heavier-duty treadmills mentioned earlier come with weight limits in the 350 lb+ range.

The T14 is a folding treadmill, so you can easily fold it vertically for storage after workouts.

Overall, the Carbon T14 is a smaller, lighter-duty treadmill than many of the other treadmills in this price range.

This treadmill’s running surface/frame doesn’t blow me away and neither does the motor.

At 2.75 CHP, the Carbon T14 is a good deal weaker than most of the other higher-end treadmills in this price range where 3.5 CHP motors aren’t uncommon.

To be fair, motor strength isn’t everything, especially if you plan on spending more time walking and jogging at slower speeds, but I’m of the opinion that more power is always a good thing.

And that’s because stronger motors tend to operate more smoothly than weaker ones – mostly because they don’t have to work as hard to provide the same output.

This usually makes them a little quieter too.

Plus, most pros recommend going with at least a 3.0 HP motor if you plan on regular running – based on this, the Carbon T14 isn’t the best option for more serious runners.

And this treadmill can also only reach a top speed of 10 mph.

This is a lot faster than I ever get my treadmill going, but it’s still slower than the 12 mph top speed most comps are able to reach.

The T14 can also reach a top incline of 12% for added workout variety but, guess what, that’s lower than the 15% incline most other models in this price range can reach.

And when it comes to the rollers (the part that the belt physically glides upon), ProForm doesn’t disclose their size, but I’d bet dollars to donuts that they’re 1.9″, which again, is small for this price range.

Are we seeing a pattern here yet?

When it comes to performance, the Carbon T14 is smaller and weaker than the other top treadmills in its price range – but I’m guessing most folks are checking this treadmill out more so for its features than its performance specs.

The ProForm Carbon T14 Treadmill comes with the following features:

14″ HD touchscreen console- the most impressive feature on this treadmill is the large, HD console that makes seeing all workouts and stats a breeze. This is one of the largest screens ProForm offers, with only their Pro 9000 coming with a larger one (22″).

iFit- this is ProForm’s fitness streaming platform and this is what you’ll use to access all your instructor-led workouts. ProForm includes a 30 day trial of iFit with purchase, than it’ll cost ya around $39/month from then on to keep using. Technically, you don’t need an iFit membership to use this treadmill, but for the life of me, I can’t see why anyone would invest in this treadmill unless they planned on using iFit.

Interactive training- with iFit, you can also take advantage of the interactive training feature that allows the speed and incline settings to be controlled automatically by the instructors. This means all you have to do is show up and keep up (but you can still make manual adjustments too if you like).

Bluetooth- the console is compatible with bluetooth headphones if you don’t want to use the built-in speakers.

Heart rate monitoring- it’s also compatible with strap heart rate monitors, although one isn’t included with purchase (I’m not sure why treadmills don’t come with these anymore?)

Quick-touch buttons- these convenient buttons allow you to instantly set your speed and/or incline without having to keep pushing the up/down buttons. They come in especially handy when doing your own interval workouts.

Water bottle holder- and yes, don’t worry, there’s a place to store your beverage of choice.

Most home treadmills are pretty easy to assemble and the Carbon T14 isn’t really any different.

Like most, you’ll have to snake the cables up through the right upright and this tends to be one of the more tedious parts of assembly.

Otherwise, it’s all about attaching the uprights, attaching the console, connecting the handles and cross bar, and connection a few covers.

With the T14, you have to manually connect the hydraulic piston that helps control the deck when raising and lowering it – not a huge deal, but some treadmills come with this part already completed.

Overall, if you purchase this treadmill, you shouldn’t have to worry too much about assembly, it’s a pretty straightforward process.

This is a pretty short guarantee for a treadmill in this price range.

But a year on parts is pretty darn weak.

Most legit treadmills in this price range offer at least 2 years on parts and Sole/Horizon offer 5 years.

A year on labor is fine, that’s what most offer.

Overall, this warranty could be a lot better.

As you can probably tell, this isn’t my favorite treadmill.

When it comes to the running surface, the motor, the frame, and even the warranty, I think the T14 falls short.

But it does come with a nice large, HD touchscreen console and I understand this is why most people are probably interested in this treadmill in the first place.

So, I could see being willing to give up a little in the performance side to get your hands on that nice console, but luckily, you don’t have to.

There are other streaming treadmills out there in this price range that come with much better specs.

Like ProForm’s own Pro 2000, which at the time of writing this, is priced identically.

So, in other words, the Carbon T14 isn’t an awful choice, but I don’t think it’s a good deal either, considering these other better options are out there.