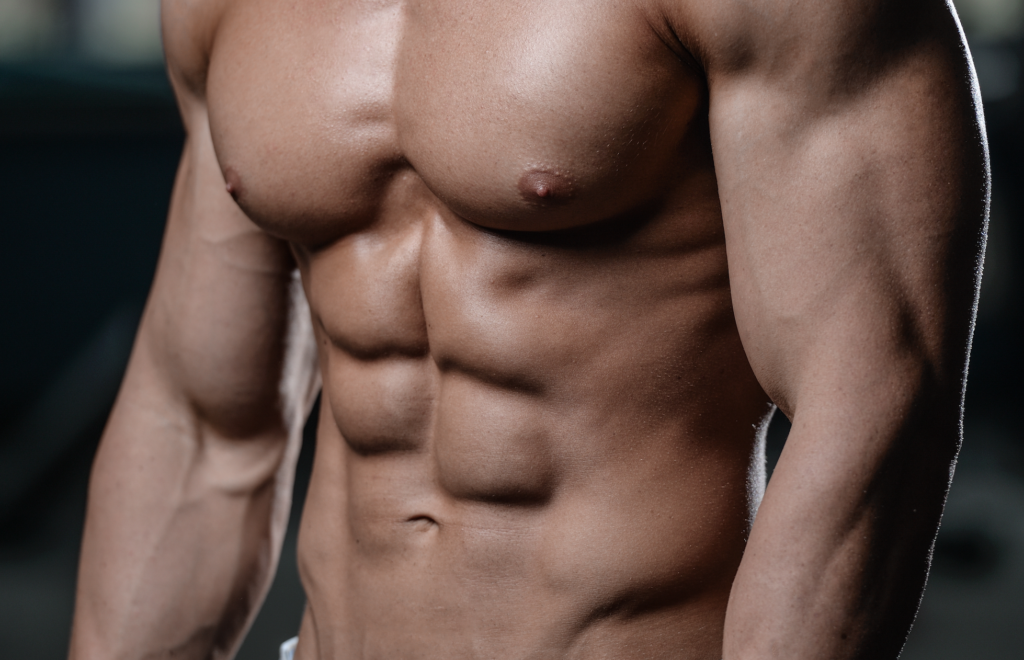 At its core, the X3 Complete Home Gym System (aka, the X3 Bar) is a resistance band set with a couple of extra included accessories.

But based on the X3’s claims, you might think it was some new fitness technology posed to take the market by storm.

That said, if you’re looking for a legit resistance band set that can offer some crazy amount of resistances, the X3 could still be worth investing in.

In this review, I’ll go over everything the X3 has to offer – I’ll also offer my 2 cents on some of the claims this product has been making.

After reading, I think you’ll have a better idea as to whether or not this gym system is worth investing in.

Because after all, when it comes to home fitness products, there are a ton of fish in the sea, if you know what I mean.

What Is The X3 Complete Home Gym System? 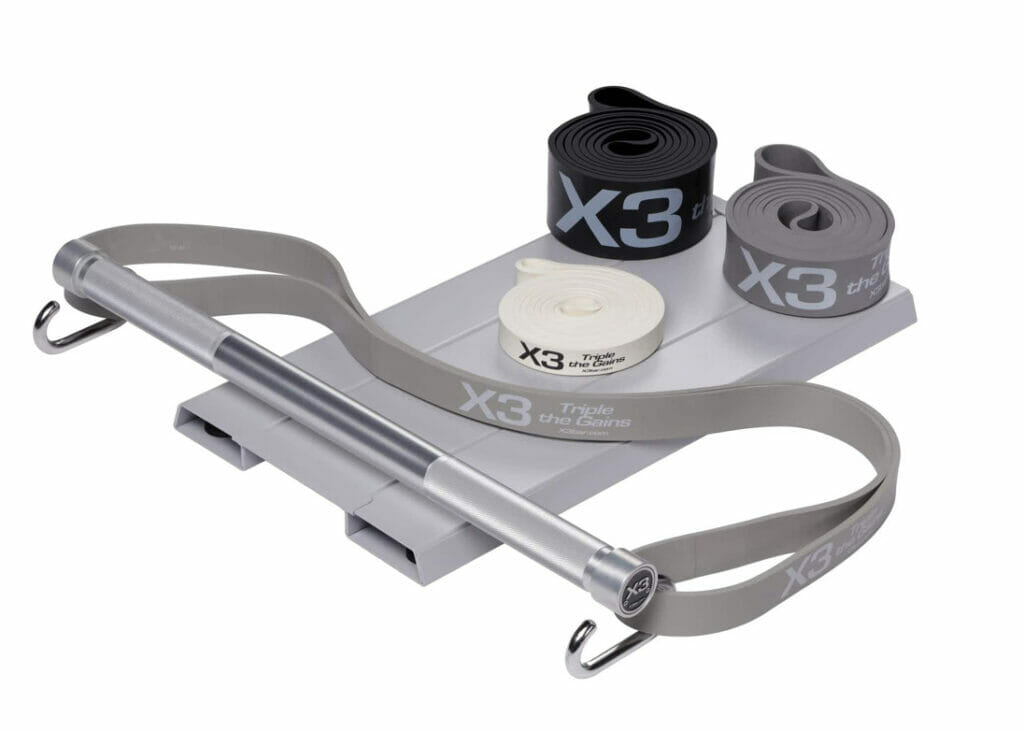 Also known as the X3 Pro Bar, this product is designed to be a portable home gym system. It consists of a steel bar, 4 resistance bands, and a foot plate.

At first glance, this doesn’t sound particularly interesting or different from any of the other portable resistance band-based home gyms.

One thing that definitely sets the X3 apart is the price, but we’ll get back to that later.

Before we get too far, I want to discuss it’s creator, Dr. John Jaquish.

Dr. Jaquish has a PhD in biomedical engineering and first came on the scene when he developed a device to help reverse osteoporosis by improving bone density- with helping his mother being his prime motivation.

He’s still apparently pretty involved with the field, traveling and speaking to groups regarding bone health and ways fitness machines can be used to treat osteoporosis.

His company, Jaquish Biomedical, continues to produce these devices, but seems to have focused more on their home gym products recently.

Lots of fitness products use a similar system- any system using a resistance bands really (Bowflex and their power rods do too).

You will also find variable resistance training applied in commercial gyms when you see someone bench pressing or squatting with a barbell and resistance bands (or chains) attached to the barbell.

The X3 is a pretty simple system- as mentioned above, it’s a bar and 4 bands. The devil is in the details though:

The included bar is made out of steel and chrome plated.

It’s designed to hold over 500 lb worth of force, which will make more sense when we discuss the resistance bands.

It has a hook on each end to attach the bands to and there are ball bearings inside each end (where the hook is) that allows the bar to rotate while keeping the band’s orientation consistent- this makes sure the bands don’t twist or get kinked during use.

Users agree the bar is impressive and well designed to hold a lot of weight. T

hey liken it to the feel of holding a barbell, which is a definite step-up from some of the plastic and more flimsy bars on the market.

And just the fact that it comes with a bar in the first place is nice because a lot of resistance band sets don’t.

The 4 resistance bands that come with the X3 are heavy duty and designed to provide more resistance than most of the bands you’ve probably come across.

They are custom made from a double layer of extra-thick latex specifically for the X3.

The 4 included bands come in the following resistances (recalling that with bands the resistance isn’t constant, that’s why each has a range):

You can also “double over” a band to double the resistance (the light-weight band then becomes up to 160 lbs) and combine bands to fine tune the resistance felt depending on the exercise.

There’s also an “elite” band that can be purchased separately- it provides 200-300 lb of resistance and even up to 500 lb when doubled over.

What really jumps out to me is how much resistance these bands are capable of providing.

The bands developed for the X3 provide a lot more resistance than the resistance tubes currently hanging on my attic door- I think my HEAVIEST tube offers 50-75 lb of resistance.

These X3 bands remind me more of the type of bands used to add a variable resistance training aspect to power lifting moves, or that are used for pull up assistance.

The footplate is a nice touch, because one thing that sucks about resistance bands is having to stand on them.

The current, steel alloy plate is an upgraded version of their older, polyethylene plate, but it still has a notched out area on the bottom designed to keep the band in place.

This plate is also designed to withstand over 600 lb of force, so it should be able to keep up with the extra strong resistance bands.

The X3 Home Gym System also comes with a 12-week online training program to help you make the most of your new product.

Each week consists of 2 different workouts, each performed 2x (one workout on Monday and Thursday, the other on Tuesday and Friday for a total of 4 workouts per week).

This is probably a different way of exercising for most of you, but keep in mind you can make up your own workouts too.

You don’t have to follow their online program if you don’t want to.

Personally, I find it hard to believe that moderate to experienced weight lifters are going to be happy with a single set of each exercise, whether it’s to failure or not.

But again, nobody is forcing you to follow the online workouts.

With some imagination, you can probably come with more exercises, but the ones used in the workouts consist primarily of stuff like: chest press, front squats, deadlifts, tricep extensions, bicep curls, shoulder press, and rows.

The tips vary from week to week and are supposed to be progressive. Dr. Jaquish spends a lot of time talking about ways to cut out sugar.

The X3 Home Gym System comes with the following warranty:

All things considered, I think this is a pretty fair warranty on this product and it’s a lot better than the simple 30-day money back guarantee they used to offer.

It would be nice (and great for marketing) to see a lifetime warranty on the bar, but that’s probably a little unrealistic.

And a year on the bands is pretty fair- no matter how heavy-duty they are, all resistance bands will eventually break down over time.

Overall, I think this is a pretty good warranty for the X3.

The actual price will vary a little depending on promotions and sales, but the regular price for this system (which includes the bar, the plate, and 4 bands) is around $500.

For a resistance band system, this a steep asking price.

That said, the X3 is a lot heavier duty than most resistance bands on the market.

Actually, I’ll be honest and say I’ve never seen resistance bands that can offer more resistance than these. The bar is high-quality too- heavier duty than most of the competition, so there’s that.

And the heavier-duty a band is, the more expensive it is.

For the sake of comparison, Rogue’s Monster bands, which can go up to 200 lb worth of resistance, cost upwards of $50 – 60 per band (depending on resistance).

I mentioned in my intro that the marketing for the X3 made some pretty astounding claims. Here are a few of the claims found on the X3 website:

Although their website spends a lot of time trying to sell us on how state-of-the-art this product is, to me it’s just a quality resistance band system.

Nothing more, nothing less.

All the talk about how the X3 is state-of-the-art variable resistance training at its best is just that- talk.

It’s good marketing and it’s got us talking about it, but I don’t think it means much.

And I can’t buy into the research they quote because the training methods in those experiments where different than the X3 system.

I actually wish they would back off a little with all these claims because I think the X3 Home Gym System itself is actually a really nice product.

It’s a portable resistance band set designed for heavy lifting and the bar and bands are awesome.

The price is high, but if it can prevent you from having to pay a gym membership or purchase a larger home gym it may be worth it.

Especially if you can get it on sale.