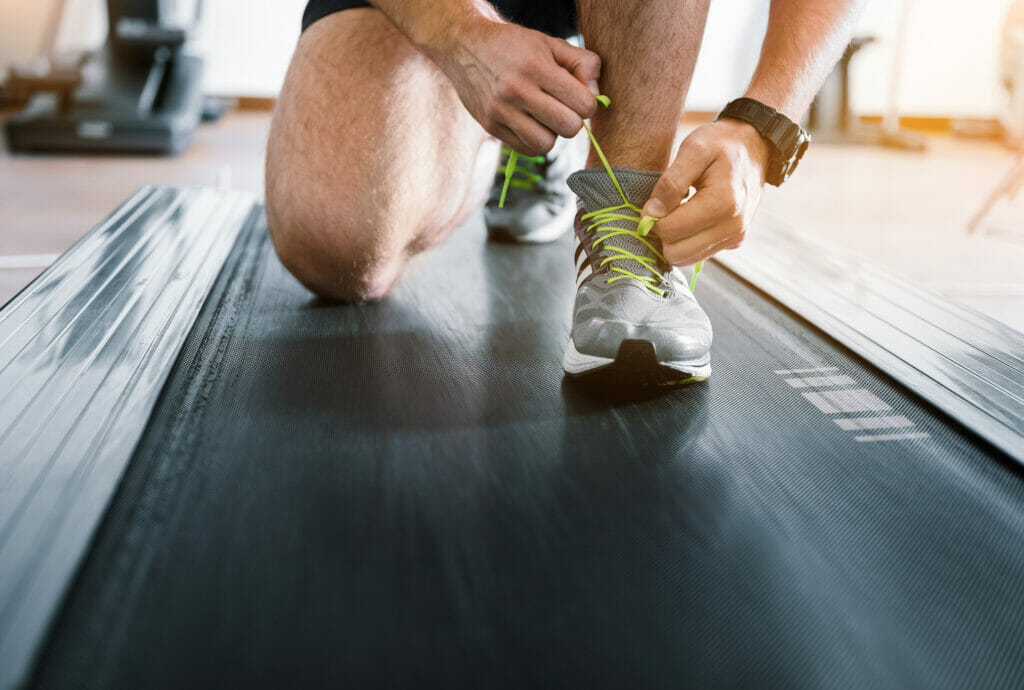 Even though NordicTrack’s ‘T-Series’ treadmills are a little out-dated when compared to their newer options, I still think some great deals can be found within this lineup.

And as the T-Series lineup goes, the T 9.5 S is the nicest one of the bunch.

This moderately-priced treadmill comes with some impressive performance specs, like a 3.6 CHP motor and a 20″ x 60″ running surface, but it’s the console that really steals the show here.

With a 14″ HD touchscreen display and quick-touch speed/incline buttons, the T 9.5 S is perfectly equipped for iFit streaming workouts.

The warranty could be longer, but this is the same guarantee NordicTrack offers on all their treadmills, so what can ya do?

Overall, I think the T 9.5 S is a nice treadmill with a lot going for it, but it might not necessarily be the best option when it comes to NordicTrack’s streaming treadmills…

In this review, I’ll go over everything this treadmill has going for it, as well as the areas where I think it falls a bit short.

After reading, you’ll know everything you need to in order to decide for yourself whether or not the T 9.5 S is worth investing in.

Alright, let’s do this.

NordicTrack’s a popular brand that’s been around for a long time and they’re still going really strong today.

They’ve really gone all-in with workout streaming and even though I have zero numbers to back this statement up, iFit has gotta be one of the biggest names in the streaming game.

And even though we’re seeing more and more streaming machines to choose from now, NordicTrack still has some of the best options on the market.

Anyway, as I mentioned in the intro, NordicTrack’s T-Series is an older series that you won’t see offered through them directly anymore, but you can still find them through other retailers like Amazon.

And they are still some great treadmills in this mix – like their T 6.5 S, which is likely one of the best treadmills $700 will get ya.

Well, the T 9.5 S is the highest-end model in the T-Series lineup and it’s going for around $1800 at the time of writing this.

I think the running surface is one of the most important specs to consider for any treadmill and I say that because this lowly stat tells you how much wiggle room you’ll have during your workouts.

You can look at the machines dimensions and footprint and all that, but this is the spec that really lets you know how much room you’ll have to work with.

This spec is measures in inches and usually written as “width x length” and it refers to the size of the belt.

And as you probably guessed, bigger is better.

If you’re looking for a treadmill purely for walking, you can certainly do just fine with smaller running surfaces, but if you’re taller or planning on running, it’s a good idea to pay attention to the size of the running surface.

Because if the belt is too short, you could find yourself having to shorten your stride, especially when running at faster speeds.

Anyway, the gold standard for quality home treadmills is a running surface of 20″ x 60″ and this is exactly the size of the T 9.5 S’s running surface.

At this size, walkers and runners of all heights should have plenty of room to stretch out as much as they need when running without running out of space (see what I did there??)

This is great, but I should mention plenty of treadmills in this price range come with even larger, 22″ wide running surfaces.

The extra width isn’t crucial for performance, but again, having more wiggle room is always a good thing.

In this case though, I wouldn’t necessarily consider this a deal breaker.

I also like to compare assembled weights because this is another spec that can tells us a lot about the overall feel and quality of a treadmill.

The idea being that a heavier treadmill should feel more secure and usually have an overall better build quality to it.

Treadmill weights will vary, but the heavier-duty treadmills in this price range will weigh somewhere in the 250 – 300 lb range.

With that in mind, NordicTrack doesn’t actual provide the assembled weights – instead, they give us the “in box weights”, which include the weight of all the packaging too.

So, we have to do a little subtracting to get an idea as to what the true machine weight is for their products.

I don’t know exactly how much the packaging for this treadmill weighs, but subtracting 40 – 50 lb seems like a conservative estimate to me.

The T 9.5 S comes with a package weight of about 254 lb, so assuming my estimate is at least a little accurate, that would put this treadmill’s assembled weight right around 210 lb… give or take a few.

This is quite a bit lighter than the heavier-duty treadmills in this price range (like Horizon’s 7.4 AT, which weighs 318 lb), so larger users might feel a little wobble here and there, but most users agree it feels pretty stable during workouts.

The T 9.5 S also comes with a weight capacity of 300 lb, which is pretty average for home treadmills, but it still allows it to accommodate most users.

Overall, the T 9.5 S is by no means the heaviest-duty treadmill in this price range, but it does come with a running surface large enough for users of all heights to workout comfortably.

If the running surface is the first thing I look for, the motor strength is a close second.

Having a strong motor on your treadmill is always a good thing because it’ll make for smoother operation at all speeds.

I doubt I’m the only one who doesn’t want their treadmill struggling to keep up during workouts.

Personally, I’m not a big runner, so I don’t make it too hard on my treadmill to keep up, but the point is the same – stronger motors don’t have to work as hard to provide the same output.

Most home treadmills come with motors in the 2 – 4 HP range and motors that are at least 3 HP are generally preferred for more frequent runners.

With this in mind, the T 9.5 S comes with a 3.6 CHP motor that can reach a top speed of 12 mph and a top incline setting of 12% (fyi, the ‘c’ in ‘CHP’ means ‘continuous’, meaning this is the power the motor can maintain for extended periods).

This is pretty strong for a home treadmill and certainly strong enough to keep up with walkers and runners alike.

I will say the max incline of 12% is a little short of the 15% some other similarly priced treadmills offer, so this might not be the best option for folks looking to train at more intense incline settings.

The last thing I want to mention here is that the T 9.5 S comes with 1.9″ rollers, which are also a little smaller than what some of the other top brands in this price range are offering (upwards of 2.5″)

The rollers are what the belt makes contact with, allowing it to propel along the deck and having larger rollers is a good thing because it usually means a smoother feel (as well as makes for a generally more heavy-duty machine).

Overall though, I like that this treadmill comes with such a powerful motor.

14″ HD touchscreen- the coolest feature on this treadmill is easily the large, touchscreen display mounted front and center. This screen is designed to pair with iFit and it makes viewing all your workouts and seeing all your stats very easy.

iFit- iFit is NordicTrack’s streaming app and you need a membership to access all their instructor-led workouts, metric tracking, and everything else it has to offer. NordicTrack includes a free year of iFit with purchase, then it would cost you ~$39/month to continue using it. You don’t have to have an iFit membership to use this treadmill, so you could always cancel it after your free trial is up.

Quick-touch controls- these buttons allows you to instantly set your speed and/or incline to preset values, making it easy to rapidly control your settings (a convenient feature for making your own interval workouts).

Bluetooth- the console is bluetooth compatible with headphones and chest strap heart rate monitors, although neither is included with purchase.

Media tray- this tray offers a nice place to put things like remote controls, phones, headphones, or anything else that might need storage near a treadmill.

Water bottle holders- and there’s even a place to hold 2 beverages.

The assembly process for the T 9.5 S is similar to most other home treadmills, although it does have a few extra steps some don’t.

Like all treadmills, you have to attach the 2 uprights and take care not to pinch any wires when snaking them through the upright for connection with the console.

By the way, this part can be more of a hassle than it needs to be, but be patient and you’ll get it.

You’ll also have to attach the console (smart to have a second person for this), connect the cross bar, and attach a few covers – all pretty standard stuff.

On the T 9.5 S, you also have to connect the hydraulic piston under the deck which controls the lowering of the deck – it’s not a difficult task, but some treadmills come with this already done for you.

Overall, most folks who are cool with following directions and putting stuff together should be able to get this treadmill assembled fairly painlessly.

I’d expect most people can get the job done in a couple hours.

NordicTrack offers the following home warranty on their T 9.5 S:

This is the same warranty NordicTrack offers on all their treadmills these days and it certainly works better on their more affordable models than it does on their higher-end ones.

In this case, I think it falls a bit short.

As I’m writing this, the T 9.5 S costs around $1800 and plenty of treadmills in this price range are offering lifetime frame/motor guarantees.

A year labor is pretty standard stuff, so no issues there.

Overall though, the warranty on this treadmill is pretty short for a treadmill in this price range.

So, to summarize things here, in terms of performance, the T 9.5 S has a good-sized running surface, a powerful motor, and a lighter-duty frame.

And when it comes to the warranty, there’s plenty of room for improvement.

But when it comes to the features, it scores highly, especially for folks who want to get into streaming workouts.

So, if you’re looking for a reasonably priced treadmill with a large HD touchscreen, the T 9.5 S could make a lot of sense – but before you purchase, I would highly recommend comparing prices with NordicTrack’s EXP 14i.

The EXP 14i is a newer model, being offered directly through NordicTrack, and it’s very similar to the T 9.5 S.

It comes with the same 14″ touchscreen, almost identical performance specs, same warranty… the most notable difference is that it can also decline down to -3% for downhill training.

It’s also priced very similarly, so again, I would compare prices before deciding…

Overall, I think the T 9.5 S is a solid treadmill for folks looking for a more affordable approach to streaming workouts, but the EXP 14i might be a better buy if the price is right.