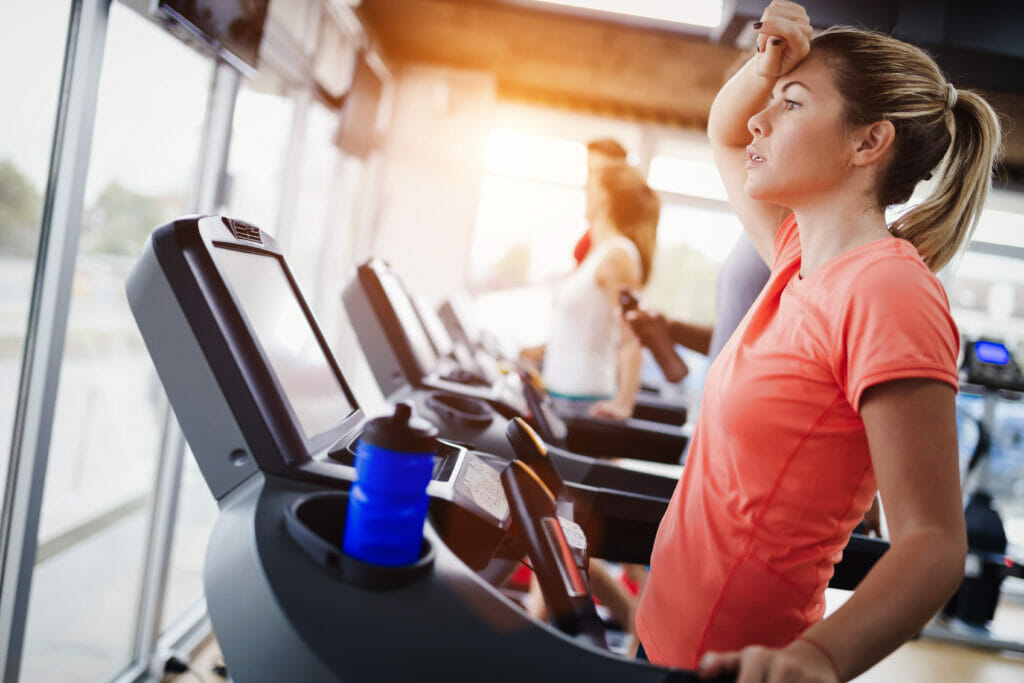 When it comes to affordable streaming treadmills, few have as much to offer as NordicTrack’s EXP 10i.

As the name might imply, this model comes with a 10″ HD touchscreen console for iFit streaming, but there’s more going on than immediately meets the eye.

It’s also equipped with NordicTrack’s FlexSelect Cushioning system that allows you to customize how much shock absorption the deck provides.

This is all great stuff, but the EXP 10i has a few flaws too – most notably, it’s not the heaviest-duty treadmill in this price range and its rollers could be larger.

But if you’re looking for a streaming treadmill in this price range, it’s easily one of the best options.

But I’m getting a little ahead of myself here.

In this review, I’ll be going over everything this treadmill does and doesn’t have going for it – I’ll also try to compare it to some of the other top treadmills in its price range so you can see how it measures up.

After reading, you’ll know whether or not the EXP 10i is the best option for your home gym.

The NordicTrack EXP 10i Treadmill 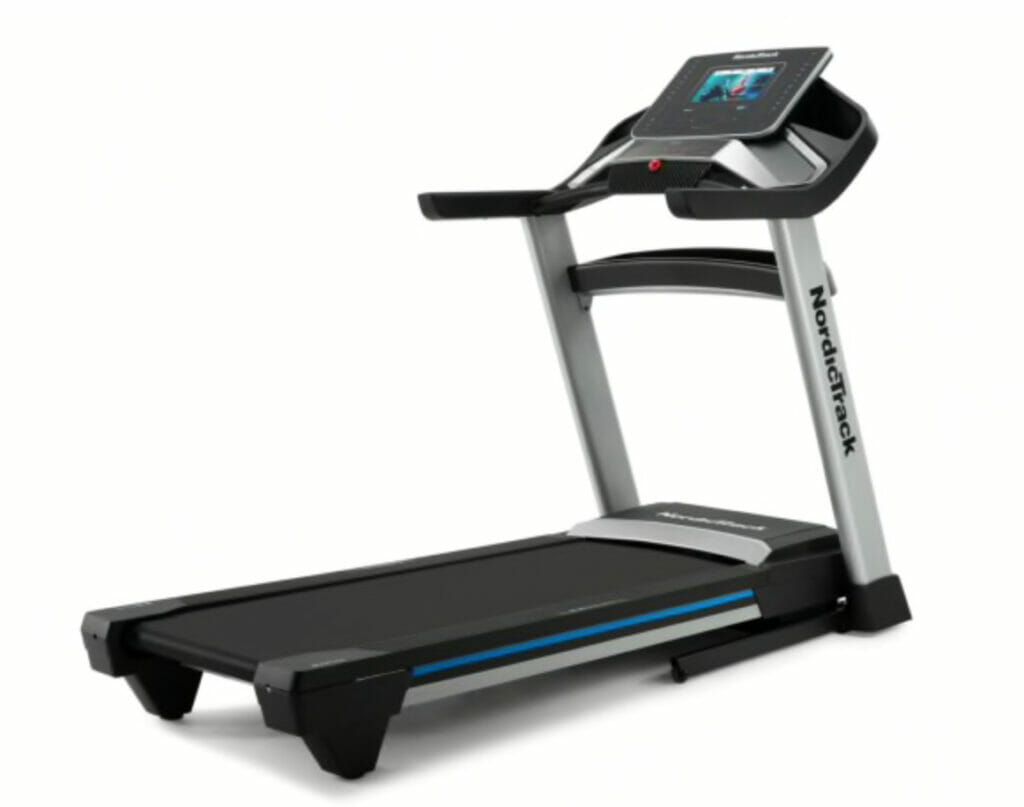 We all know the NordicTrack name.

This is a brand that’s been around forever and they’ve become highly popular for their home cardio machines and more recently, their iFit streaming platform.

These days, all of their products are geared directly toward iFit streaming, so if you aren’t interested in joining the streaming movement, NordicTrack might not be the best brand for ya.

But if you’re ready for home fitness streaming and everything it offers, NordicTrack is a great brand to check out.

Anyway, they have a large lineup of products to choose from, including several different series of treadmills.

The treadmill we’re here to go over now is part of their “EXP” series, which also has the EXP 14i and EXP 7i (the numbers refer to the screen sizes, but there are a few other subtle differences too).

The “EXP” treadmills aren’t as heavy-duty as their “Commercial” series models and they can’t reach the crazy inclines of their “Incline” trainers, but they’re also quite a bit more affordable too.

The 10i comes with a 20″ x 60″ running surface, which is large enough to comfortably fit runners of most heights.

The running surface tells us how much room we’ll have when using the treadmill and having more space is always a good thing in my book.

I mean, even if you’re not worried about having to shorten your stride, it’s still nice to have a little extra wiggle room around ya.

Anyway, most treadmills in this price range come with at least a 20″ x 60″ running surface and some even come with a slightly larger, 22″ width for an even roomier feel (like Sole’s F65).

So, the EXP 10i scores nicely here.

But I also like to get an idea as to how “heavy-duty” a treadmill’s going to feel and to do that, I look to the machine’s assembled weight.

Heavier machines are harder to move, meaning they should move less while you’re on ’em.

That said, NordicTrack doesn’t exactly tell us their assembled weights, instead they give us the “in box” weights, which also include the weight of the box and any packaging.

Not a huge deal, just makes it a little more challenging to compare weights between NordicTrack treadmills and other brands.

But we can still try – all we have to do is subtract a little weight from these in box figures to get an idea what the true weight of the treadmills are.

In this case, I’m not exactly sure how much the packaging for the 10i weighs, but I think subtracting 30 – 40 lb or so is very conservative.

Assuming that’s at least fairly accurate, that assembled weight isn’t bad for a treadmill in this price range, but there are certainly heavier-duty models.

For example, the F65 mentioned earlier weighs in at around 262 lb; and Horizon’s similarly priced 7.4 AT weighs in at 318 lb (which to be fair, is crazy heavy-duty, but still).

So, there are much heavier-duty treadmills in this price range, but none of these treadmills come with HD touchscreens either.

It’s also worth mentioning that the 10i comes with a weight limit of 300 lb, which is pretty standard for any decent home treadmill.

Heavier-duty models tend to come with even higher capacities, but at 300 lb, the 10i should still be able to handle most users safely.

Oh, I wanted to mention NordicTrack’s FlexSelect cushioning system too.

This is their shock absorbing system and it allows you to choose how much bounce the deck provides to cushion your workouts.

If you’re looking for a firmer, more road-like experience, you can decrease how much cushioning the deck provides, but if you’re worried about your joints and want more cushioning, you can set it to that way too.

It’s nice to have options.

Overall, this treadmill comes with a nice large running surface and I like the idea of being able to customize your shock absorption.

The treadmill itself could be a little heavier duty, but it should still be robust enough to offer a stable feel during workouts.

Moving on, time to talk motors.

Basically, the stronger your motor is, the less it has to work to get its job done.

This makes for a smoother feel because the motor won’t have to struggle, but it also tends to mean a quieter workout too.

Most home treadmills are packing motors somewhere in the 2 – 4 HP range (and we’re talking DC motors here; there are some home models with AC motors, but those are usually found on the commercial grade treadmills).

With this in mind, it’s impressive to see that the 10i comes with a 3.5 CHP motor.

This is near the top of our expected power range for home treadmills and it’s also easily enough muscle for regular running at faster speeds.

I would even say that the 10i’s motor is one of its most impressive features, although I guess that HD touchscreen console is pretty cool too.

With this motor, the 10i can reach a top speed of 12 mph, which is pretty standard for a home treadmill.

It can also reach a top incline of 12% and even a decline angle of -3%, meaning you can include downhill training into your workouts.

Personally, declines on a treadmill don’t make a ton of sense to me, but I guess if you were trying to mimic walking/running downhill for road race training purposes I could see it.

I guess declines could come in handy for eccentric training purposes too – controlling yourself while running downhill isn’t exactly easy.

Regardless, with the 10i, you have the option to train at various incline angles, which is a good thing.

The only thing that isn’t especially impressive in this category is the size of this treadmill’s rollers.

At only 1.9″, the rollers on the 10i are a little small compared to other treadmills of similar quality.

(By the way, the rollers are what the belt glides along and having larger ones makes for smoother operation and improved overall durability).

Most quality home treadmills come with rollers somewhere in the 2- 3″ range, so the 10i falls a bit shy here.

Overall though, users seem to be impressed with how this treadmill performs and that motor is really strong for a machine in this price range.

The NordicTrack EXP 10i Treadmill comes with the following features:

10″ HD touchscreen console- the touchscreen display on this treadmill is a hallmark feature and it’s essential for accessing and viewing all your workouts. At 10″, it’s pretty small compared to the televisions we see on some of their other machines, but it’s still big enough for easy viewing.

iFit- this treadmill is obviously designed for iFit, NordicTrack’s fitness streaming platform. Through iFit, you get access to unlimited instructor-led workouts, scenic routes, metric tracking, etc. It costs $39/month and technically isn’t required to use this treadmill, but I don’t see the point of investing in the 10i without iFit.

Automatic Trainer Control- oh, there’s also this cool feature that can control your speed and incline settings automatically to match what the instructors are saying during workouts. This way you can relax and just try to keep up (but you can always control your settings manually too if you prefer).

Bluetooth- the console is bluetooth compatible with headphones and heart rate straps, although neither is included with purchase.

Cooling fan- there’s a built-in fan to help keep you comfortable during those more challenging workouts.

One touch controls- you can instantly set your speed and/or incline with the push of these convenient buttons located on the console.

Water bottle holders- and don’t worry, there’s plenty of room for your water bottles too.

If you decide to purchase the EXP 10i, getting it assembled shouldn’t be too challenging.

NordicTrack’s assembly manual is pretty easy to follow and the process itself is pretty straightforward, although I will say this model has a few more steps than some other treadmills.

Like most, you have to attach the uprights to main deck and snake the console wires through the right side (which is usually more of a hassle than it should be).

Then you’ll have to connect the hand rails and cross bar and attach the console itself (it’s handy to have a second set of hands for this part).

Unlike some of other treadmills though, you also have to manually attach the hydraulic piston that helps raise/lower the folding deck.

This shouldn’t be that challenging, but a lot of other treadmills come with this step already completed.

Overall though, if you or a family member is at least a little handy (or good at following directions), you shouldn’t have too much difficulty getting the 10i assembled.

NordicTrack backs their EXP 10i with the following home warranty:

This is NordicTrack’s standard warranty these days and they back pretty much all of their equipment with this same guarantee.

Generally speaking, we should expect more expensive treadmills to come with longer warranties, so the fact that their $3k models come with same warranty as their $1k models might be a little discerning.

In the case of the EXP 10i, this warranty isn’t awful, but there’s definitely room for improvement.

10 years on the frame is decent, but most of the top treadmills in this price range are offering lifetime frame guarantees (think Sole, Horizon, LifeSpan, Spirit).

And 2 years on parts again, isn’t awful, but it’s still a little low compared to the 3-5 years brands like Sole and Horizon are offering on their comparable models.

A year on labor is standard stuff, no concerns there.

But overall, it would be nice to see a longer warranty on the 10i.

All things considered, I like this treadmill and I think it has a lot going for it.

That said, I think it makes the most sense for people who are planning on using iFit because as I think I’ve illustrated, there are heavier-duty treadmills with longer warranties in this price range.

But, none of these treadmills come with HD touchscreen consoles that make it so easy to access instructor-led workouts.

And none of these treadmills come with decline capabilities or Automatic Trainer Control features either.

There is ProForm’s Pro 2000, which is priced pretty identically and it also comes with a 10″ console and almost identical performance specs (motor is just a hair weaker), so you might want to price check with that model to compare.

But overall, if you’re looking for an affordable streaming treadmill, I think the EXP 10i makes a lot of sense.