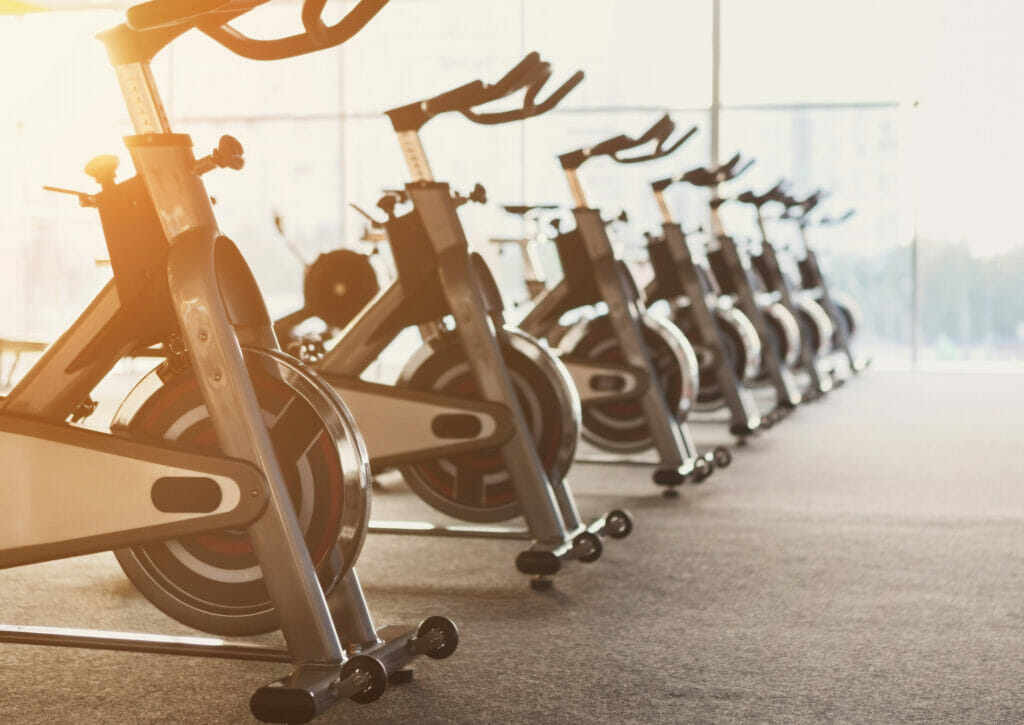 If you’ve been searching for an exercise bike lately, you may’ve noticed that the weight of the flywheel is always discussed. If a bike comes with a heavy flywheel, the manufacturer will boast this fact and go into why having a heavy flywheel is better.

But when it comes down to it- does an exercise bike’s flywheel weight really matter?

Well, if you’re looking for a good workout, then yes, flywheel weight does matter.

Ok, fine, but which is better- light flywheels or heavy flywheels?

The answer to this age-old question will require a little more discussion. Fortunately, this is just the question I’m here to discuss.

In this article, we’ll dive head first into this debate as we look at both sides. After reading, you should know everything you need to to decide for yourself which camp you belong in.

What Is A Bike’s Flywheel?

First things first- all exercise bikes use a flywheel to create the resistance for you to work against. On spin bikes, it’s easy to see the flywheel because it’s clearly visible (it’s the big disc sitting in the front or back of the bike).

This disc is connected to the pedals via a chain (chain drive) or belt (belt drive). As you pedal, the flywheel spins.

If your bike uses a magnetic resistance system, there will be magnets on either side of the spinning flywheel. The resistance is increased by moving these magnets closer to the flywheel (the flywheel is made out of metal, which is magnetic by the way).

Moving the magnets away from the metal disc reduces the resistance.

Regardless of which type of resistance a bike uses, you can see how the flywheel is necessary to create it.

And even though we can’t see the flywheels on traditional upright bikes and recumbent bikes, they are still in there. Most home ellipticals also use weighted flywheels and those systems usually work very similarly to exercise bikes.

Oh, pretty much any flywheel you see now will be “perimeter weighted”, meaning most of the weight is positioned on the outside of the disc.

Marketers love to say that their bike has a “perimeter weighted flywheel”, but in reality, they all do- it doesn’t mean anything.

Ok, we all know what flywheels are and why they’re important to the function of our exercise bikes. Now it’s time to get to the good stuff. 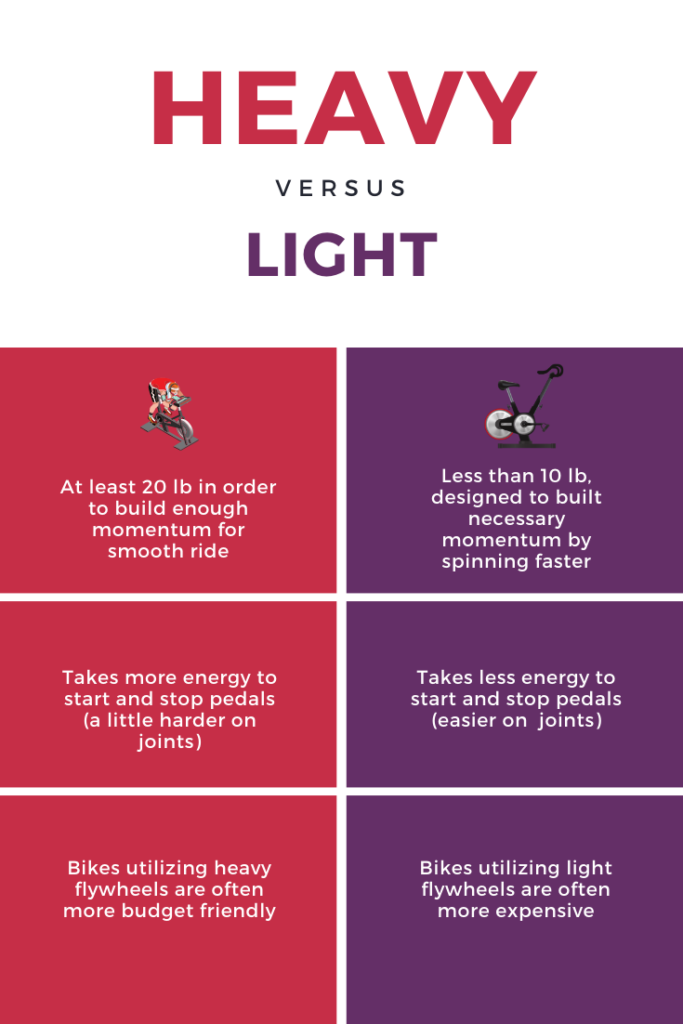 Most people, myself included, start with the weight of the flywheel when reviewing an exercise bike. And this is because the flywheel is directly related to providing the resistance and feel of the bike.

And by “feel”, I mean how smooth or fluid it is during its pedal action.

Does the bike offer a continuous, smooth acting pedal action or does it feel choppy or uncomfortable to pedal? The answer to this is largely based on the flywheel.

In order to get a smooth feeling ride, the flywheel needs to build momentum as you pedal. This momentum helps the pedals continue moving throughout your pedal stroke, eliminating any unwanted gaps or pauses between strokes.

Generally speaking, the more momentum your flywheel builds, the smoother your ride is going to be.

There are 2 schools of thought when it comes down to the best way to build this momentum: heavier is better or lighter is better. Let’s discuss each on its own.

Most home exercise bikes try to increase the flywheel’s momentum by giving the flywheel more weight. A heavier flywheel takes more initial energy to get it moving, but once it is moving, it wants to keep moving longer.

People who are looking to mimic the feel of riding outside usually prefer heavier flywheels because they take more energy to start from a cold start- just like a real road bike.

Think about riding a bike outside- you have to push harder until you get moving. Once you start rolling, it gets easier to pedal (unless you’re going uphill of course).

This is what a heavy flywheel mimics.

Considering most exercise bikes are designed to work with heavy flywheels, it makes sense that going with the heaviest flywheel possible would result in the smoothest ride, right?

Well, not really, eventually it would get to a point where the damn thing was too heavy to get moving in the first place.

Personally, I consider any flywheel over 20 lb to be “heavy”. I think this is a good place to draw a line in the sand and say, “anything heavier than this, is heavy enough to get the job done”.

That said, a lot of bikes these days, especially spin bikes, are coming out with 30 – 40 lb flywheels. Some are even going into the 50 lb range.

Bikes with flywheels this heavy are going to be able to build a lot of momentum as you pedal, which is going to make for a smooth ride.

Of course, when that heavy flywheel gets moving, it’s going to be harder to slow it down too (something to keep in mind if you have achy joints).

So, when it comes to flywheels and building momentum, it makes sense why heavy flywheels would be preferred- the extra weight simply builds more momentum, which helps keep those pedals moving seamlessly.

So then what’s the deal with luxury bikes like the Keiser M3i which is famous for its 8 lb flywheel?

There are a few manufacturers who are producing amazing spin bikes that run smoothly by using a light flywheel.

Keiser and their M3i is the most famous example, but there are others too that are trying to mimic what Keiser has mastered (like Sunny and their SF-B1709).

The key to making a light flywheel successful is in the speed at which it spins.

Increasing the speed at which the flywheel is spinning is also going to increase the amount of momentum it builds, which is going to create that fluid pedaling motion which we are looking for from a quality bike.

In the case of Keiser, I’m pretty sure I read somewhere that the flywheel spins 11x for every full pedal stroke- that’s crazy fast.

Keiser was able to create this fast flywheel system through the design of their gears that produces such a high gear ratio. The result is a very fast flywheel, which wouldn’t be possible if the flywheel was heavy.

Unlike heavy flywheels, lighter ones don’t take as much energy to start or stop. This is great for achy or sensitive knees, but it might not mimic the feel of a road bike as much as a heavy flywheel bike does.

Bikes that successfully utilize a light flywheel system can create a very comfortable riding experience, but it’s all about the speed at which that flywheel is spinning.

Which brings me to an important point- just because a bike has a light flywheel doesn’t mean it’s optimized for increased flywheel speed.

There are plenty of exercise bikes out there that are geared the same way as traditional heavy-flywheel models, but come equipped with light flywheels.

These bikes are not going to provide the same feel as a bike like Keiser that is designed specifically to use a light flywheel.

Ok, exercise bikes come in all shapes and sizes. They all use a flywheel of some sort and these flywheels can be heavy or light.

Great- but which is better?

I wish I could provide a cut and dry answer to that question, but it all depends on what you’re looking for.

Something you should keep in mind, is that most home exercise bikes are designed with a system that would benefit from a heavier flywheel.

Keiser is an obvious exemption because they’ve designed a light flywheel system that works wonderfully. And there are other brands out there trying to copy their success.

But in order for a light flywheel to work as well as a heavy one, it has to spin much faster- if the bike isn’t designed to get that flywheel moving fast enough, the resulting workout experience will suffer for it.

Another thing to consider is that going with a heavy flywheel is a usually a much more budget friendly way to go.

Keiser is awesome, but it does cost $2k. Let’s be real, not everyone is working with that kind of budget.

So if you’re working with a tighter budget, I’d recommend going with a heavy flywheel system.

If you’re looking for a spin bike, but are dealing with arthritis in your knees, you may be better off with a light flywheel that doesn’t require as much effort to start and stop (light flywheels tend to be a little less “jarring” on the joints as well).

I know I’ve been referring to spin bikes a lot throughout this article- this is because flywheel weight is usually associated most with these bikes that are designed for high intensity workouts.

But flywheel weight is an important consideration for upright and recumbent bikes too, especially if you’re looking for a bike that can provide a more strenuous workout.

Just like spin bikes, upright and recumbent bikes that utilize lighter flywheels will likely be significantly more expensive. The fact is, increasing flywheel weight is the most affordable way to provide a smooth ride.

Ok, I feel like I’m starting to ramble on a bit here, so I think it’s time for me to sum things up:

When it comes to flywheel weight, I think heavier is the way to go for most of us. It’s a pretty safe bet that an exercise bike with at least a 20 lb flywheel is going to provide a fairly smooth ride. These bikes tend to be more cost effective than advanced bikes that properly utilize a light flywheel.

Alright, that’s all I got for now. I know that’s about as clear as mud, but ultimately it really does come down to personal preference.

I’d love to hear what you think about the topic. Leave a comment and let’s get the discussion going.