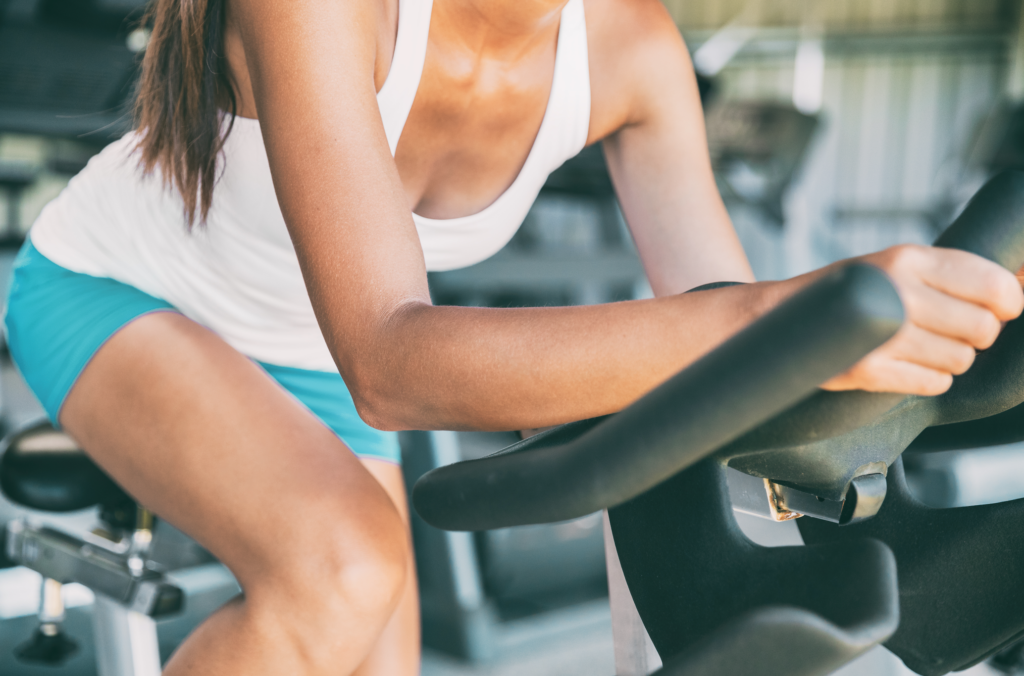 The Sunny Health & Fitness (SHF) Evolution Pro Magnetic Belt Drive Indoor Cycling Bike (which I’ll refer to as simply the “Evolution Pro” from now on) is one of the most affordable belt driven exercise bikes around.

With features that can rival the elite spin bikes, the Evolution Pro could just be the exercise bike you’ve been looking for. But can such a budget friendly bike really compete with the big boys?

That’s what we’re here to find out. My goal here is to provide a thorough review of the Evolution Pro and then compare its key features to the more expensive indoor cycles to see how it measures up.

Let’s start with a quick lesson on the two features Sunny emphasized in the incredibly long name of this cycle.

What Is Magnetic Resistance?

Fitness brands like to advertise the fact that they use “magnetic resistance” a lot these days, so it’s a good idea to understand what they’re talking about.

As you pedal on an indoor cycle, the flywheel spins. If you aren’t familiar, the flywheel is the large wheel in the front of the bike. All exercise bikes have one, but they are particularly noticeable on spin bikes because they are exposed. Also because flywheel weight may be more important, but more on that below.

To create adjustable resistance, the bike needs a way to slow down that flywheel, making it harder for you to pedal.

Older bikes (and lower end cycles today) accomplished this through direct contact resistance. In this setup, the bike uses a felt pad or set of brake pads that physically touch the flywheel. As you increase the resistance level, the brake comes into more contact with the flywheel, increasing the amount of friction you have to overcome to pedal.

Decreasing the resistance is accomplished by reducing the amount of contact between the brake and the flywheel, making it easier to pedal.

Direct contact resistance is effective, but with time the brakes or felt pads breakdown and have to be replaced.

Either way, the result is a smooth resistance system with no touching parts. Since the magnets never actually touch the flywheel, there is less noise and significantly less chance for breakdown (which means less maintenance for you).

Magnetic resistance should always be expected on the mid-range and high-end bikes. Budget bikes are likely to still be using the less expensive direct contact resistance systems.

SHF also made a conscious choice to advertise the fact that their Evolution Pro uses a belt drive system. This is a good marketing call because belt drives are usually found on the more expensive models, but in order for it to make a difference to you it’s important to know what it all means.

Exercise bikes, especially indoor cycles, are designed to operate a lot like regular outdoor bicycles. You pedal and a wheel turns. The biggest difference obviously is that on stationary bikes when you pedal, you remain stationary.

Road bikes use a chain to connect the pedals to the wheel- this is a chain drive. Most exercise bikes use the same mechanism because it’s effective and provides a realistic simulation of riding a road bike.

In belt drive systems, the chain has been replaced by a belt. It doesn’t really affect the operation of the bike or the quality of your workout, but there a couple of advantages.

Belt drives are quieter than chain drives because you don’t hear the metal links catching the teeth of the gear. Belt drives are actually almost completely silent, which comes in handy if you like to work out at night or early in the morning and you don’t want to wake up family members.

Belt drives are also virtually maintenance free. Chain drives should be lubricated every once and awhile to keep it running smoothly. This isn’t necessary with belts.

Higher-end exercise bikes have switched over to belt drive systems because they are quieter, smoother, and require less maintenance.

SHF has made a name for themselves for providing high-quality, budget-friendly home fitness equipment. They offer a little bit of everything home fitness related, but I think their indoor cycles are where they really shine. Their bikes are known for having heavy flywheels and sturdy construction. They usually come highly-rated by users too.

SHF offers around 30 different indoor cycle models, all with slightly different design aspects and features. Comparing them all can be a little exhausting, because many of them are very similar. The Evolution Pro is one of their more robust, heavy-duty indoor cycles.

I like to start at the flywheel when reviewing spin bikes because a lot of emphasis is usually placed on them. It’s generally believed that heavier is better because the momentum that builds up as you ride creates a smoother, more authentic feel. Different bikes utilize different flywheel weights, but generally speaking, the heavier the flywheel- the more expensive the bike.

SHF has found a way around that cliché and have been packing their budget bikes with heavier than normal flywheels. The Evolution Pro comes with a 44 lb flywheel, which is a lot heavier than the normal 30-35 lb flywheel found on other cycles.

A lot of people like the idea of heavier flywheels, but can you really tell the difference between the feel of a 34 lb and 44 lb flywheel? I’m not sure. Experienced cyclists probably can, your average recreational athlete maybe not.

Luckily, SHF doesn’t make us pay more for the heavier flywheel, it’s included in the budget friendly price on the Pro.

The heavy flywheel combined with the magnetic resistance and belt drive system results in a quiet, smooth workout experience. Users all seem to agree, regardless of their overall take on the bike, that the Evolution Pro provides an exceptionally smooth ride.

Users also agree that the magnetic resistance works effectively to create plenty of resistance for an intense workout. Regardless of your fitness level, the Evolution Pro should be able to work you hard enough to get as intense a workout as you want.

The most important feature to consider when comparing seats on spin bikes is whether or not they are fully adjustable. All bike seats are height adjustable, but fully adjustable means you can adjust the horizontal (known as fore/aft) position as well. This is important on indoor cycles because it ensures a proper fit- making you more comfortable and less likely to injure yourself as you ride.

The Evolution Pro does come with a fully adjustable seat. Vertical and horizontal adjustments are easily made by turning the appropriate dials.

The included seat is standard and can be switched out with another bicycle seat easily. Spin bike seats, like road bike seats, are known for being uncomfortable, however there have been several users who actually commented on how comfortable the Evolution Pro’s seat is.

You get used to the feel with time, but if it doesn’t get better you can try a gel seat cushion- I use this one with my Diamondback 510Ic and it helps a lot.

This bike comes with multi-grip handlebars that are fully adjustable, meaning like the seat, you can control the height and fore/aft position. This is a nice touch, since not all indoor cycles (even the nicer ones) let you adjust the fore/aft.

That said, there have been some complaints from users that the bolt used for holding the fore/aft position can loosen during use, requiring you to retighten periodically throughout your ride. If this happens often, it could become really annoying.

At first glance, this bike just looks like a beast. The frame is thick and oversized when compared to other models. The Evolution Pro has a heavy-duty steel frame with a max weight capacity of 330 lb, which is significantly higher than most spin bikes regardless of price range.

Most nicer exercise bikes have a weight limit of 300 lb. Budget bikes tend to be in the 225 – 250 lb range. With a weight capacity this high, the Evolution Pro is able to safely hold larger users that other bikes wouldn’t be able to accommodate.

Speaking of assembly, putting this bike together is straightforward. The instructions are easy to follow and the illustrations make sense. This bike doesn’t come with a monitor (which is a con in my book), but at least you don’t have to worry about fishing wires through the frame during assembly.

The Evolution Pro comes with standard cage style pedals. These are pedals that are designed to be used with regular sneakers, no cleats necessary. If you want to use SPD or another style of clipless pedals, you can switch them out easily enough.

We should expect more expensive indoor cycles to come with clipless pedals. Bikes in this price range rarely do. If you’ve never used cleats before, they definitely give you an advantage. You can pedal faster and more efficiently when your feet are attached to the pedals.

The Evolution Pro comes with the following warranty provided by SHF:

I’m a fan of SHF as a brand, but no one is perfect- and the warranty department is usually where SHF falls short. The truth is, budget brands usually can’t offer the same quality warranties as the more expensive brands. After all, there are reasons the budget bikes cost less.

That being the case, I think the warranty Sunny is offering on the Evolution Pro is actually pretty solid. For a bike well under $1000, 3 years on the frame is in the right ballpark. High-end spin bikes that cost over $1000 more only offer 5-10 years on the frame.

It would also be nice to see at least 12 months on parts, but again, the financial savings at purchase should be considered.

The Evolution Pro vs The Big Boys

I wanted to finish this review with a quick comparison of this bike to 2 of the most elite home spin bikes around: the Schwinn AC Performance Plus and the Keiser M3i. Both bikes are best in category contenders and both are significantly more expensive. Take a look and see how they compare:

I’m not here trying to say you can get the same caliber of bike for $600 that you can get for $2000. There’s no doubt about it that both the Schwinn and Keiser bikes are superior. Instead, I’m trying to illustrate how many impressive features the Evolution Pro is packed with.

I also don’t want to suggest that all magnetic resistance and belt drive systems are created equal.

But it’s still pretty interesting to see how many similarities there are between the Evolution Pro and the elite indoor cycles. On a side note, this chart also points out how impressive Schwinn’s warranties are.

Sunny Health & Fitness is known for creating budget friendly exercise bikes with respectable stats (and really long names), but the Evolution Pro Magnetic Belt Drive Indoor Cycle could be their masterpiece. In a price range where we’d be happy to get one advanced feature, the Evolution Pro offers several, including: magnetic resistance, a belt drive, and high weight capacity.

The warranty could be longer, but for the price it’s actually pretty solid, especially when compared to some of the more expensive models. The biggest flaw I see is that a monitor isn’t included- it would be nice if SHF threw in a simple computer to track cadence, time, and distance.

Overall though, Sunny is known for making great spin bikes and the Evolution Pro is no different. Personally, I think it’s actually one of the best spin bikes currently available.

If you’re looking for a good indoor cycle and don’t want to spend thousands, this is a smart buy.