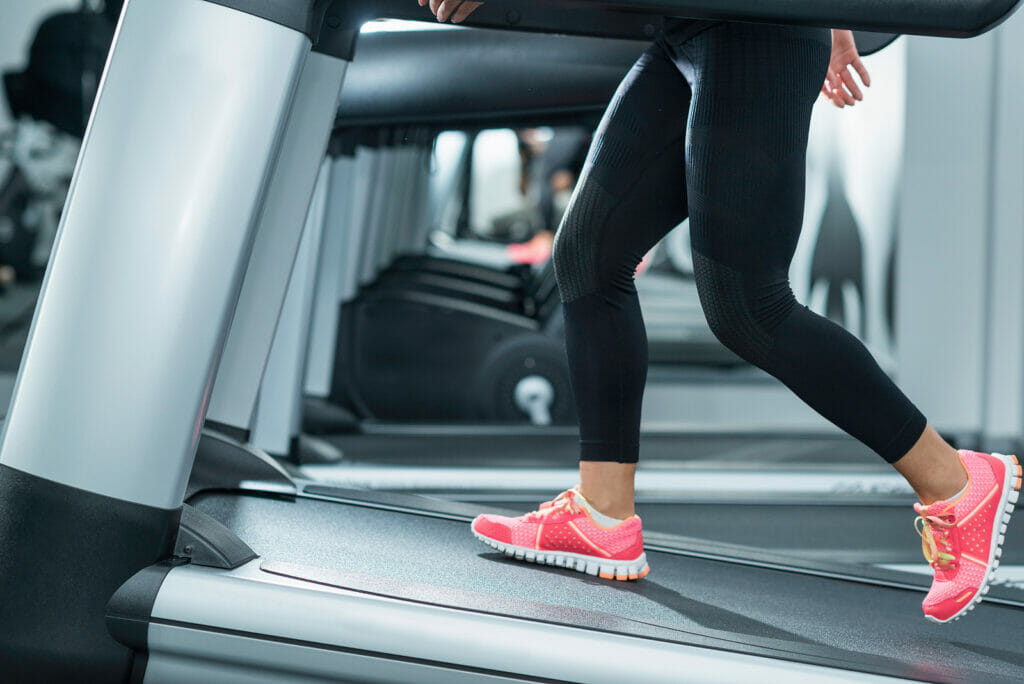 Sole’s F80 and NordicTrack’s Commercial 1750 are easily two of the best treadmills in the ~$2k price range and when it comes to performance, there are quite a few similarities between them.

But when it comes to console features, these treadmills couldn’t be any more different.

The Commercial 1750 comes with a large, HD touchscreen console for streaming workouts, while the F80 comes with a more straightforward, traditional display.

There’s also a big difference in the warranties offered by these two brands as well, but more on that in a bit.

If you’re stuck choosing between these 2 elite treadmills, it might give you a little peace of mind to hear that there’s really no wrong answer here, they’re both awesome treadmills for the price.

But I know that doesn’t really help anything, so I’ll do ya one better – in this guide, I’ll compare the Sole F80 and the Commercial 1750 head-to-head, discussing how all their specs and features stack up against each other.

I’ll also throw in my 2 cents regarding which treadmill I think is best for whom.

After reading, you’ll know which one of these machines is the better fit for your home gym.

The Sole F80 vs NordicTrack’s Commercial 1750

It’s no secret I’m a big fan of Sole, but I think NordicTrack’s a good brand too.

I like Sole because they’re products are usually heavier-duty than everyone else’s in their respective price ranges and the fact that they offer the longest warranties.

But when it comes to streaming workouts and higher-end consoles, they certainly aren’t the top choice.

NordicTrack, on the other hand, has become a leader in the streaming movement and I don’t have any numbers to back this up, but I assume iFit is the most popular streaming platform at the moment.

The fact that you can use the same iFit account for all their treadmills, bikes, ellipticals, and pretty much everything else NordicTrack offers is a pretty sweet deal.

When it comes treadmills, both brands have several great models to choose from, but we’re here to discuss the F80 and the Commercial 1750 specifically (click links to see full reviews).

Let’s start things off by going over the performance specs each has to offer and then we’ll get to the tech features shortly after.

The running surface spec refers to how large the belt is and it’s one of the most important stats to examine before buying any treadmill.

Here in the States, the running surface is measured in inches and usually written as “width x length” and it’s important because it instantly tells you how much room you’re gonna have during your workouts.

I’m of the opinion that more room is always a good thing, but you want to know that you’ll at least have enough room to stretch out fully when running.

Anyway, when it comes to their running surfaces, the F80 and Commercial 1750 score identically – they both come with the same 22″ x 60″ running surface.

This is also about as large a running surface as you can expect to find on a home treadmill (there are some treadmills with belts longer than 60″… but not many).

So, the F80 and Commercial 1750 both come with large, spacious running surfaces, but let’s dive a little deeper and check out some other frame features.

I also like to compare assembled weights because I feel this spec gives us a good idea as to how stable we can expect a treadmill to feel during use.

We’re all striving for that rock-solid, commercial grade feel from our treadmills and going with a heavier machine is a good way to get it.

And that’s because heavier treadmills should feel more stable and secure, being less likely to wiggle around or feel wobbly during workouts.

The F80 comes with an assembled weight of 278 lb, which is quite heavy for a treadmill in this price range.

The Commercial 1750 comes with an in box weight of 340 lb… which isn’t the same spec as an assembled weight.

The “in box” weight also counts the weight of the box and packaging, so we have to subtract something from this to get an estimate of what the true weight of the treadmill is.

If we subtract this from the in box weight, we’re left with an estimated assembled weight somewhere in the 280 – 290 lb range… which is even a little heavier than the F80’s.

Assuming we’re in the right ballpark here, this means both treadmills are very heavy – which is a good thing.

The F80 also comes with an impressive weight capacity of 375 lb, allowing folks of all sizes to safely use it.

At only 300 lb, the 1750’s weight capacity is actually pretty average for such a heavy-duty machine.

My guess is that NordicTrack keeps their weight limits a little lower to ensure there aren’t any issues with the decline functions, but I’m not certain.

Anyway, both treadmills also fold vertically for storage, which is helpful when floor space is an issue.

Overall, both treadmills come with the same running surface and very heavy frames; the only real difference here is the F80’s much higher weight limit.

When it comes to performance, the motor is what most of us are probably thinking of.

Having a strong motor is always a perk, especially when it comes to running at faster speeds – simply put, stronger motors operate more efficiently, making for a smoother workout.

And considering most home treadmills (especially in this price range) max out at around 4 HP, that means both of these treadmills are packing very strong motors.

And with motors this strong, both treadmills are well-equipped for running at top speeds.

Speaking of which, the F80 and 1750 both come with a top speed of 12 mph (5 min/mile pace), so you won’t have to worry about either treadmill being able to keep up with ya.

NordicTrack is one of the only brands that offers decline capabilities, so if you like the idea of training downhill for added variety, this is certainly something to consider.

The rollers are what the belt actually makes contact with, allowing it to glide smoothly over the deck.

Treadmill rollers come in various sizes, but it turns out having larger ones is beneficial because they make for smoother operation (as well as put less stress through the belt and rollers themselves).

Well, the F80 and the Commercial 1750 both come with 2.5″ rollers, landing them both on the larger end of that range.

Overall, these 2 treadmills are very similar when it comes to this department – both come with 3.5 HP motors, 2.5″ rollers, and a top speed of 12 mph.

The only difference here is that the 1750 has decline capabilities, while the F80 does not.

In terms of performance, the F80 and Commercial 1750 are very similar, but we see a lot of differences when we move on to the console features.

At first glance, it’s hard to miss the 14″ HD touchscreen console sitting in front of the 1750 – it’s large, impressive, and gorgeous.

The F80 on the other hand, comes with a 9″ LCD console that’s neither HD or touchscreen.

The 1750’s touchscreen is there for workout streaming through iFit, NordicTrack’s streaming service.

iFit isn’t mandatory, but without it you can’t access any of the instructor-led workouts, the metric tracking, the scenic routes, or the Automatic Trainer Control feature (automatically sets speed/incline settings to match workouts).

In other words, that huge console would be wasted without iFit.

You get a 30 day free trial of iFit with purchase of the 1750, but then iFit would cost ya $39/month for as long as you want to keep using it.

The console on the 1750 can tilt and pivot to make viewing easier when doing workouts off the treadmill and it comes with impressive, built-in speakers for quality sound.

Other features found on the Commercial 1750 include quick touch speed/incline buttons and a built-in cooling fan.

The F80’s console isn’t nearly as fancy, but it’s still large and brightly-lit, making it easy to see all your stats during workouts.

And even though the F80 isn’t designed as a streaming treadmill, it’s still got some nice features to offer, including:

The F80 is also bluetooth compatible with the STUDIO streaming app, where you can follow along with instructor-led workouts and track your metrics.

The STUDIO app is pretty basic compared to iFit, but it still offers a nice alternative for folks who aren’t all-in on streaming, but like the idea of using it when they want (plus it’s a lot cheaper than iFit).

Overall, these 2 treadmills differ greatly when it comes to their console features – the Commercial 1750 is a streaming treadmill, Sole’s F80 is not.

This fact alone will likely be the most important factor when deciding between them.

That said, the warranties on these 2 treadmills are pretty darn different too.

Sole offers the following home warranty on their F80:

That is literally one of the best warranties you’ll find on a treadmill in this price range.

You obviously can’t beat a lifetime guarantee for the frame, motor, and deck, but 5 years on parts is really generous too.

Sole even doubles what most brands offer on labor.

NordicTrack on the other hand, offers the following home warranty on their Commercial 1750:

Yea, it’s not hard to see the differences here.

Ten years on the frame isn’t nearly as good as a lifetime guarantee, but it’s the parts department where we see the biggest difference – 2 years is a lot shorter than 5.

And a year on labor is standard, so no issues there.

Overall, Sole offers a much better warranty than NordicTrack and this is certainly something to think about when deciding between these 2 treadmills.

I should also mention that NordicTrack’s customer service has a really bad reputation for being hard to contact and taking forever to get back to people.

To be fair, most large fitness brands have this issue (Sole has their fair share of complaints as well), but NordicTrack’s customer service seems to be a bit more notorious than most.

Ok, I think that about does it for all the major performance specs and features these 2 treadmills have to offer.

After looking at all this stuff, I think it’s easy to see why the F80 and Commercial 1750 have become so popular.

In terms of performance, these treadmills are very similar – they both come with motors of the same strength, equally sized running surfaces, and frames that are more or less equally heavy-duty.

They both also come with the same sized rollers and folding capabilities.

But when you look at the features, these 2 treadmills are very different – the Commercial 1750 is designed for streaming workouts; the F80 is not.

So, if you’re interested in accessing iFit and everything that streaming platform has to offer, the Commercial 1750 makes a lot more sense.

If you don’t like the idea of having to pay a monthly membership and instead just want a straightforward, traditional treadmill, then Sole’s F80 makes more sense.

Sole also offers a much better warranty, which is worth considering, but if you want a streaming treadmill, this is something you’ll have to give a little on.

All things considered, I respect both of these treadmills and think they both have a lot to offer. And as I said at the beginning – there aren’t any wrong answers here when choosing between them.

Ultimately, it just depends on what you’re looking for from your home treadmill.