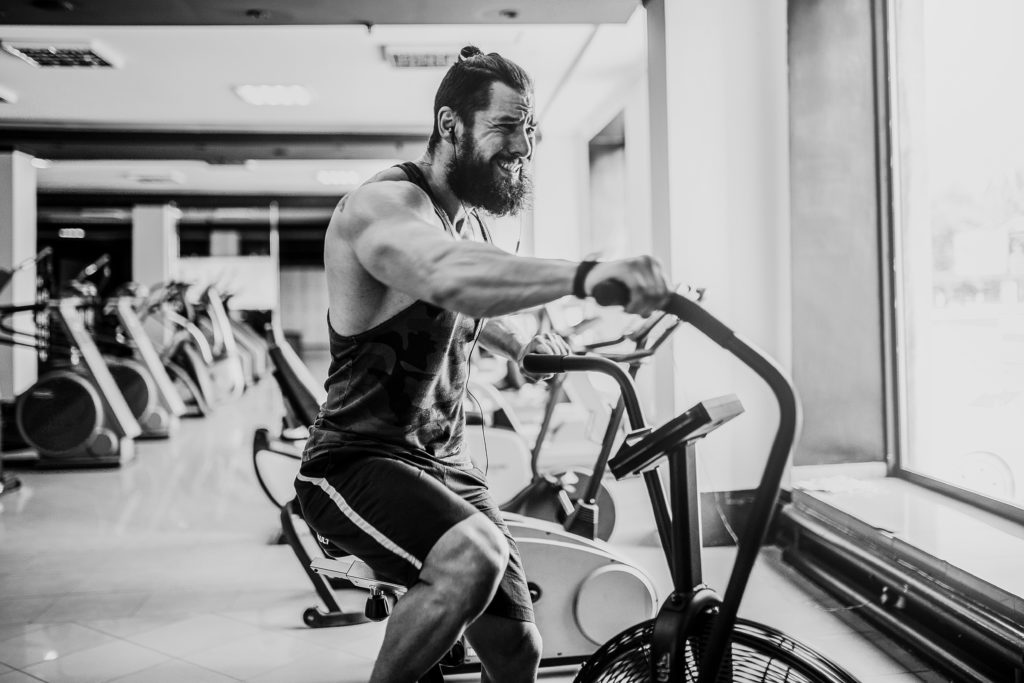 Rogue’s Echo Bike is an air resistance model designed with CrossFit athletes in mind. With a heavy-duty frame, fully-adjustable seat, and belt-driven steel fan, it works perfectly with the HIIT style workouts CrossFitters love to do.

It’s no wonder this is the only cardio machine Rogue produces – after all, when you get it right on the first try, there’s no need to waste your time coming up with other products.

If you’re looking for a high-end fan bike to add to your home gym, the Rogue Echo Bike is a great choice. But instead of just taking my word for it, keep reading.

This review will go through all the specs and features this bike has to offer. After reading, you’ll either be as impressed as I am or you won’t. Either way, you’ll know whether or not this is the right bike for you. 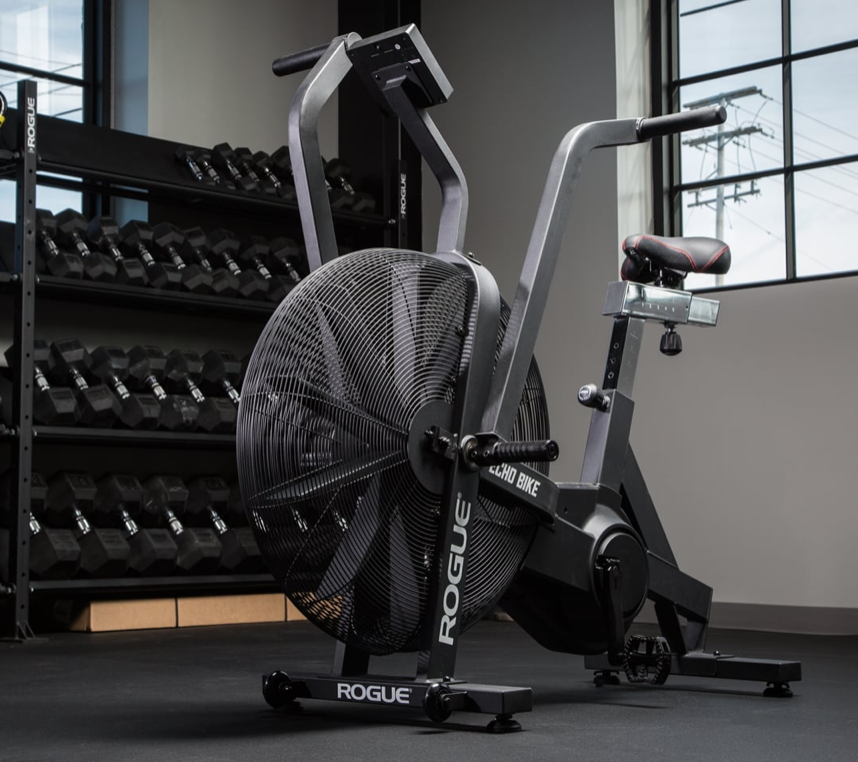 Rogue Fitness is a well-known home fitness brand specializing primarily in power lifting gear- barbells, squat racks, power cages, and all the accessories to go with that stuff.

They’ve become a popular brand for CrossFit athletes too, because CrossFit incorporates a lot of that gear in their workouts.

Rogue offers really nice equipment at fair prices. They use the highest-end steel and most robust hardware you’ll find on home units. Most of their stuff is as tough as the equipment you’d find in any commercial gym.

They’re also known for backing their products with long warranties.

I mentioned in the intro that the Echo Bike is the only cardio machine they produce. You can buy a few other cardio machines through their website, but they aren’t part of the Rogue brand.

You can actually get the Assault AirBike and AirBike Elite through their website, which I find surprising because those bikes are the Rogue Echo’s biggest competitors.

Anyway, I think Rogue developed their Rogue bike to go along with all the other CrossFit gear they already offer. CrossFitters love fan bikes because of the intense interval work you can do with them. CrossFit competitions often include fan bike portions.

I want to make sure everyone is on the same page when it comes to air resistance (or fan) bikes before we dive in too deep here. Fan bikes are a type of exercise bike that uses a fan to create the resistance.

Although they’re pretty rudimentary in terms of technology, these are some of the most effective cardio machines in the world. Keep in mind that simple doesn’t mean the same thing as easy.

The best part of a fan bike is that there is no limit on the amount of resistance it can provide- the harder you push, the more resistance it will give ya.

And this is why they work so well for interval style workouts where you want short bursts of all out exertion.

In order for an air resistance bike to withstand the types of forces that are put through it during these intense workouts (especially when we’re talking about literally some of the fittest people on the planet), it needs a tough frame.

And to say that the Echo has a tough frame would be an understatement.

Rogue builds this bike with a thick, heavy-duty steel frame and then adds a black powder coat to reduce chances of corrosion (plus it gives it a great look).

My first impression of this bike is that it just looks dense. Comparing it to similar models, the Echo looks larger and thicker in the frame. When looking at the specs, we see there’s good reason for that- this thing weighs 127 lb.

This is roughly 30 lb more than the Assault AirBike Classic.

The extra weight makes for a more stable foundation. You won’t have to worry about this bike moving during your workouts because it’s heavy enough to stay put. Even with folks weighing up to 350 lb going all out on it.

The fan blade is also steel and is propelled by belt drive system making for a smooth and quiet ride- well, quiet for an air bike anyway.

The handles have been welded directly to the arms on the Echo, so you shouldn’t have to worry about any wear and tear issues there.

There are also metal foot pegs attached to the fan, giving you the option to only “pedal” with your arms if you like- which works well as an upper body blaster.

Overall, when it comes to frame integrity, the Rogue Echo scores highly. With a heavy, solid steel frame and 350 lb weight capacity, this bike is robust enough to handle the toughest workouts you can throw at it.

I always like to look at the seat when researching bikes. Most air bikes come with standard bicycle seats, meaning they’re pretty small and pretty uncomfortable.

If you cycle on a regular basis, you’re used to it, but for those who don’t- don’t be surprised if your rear end is a little sore after the first few rides.

Don’t worry, you get used to these seats. And if you don’t, you can always get a seat cushion to make them more forgiving.

Anyway, comfort aside, it’s important for quality bike seats to be fully adjustable. This means you can adjust the height and horizontal (fore/aft) position of the seat.

The Echo does come with a fully adjustable seat, allowing you 8 different height adjustments and 5 different horizontal positions to choose from.

Not all air bikes offer fully adjustable seats, but I highly recommend them. Having the horizontal adjustment will ensure you can find a comfortable fit.

The Rogue Echo Bike comes with the following features:

1″ transport wheels- this bike is heavy and that’s a good thing, except when it comes to moving it around your home. Luckily, the good people at Rogue saw this dilemma coming a mile away and included large transport wheels in the front. With the 1″ wheels, you won’t have any trouble tilting and rolling the Echo away as needed.

Heart rate monitor compatible- this bike doesn’t come with a heart rate monitor, but it’s compatible with Polar chest straps (like the H10 and the T31C, both of which can be purchased separately from the Rogue website).

Accessory compatible- you can purchase a few other accessories and attach them to your Echo if you like. These include the wind guard and the phone holder, both of which can attach directly to the frame of the bike. The wind guard will block some of the air coming from the fan, making your workouts a little less windy. The phone holder’s purpose is pretty self-explanatory. You can also buy Shimano pedals to swap out for the standard ones included, in case you want to use cleats.

Putting the Echo together shouldn’t be an issue, it’s a straightforward procedure and all the necessary tools and hardware are included.

It only takes a few bolts and nuts to get the job done- most of the bike comes preassembled.

All you have to do is attach the front and rear stabilizers, the pedals, handles, and console. The seat comes pre-attached, which is nice.

The trickiest part with assembling exercise bikes is usually snaking the wires that attach to the console through the frame, but even that isn’t that bad.

Overall, I bet most folks can have this bike unboxed and assembled within 30 minutes. Because of its weight, it’s a good idea to have a second person around to help with positioning the bike (especially when attaching the stabilizers).

The Rogue Echo Bike comes with the following warranty:

My only real complaint about this product is the short warranty. Two years for a product of this caliber is short, especially for the frame.

I wouldn’t be that worried about the frame breaking down because this bike is built like a tank, but it would still be nice to see a longer guarantee.

So the Echo comes with the shortest warranty of all the top models in this class- that just goes to show you no product is perfect.

I think it’s pretty easy to see that Rogue’s Echo Bike is a high-end cardio machine. It’s designed from the get go with quality and performance in mind. Based on what I know about Rogue Fitness, I wouldn’t expect any less.

The stand out features for me are the super heavy-duty frame, high weight limit, and belt drive system.

On paper, the Echo looks a lot like the Schwinn AD7 I mentioned above. Both have heavy frames, high weight capacities, and belt drives. The biggest difference is the warranty, where the AD7 is clearly the winner.

The Assault AirBike is another clear competitor. When you look at the specs, the Echo has it beat: heavier frame, higher weight capacity, and quieter belt drive.

But the AirBike comes with a longer warranty and is about $100 cheaper, making it a smart choice for those looking to save a little cash.

The heaviest duty air bike of them all is the Assault AirBike Elite, which is heavier than them all, comes with a better warranty (but still not as good as Schwinn’s) and even comes with a wind guard included.

But that bike costs about $500 more than the rest.

The point is, the Rogue Echo can stand toe-to-toe with the best air bikes in the world and hold its own. Choosing between these 3 models is tough and depends on what your personal preferences are- there are no wrong answers here.

When comparing these bikes, I tend to lean toward the Assault AirBike and the Rogue Echo because they’re CrossFit tested and approved.

If Rogue would only extend that warranty a little, it would be easier to pick a winner. But then the debates might not be as fun.

Regardless, their one and only cardio machine is a masterpiece and is easily “one of” the best air bikes on the market. Highly recommended.