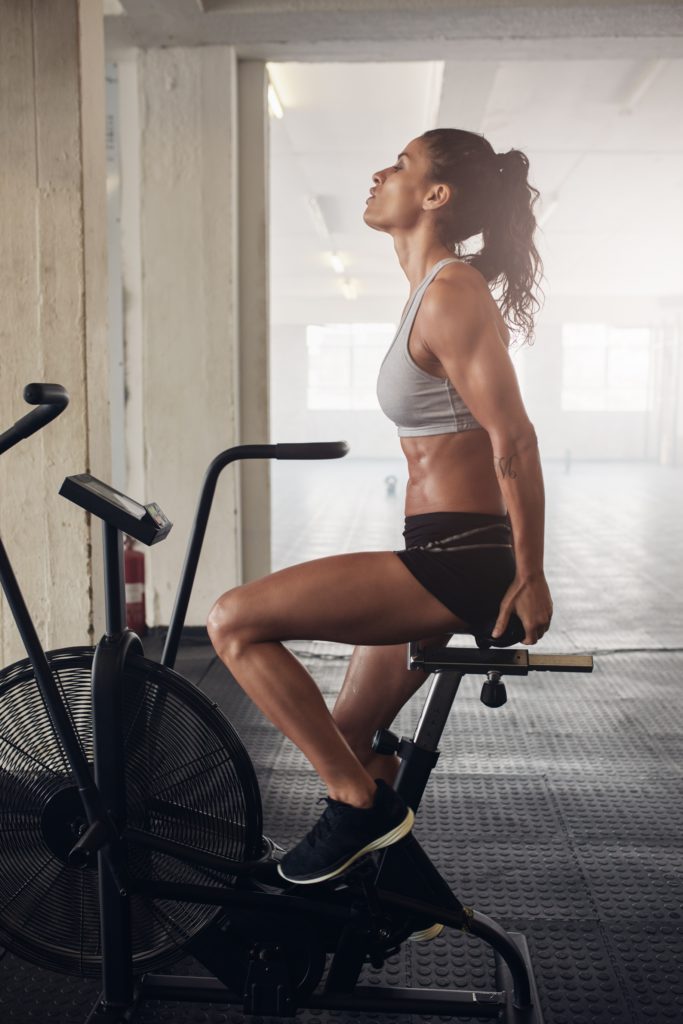 The AssaultBike Elite is the upgraded version of the highly popular Assault AirBike – you know, the fan bike used worldwide by the military, professional athletes, and in Crossfit competitions.

Yeah, well as if the classic version wasn’t tough enough already, Assault Fitness decided to up the ante with the Elite model.

Improvements were made to the handlebars, display console, and seat to name a few. Not to mention this bike is heavier and more durable than the AirBike Classic.

Well, I’m hoping to answer these questions for you and more with this thorough review.

What Is An Air Bike?

Air bikes, also known as fan bikes, make up their own category in the home exercise bike world.

They get their name from the fact that they use air to produce the resistance you are working against. Well, more specifically, it’s the fans attached to the flywheel pushing against the air that creates the resistance.

They’ve been around for about 40 years or so- Schwinn created the first airdyne (their version of the air bike) bike in the late ’70s.

They seemed to disappear for awhile, but have really made a comeback in the last decade or so.

This is likely due to the rising popularity of Crossfit and HIIT style workouts.

These hight intensity workout styles have started using air bikes because these types of bikes can offer unlimited resistance.

That’s right, the harder you pedal, the more resistance you get. This allows you to really crank up the intensity, making them perfect for interval training.

And with the moving handles you can get your upper body and core involved too – an advantage air bikes have over most other exercise bikes.

It also makes you burn a lot more calories than a traditional upright exercise bike.

More calories burned means more fat burned, which leads to weight loss- one of the primary exercise goals for a lot of people.

So, to summarize, air bikes:

I guess it makes sense that they are making a comeback, they really have a lot to offer.

But, that doesn’t mean they are right for everyone.

If you aren’t interested in intense workouts or don’t like interval training, you should probably consider another type of bike.

If you are looking for an exercise bike to mimic the feel of riding on a road bike, this isn’t the right bike for you either (you should be looking at spin bikes).

As the name implies, this is an air bike. It’s also produced by Assault Fitness, a division of the LifeCORE Fitness company that is based out of California and primarily produces bikes and rowers.

Assault Fitness only makes a few products, but you what they say about quality over quantity.

Assault Fitness’s goal is to make fitness equipment that is designed to last.

Products that are built tough to withstand taking punishment from elite athletes for years – and their AssaultBike Elite is the perfect representation of that mission statement.

It’s been mentioned that the resistance is provided by spinning fans.

This system is great because it allows for unlimited resistance. As you get stronger and are able to pedal harder, you will meet more resistance from the AirBike.

It’s impossible to outgrow this bike because the resistance will grow with you.

Ball bearings have been placed at pretty much every moving joint to improve durability and to make operation smoother.

Some people like the swishing sound and cool air in their face when working out on a fan bike. Personally, I’m a fan of the fan…sorry, I couldn’t resist.

But in case you don’t like all that fresh air coming at ya, Assault Fitness includes a windshield to block some of this air from crashing into you during your workout.

And it’s removable if you do like to feel the air.

The AssaultBike Elite’s frame is made out of solid steel, the seat post is solid aluminum, and the cranks are solid steel as well.

There’s also a coat on the frame to resist corrosion from all the sweating you’ll likely be doing on it.

Speaking of which, this bike weighs a whopping 138 lb fully assembled, which is roughly 40 lb more than the classic AssaultBike.

The AssaultBike Elite is big and heavy- and it was built like this on purpose. The extra weight gives it more durability and allows you to feel more stable on it during use.

Fan bikes, much like spin bikes, are notorious for having uncomfortable seats. They are small, hard, and just outright painful to sit on for extended rides.

The seat on the AssaultBike Elite is nothing too fancy, but it has been enlarged to make the longer rides a little more comfortable.

Users don’t seem to mind from a comfort point of view.

The important thing to know about the seat is that it is fully adjustable. You can adjust the height and horizontal position (fore/aft) of the seat easily by pulling a pin.

Having a fully adjustable seat is important to ensure proper fitting during your workout, and not all fan bikes offer this feature.

For example, the AD7 is the only airdyne bike that offers a fully adjustable seat.

You’ll also notice how thick and solid the seat post is on the AssaultBike Elite (solid aluminum). You shouldn’t have to worry about any wobbling or unwanted movement during your workouts.

Although this bike receives very few complaints, the ones it does get are usually regarding the console – most users are surprised by how simple it is.

There really is nothing fancy here, but most people that are using this bike aren’t looking for a bunch of pointless bells and whistles.

The display screen is good sized, but there are no HD colors or displays.

It does have built-in workout programs for intervals, heart rate, and goal oriented results.

Just keep in mind that the workout programs don’t control the resistance during the workouts, they just tell you what to do (like sprint for 20 sec, etc).

Again, the resistance is directly controlled by how hard you pedal.

Most users agree putting this bike together is fairly straightforward.

Most folks are able to do so in 1-2 hrs depending on how handy you are and if you have assistance or not.

It’s possible for one person to assemble by themselves, just keep in mind that this bike is heavy, so it is a little cumbersome to move until you attach the stabilizers with the transport wheels.

All of the necessary tools are included, except for a Philip’s head screwdriver.

Make sure you keep all of the provided tools so you can perform the recommended maintenance (making sure everything stays tight).

Users are also happy that everything actually fits together the way it is suppose to. This is really a testament to how well built and well designed the AssaultBike Elite is.

This bike has a weight capacity of 350 lb.

This is a great weight capacity for a home exercise bike and it actually competes with a lot of the commercial machines.

High-quality bikes should have max weight limits in the 300 – 350 lb range, so well done Assault.

Plus keep in mind the kind of intense exercise you are doing on this type of bike. It has to be built like a tank to withstand a 350 lb athlete cranking on it during those HIIT workouts.

The Assault AirBike Elite comes with the following warranties:

This warranty is really good when you look at what the other top comps are offering.

Ten years on the frame matches Schwinn’s guarantee and is much longer than what Rogue offers on their Echo Bike (I’m not sure why they only offer 2 years, that thing is also built like a tank).

And 3 years on parts is longer than Schwinn’s 2 year guarantee.

A year on labor is standard operating procedure across the board, so nothing too interesting there.

Going through that stats for the Elite, it’s hard to deny that this bike has a ton to offer. Unfortunately, all this awesomeness comes at a pretty high price.

This is actually one of the more expensive air bikes I’ve come across. I want to do a quick comparison to the also awesome AirBike Classic to see if the upgrades justify the extra expense.

The first, and probably most obvious difference between the 2 bikes is how more robust the frame is on the Elite.

The Elite is just thicker everywhere you look. Comparing the total weights for each bike, you see that the Elite weighs about 40 lb more than the Classic.

This means the Elite is going to be more stable and durable. It’s going to feel like a commercial machine.

The seat on the Elite has been upgraded too. It’s a little wider, which will make it more comfortable, especially for longer workouts.

The weight capacity on the Elite is 50 lb greater than that of the Classic. This is a pretty impressive upgrade, especially for the larger folks looking for an intense workout.

If you are nearing the 300 lb weight limit of the Classic, it might be a good idea to pay extra for the Elite model.

The warranty on the Elite is just a little better: you get an extra year on the parts and a 1 year labor warranty. Again, not sure this is a huge decision making difference or not.

That’s about it for the major differences between the two.

The consoles are pretty comparable, but the Elite is a little more sophisticated- the read outs are a little larger and more attractive.

The last big difference we should address is the $500 price difference between the 2 bikes.

Now, there is no question that the AssaultBike Elite IS a better bike than the Classic.

It is bigger and stronger with the reinforcements included in the frame and seat. But the big question remains: is the Elite worth the extra money??

In all honesty, for most users, probably not.

Most folks working out recreationally in their home gyms probably aren’t going to notice the difference.

I think the Elite is a smart choice for the larger athletes- the folks that are reaching that 300 lb limit.

I also think the Elite would be a smart choice for situations where there are multiple users performing intense routines regularly.

Like a Crossfit gym or some other small commercial type situation.

Otherwise, I think most other users would do just as well with the AssaultBike Classic.

There’s really not much to complain about here – this is one beast of an exercise bike.

With a rock solid frame, a large steel fan, and extra bulk pretty much everywhere, this air bike is well-equipped to handle the toughest athletes on the planet.

It also has a fully adjustable seat, an impressive weight capacity, and a solid warranty backing it up.

This is a Crossfit athlete’s dream fitness bike, capable of providing the most intense workouts you can fathom.

Is it the best air bike in the world?

But is it the smartest buy for your home gym?

If you’re looking for the heaviest-duty bike around, it might be worth the extra cash, but I think a lot of people will do just fine with the AssaultBike Classic.

And of course we can’t forget the competitively priced Echo Bike, which is almost as heavy-duty as the Elite.

Overall though, there’s no denying this is one hell of a bike.