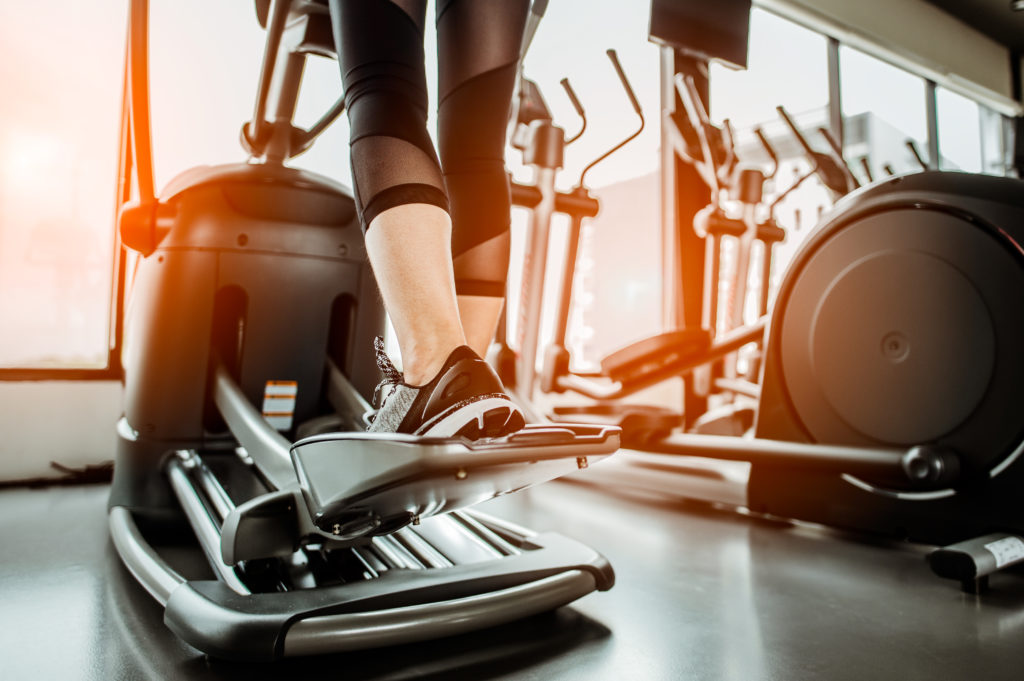 Elliptical machines usually come in 2 varieties based on where the flywheel is located- front drive and rear drive (although there is a 3rd, less common type known as center drive).

This system for categorization can be convenient when it comes to grouping ellipticals, but should it be used alone as a decision making factor?

And while it’s true each group shares certain traits, there are still plenty of differences between ellipticals in each category that should be considered when looking for a new model.

In this article, we’ll discuss the key differences between front drive and rear drive ellipticals. We’ll also discuss whether or not the location of the flywheel makes that big a difference in the grand scheme of things.

Elliptical machines have become a popular choice for home gyms because they’re generally comfortable to use and have become increasingly affordable.

And when it comes to home fitness equipment, comfortable and affordable goes a long way.

Ellipticals where designed to provide a means of exercise that mimicked the feel of jogging but without the unwanted joint discomfort.

We have the bright minds at Precor to thank for the first elliptical cross trainers back in the ’90s. Their original patented design included a rear drive system, meaning the rear drive design predates the front drive system.

Precor of course patented this design, which means other brands had to come up with something different if they wanted to add elliptical machines to their arsenal (or pay Precor for the rights to include a rear drive system).

And this is how front drive ellipticals were born.

Along the road, center drive ellipticals also emerged. These machines tend to cost more, but they do have their advantages. Such as smaller footprints and longer stride lengths.

Center drive ellipticals aren’t that common yet, but NordicTrack offers several in their FreeStride Trainer Series.

These days there are plenty of quality ellipticals to choose from in each category.

I should probably back up a little and make sure we’re all talking about the same thing here. When I say front “drive” or rear “drive”, I’m talking about where the motor or flywheel is.

The flywheel on an elliptical is the part that spins as you pedal, creating the resistance for you to work against (just like on a spin bike).

On a front drive machine, this flywheel system is located in the front of the elliptical.

This design tends to give these ellipticals a feel more like walking uphill, or climbing a hill. Some have the feeling that is more comparable to climbing stairs (or a combination of uphill and stairs).

But generally speaking, these ellipticals tend to have more incline possibilities (something to consider if you’re looking for a machine with a lot of incline).

Because of this inclined position, users tend to feel like they have to lean forward more when exercising on front drive ellipticals (leaning into the handlebars). This isn’t a bad thing, just a matter of preference.

Having the flywheel in the back of the machine gives the elliptical a different look and feel. Most prominently, these ellipticals tend to feel more level or flat during use- like walking or jogging on flat ground as opposed to a hill.

Having a flatter movement pattern gives rear drive ellipticals a more natural fee. Users report they feel more upright and don’t feel as if they have to lean forward as many do with front drive ellipticals.

This isn’t a given, but many rear drive machines also offer longer stride lengths than front drive ellipticals.

Having the flywheel in the back of the machine makes for a simpler design, requiring fewer moving parts. Fewer moving parts means fewer things that can breakdown and require fixing. It also usually means less noise.

But Does It Matter?

Ok, we’ve gone over the major differences between front and rear drive ellipticals and there are some significant differences that you may want to consider when looking for a new machine.

Incline is one. If you like the idea of having a lot of incline to play with, you should probably be thinking front drive because these ellipticals usually offer more in this department.

If you want a smoother, flatter workout experience, you may want to consider rear drive ellipticals because they usually offer a more fluid, natural feel.

But personally, the location of the flywheel wouldn’t be that high on my list if I was looking for a new elliptical. I think there are other considerations that take precedence.

More specifically, I’d be more interested in what the stride length is first and foremost. The stride length is the most important spec when it comes to comfort during use- too small and you’re going to feel cramped (and probably exercise less).

After stride length, I’d compare flywheel weights- heavier is usually better because it provides a smoother ride (aim for at least a 20 lb flywheel).

I’d also take a close look at warranties and weight capacities when comparing ellipticals- both of these specs tell you a lot about the overall quality of the machines (check out my elliptical machine buyer’s guide for more info).

And then there’s all the console features and tech stuff you may or may not be interested in.

After I examined the above stuff, then and only then would I be interested in comparing rear vs front drive ellipticals. And personally, I don’t think the location of the flywheel makes much difference.

If I had to choose, I’d probably go with a front drive model- I like the idea of having more incline and a smaller foot print (plus I’m a sucker for Sole).