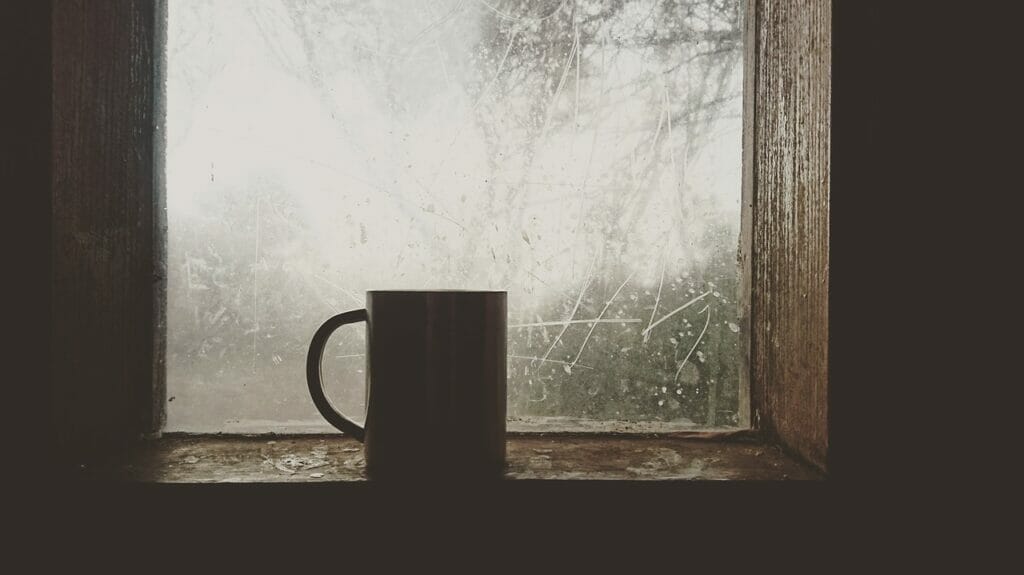 Healthy drink alternatives are everywhere these days and I have to admit, I ignore most of them.

But when I saw a commercial for MUD\WTR (the cool way of depicting mud water), my curiosity got the better of me and I found myself ordering the starter kit within minutes.

Self described as a healthy alternative to coffee, this chai tea/mushroom water hybrid is certainly unique, but is it really worth investing in (it’s certainly not cheap either)?

Well, that’s a personal question, but I’m more than happy to share my experience with the muddy concoction.

Let’s start from the beginning. 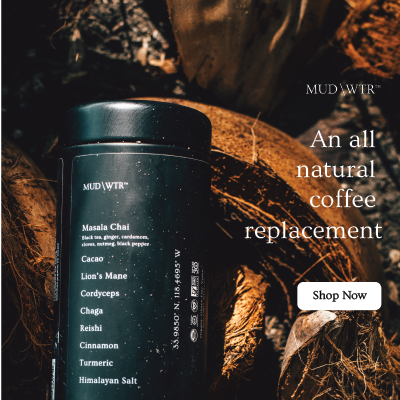 I’m not a coffee drinker, so my interest in mud water (I’m tired of typing it out in its chic, proper form) was sparked more from a healthy hot beverage point of view.

Over the last couple of years, I’ve really gotten into drinking hot teas (mostly black teas) and even more recently, gone all in on matcha.

I never thought I really liked green tea, but I’ve come to love match and would probably drink it now even if it wasn’t so good for me.

But I’m really glad it is.

Anyway, when I saw the commercial for mud water on YouTube, I thought it could be a good alternative to my morning hot tea/matcha.

Plus, let’s be real – the idea of drinking mushroom water was too intriguing to pass up.

So, I went online, checked out their website for like 20 min, and ultimately ended up purchasing their “morning ritual starter kit” (more on that later).

But back to what this stuff really is.

Mud water is a powder you add to hot water.

Unlike tea, there’s no steeping or anything like that – instead, you mix the mud powder directly into hot water.

If you look at the ingredients, the most prominent one is the organic mushroom mix, which consists of chaga, reishi, Lion’s mane, and cordyceps.

I’m not gonna go into the possible health benefits of each because you can find all this info through mud water’s site (or elsewhere online), but the general take is that these mushrooms are really good for us.

Other than the mushrooms, mud water contains cacao (the raw precursor to cocoa), a spice blend (pretty much every healthy spice there is: cinnamon, turmeric, ginger, cardamom, black pepper, nutmeg, cloves), black tea powder, and a pinch of Himalayan pink salt.

All the ingredients listed above are organic and there isn’t any added sugar.

So, even if the health benefits from the spices and mushrooms are exaggerated (and I’m not saying they are), there’s really no way this stuff can be bad for ya.

Unless you’re allergic to mushrooms.

But How Does It Taste?

I’m not gonna lie, it took me a few times to start liking the flavor of mud water (and “like” might still be a strong word).

But, to be fair, it also took me a few tries to get the concoction right – turns out I was putting way too much powder in at first.

Well, with that first batch I probably had at least 2 tablespoons in 8 oz of water and it was a bit strong for my liking.

But when mixed correctly, I’ll admit it tases a lot better.

The chai tea flavor (black tea, cinnamon, ginger, cloves, cardamom, black pepper) is most prominent and you get a nose full of the spices before the hot beverage ever touches your mouth.

There’s definitely a peppery after taste too, bordering on mildly spicy, but not in a bad way.

I’m not a fan of spicy beverages (spicy margaritas just taste like heartburn to me), but I love black pepper, so I’m cool with this flavor profile.

The cacoa adds a faint hint of bitter chocolate and the earthiness of the mushrooms helps keep the spices from becoming overpowering.

When trying to describe to my brother what it tastes like (before he tried it), I told him it’s a little like a spicy, unsweetened hot chocolate.

And after he tried it, he agreed that description made sense.

Now I don’t care for the taste of coffee, so I can’t really speak to how mud water works as a coffee substitute, but my brother is an avid coffee drinker and he thought it worked quite well (flavor wise) as a substitute.

Mud water is certainly spicier than any black coffee I’ve had, but it’s got that whole bitter thing going on too.

In terms of color, it’s easy to see why the founder called it mud water, but it could also be mistaken for a blonde roast coffee in the right lighting.

Long-story-short, I think mud water has a very distinctive taste. I like matcha better, but mud water is starting to grow on me. 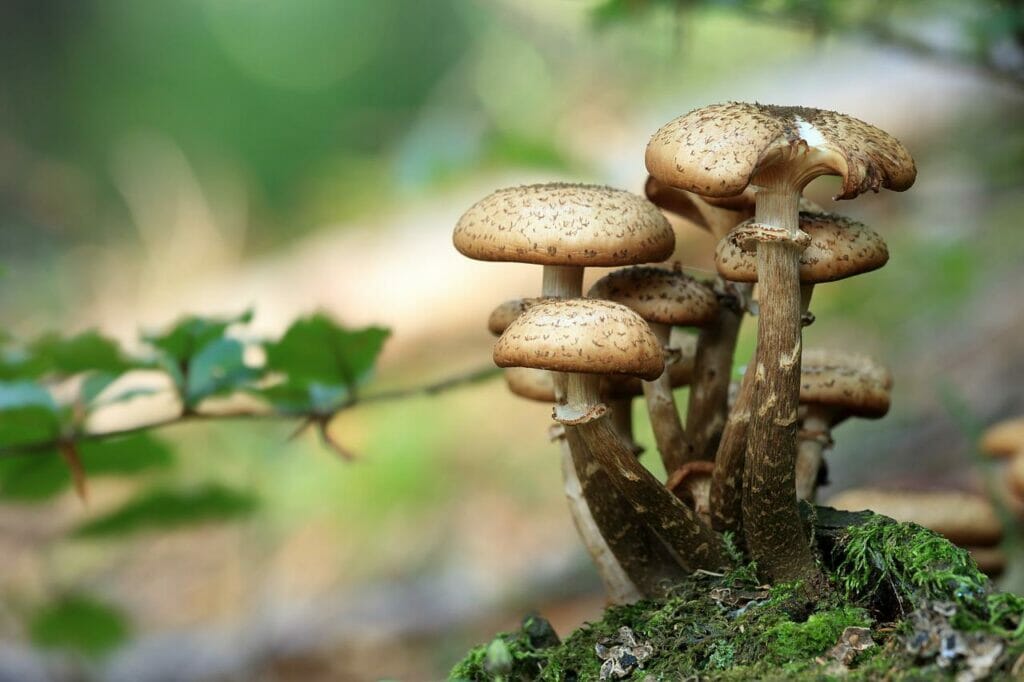 How Does Drinking It Make Me Feel

Ok, so the flavor is unique and definitely drinkable (even for a non-coffee drinker), but how does it feel to drink it?

I know most coffee drinkers drink coffee for the caffeine and the boost of energy that helps them wake up (or stay awake).

Now mud water does have some caffeine (35 mg per serving I believe), but this is nothing compared to the 150 mg or so per equivalent serving found in a typical cup of coffee.

Which I believe was one of the motivating reasons for the founder to come up with this stuff in the first place – he wanted to get away from coffee and the caffeine crashes he experienced.

So, mud water doesn’t have much caffeine in it (less than a typical cup of black tea in fact), but I still feel more awake after drinking it.

Just drinking this spicy, bitter beverage instantly wakes me up a notch and I agree there’s no jittery, anxious energy associated with it.

I had a mud water this morning because I stayed up too late last night (working, not playing) and it really does help.

Something else I like about mud water (and matcha and most teas in general) is that it helps regulate my stomach.

I don’t wanna go into too much detail here, but I have a mild case of IBS (irritable bowel syndrome) and drinking these hot drinks in the morning makes a significant difference with how my stomach feels.

Overall, I like the way mud makes me feel when I drink it and this has helped me continue trying it – so much so, that I’m definitely liking it better than I did at first.

By the way, I’m talking about the Rise powder, the one meant to be drank in the morning; they also have a Rest powder that doesn’t have caffeine – I haven’t tried that one.

At the time of writing this, it’ll cost ya about $40 for a 30 serving tin, and that’s only if you subscribe for automatic refills… it’s $50 for a one time purchase.

You can also purchase in larger quantities and save a few bucks.

MUD/WTR also offers kits, that includes a 30 serving tin, a USB rechargeable frother, a guidebook, and a sample of their sweetener and creamer.

This is what I purchased and it cost me $60 (without an automatic renewal), which I thought made sense since I could always use another frother.

By the way, their frother is no joke.

This thing is so much more powerful than the one I use for my match, it’s crazy.

It’s like a frother on steroids – and I mean that in a good way.

Which is really important too, because the mud powder doesn’t mix that well into water – you have to mix the hell out of it and you’ll still probably have a little lumpy powder left over at the bottom of your mug.

Overall, I consider my experiment with MUD/WTR to be a success.

I can now say that I’ve drank mud and survived. And I think my brother-in-law would be very proud of me for increasing the mushroom intake in my diet.

I’m still getting used to the taste, but the more I drink it, the more I like it.

It also helps that now I know how much powder to use.

I also have to say, that I appreciate the way this stuff makes me feel after drinking it – it does help me wake up in the morning (as well as keep things moving in my gut).

Will I buy it again? Will I continued to drink mud water in the future?

I don’t drink this stuff everyday, but I like having an alternative to my teas and matcha.

I also like having this stuff in the house so I can make other coffee-drinking family members try it.

Plus, if it at least half the possible health benefits from all those mushrooms and spices is legit, that alone is enough reason for me to continue drinking this stuff.

So, if you’re curious about the new muddy sensation, I say go for it. And if you’re really trying to get off coffee, I could see this stuff helping.

Helpful hint – if you’re having a hard time with the taste, try adding a splash of vanilla flavored almond milk, it goes a long way.