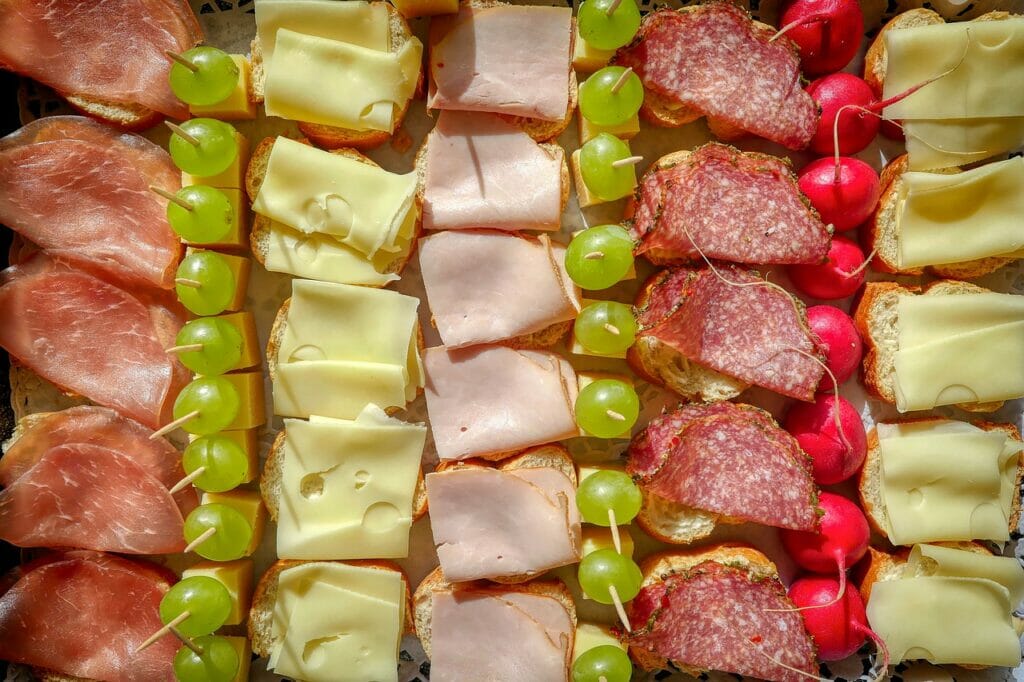 Turkey and ham are great, but I love salami too. Really any pork based product will do the trick in a pinch.

But if I’m being really honest, I’m not that fancy.

One of my favorite foods, a guilty pleasure if you will, is a huge Italian sub with hot peppers (Jimmy John’s does a great one)…delicious.

Anyway, I know that this stuff isn’t particularly good for me, especially all the Italian meats.

But my wife is always getting on me about the nitrates in this stuff and the problem is, I can’t really defend myself because I don’t know what nitrates are.

I know it doesn’t sound good, but other than that, I’m kinda clueless.

So, I figured it was time to educate myself, so I did.

What Are Nitrates Anyway?

Technically speaking, a nitrate is a compound that’s formed when 1 nitrogen atom combines with 3 oxygen atoms: NO3.

It’s been a long time since chemistry class, so that really means nothing to me.

In the real world, nitrates are used as preservatives to keep food (mostly meats) from spoiling.

Many processed meats, like deli meat, hotdogs (another personal favorite of mine), and bacon have nitrates added to them to make them last longer, but apparently the nitrates add to the salty and delicious flavor too.

So, in a nutshell – nitrates are preservatives.

Generally, because most preservatives are chemicals that are added to our food, you know, not naturally occurring stuff humans were really designed to eat.

And eating these chemicals is usually a bad thing because it could increase risk of getting certain types of cancers.

It’s interesting though, because nitrates are naturally occurring too and are found in a lot of healthy vegetables.

So, nitrates are a food preservative, and I know that preservatives are bad, so that makes sense that nitrates aren’t a good thing…but if they’re also found in healthy vegetables, are they really that bad??

Are Nitrates Really That Bad?

Ok, this is where things get a little confusing.

Nitrates themselves aren’t really that bad. As a compound, they’re pretty stable and won’t do that much damage in their normal state.

The problem is, when we consume nitrates, they can be transformed into another compound called nitrites (by removing 1 oxygen molecule).

These nitrites are more unstable and can turn into another thing called a nitrosamine, which pretty much everyone agrees has been shown to be carcinogenic (nitrosamines are found in tobacco smoke too, fyi).

So basically, nitrates can be a source of a carcinogenic compound.

According to one study, folks that eat 25 g of processed meat a day are like 49% more likely to get colon cancer.

It’s hard to say specifically that it’s the nitrates found in these foods that’s responsible for that increased risk, especially considering that most processed meats are high in sodium and fat too…

Something else worth noting is that when proteins (meats) high in those nitrates or nitrites are exposed to high heat, those nasty nitrosamines are more likely to be created.

This means that say, grilling hot dogs or cooking your bacon to a tasty crisp, makes them even more potentially carcinogenic.

All of this sounds really bad, but remember when I said nitrates are found naturally in some really healthy vegetables too?

Well, it turns out that cooking vegetables at high heat doesn’t create the same nitrosamines that are formed when cooking the meats- vegetables are lacking those amino acids (protein) found in the meat.

Also, vegetables are high in other nutrients too, like antioxidants, that help prevent the nitrites from turning into nitrosamines.

Actually, a lot of processed meats are adding vitamin C these days to help prevent the formation of these dangerous compounds too.

Regardless, it’s pretty safe to say that yes, (added) nitrates are a bad thing.

Ok, so my wife was right.

Nitrates uses as food preservatives aren’t healthy and eating a diet rich in them can significantly increase your risk of cancer, especially colorectal cancer.

But let’s be real, everything causes cancer.

Even if I dedicated my life to eating nothing but organic, whole food vegetables and meats that have been humanely raised on grass fed pastures and I never even looked at a hot dog- what about cell phones and radio waves and electromagnetic radiation and all that shit?

Let’s face it- unless you live in a cave completely hid away from society, you probably have an increased risk of cancer just from living in modern times.

I guess a reasonable person would accept this and just try to do the best they can to minimize the risk.

You know, that whole moderation thing.

Instead of eating deli sandwiches everyday for lunch, try limiting it to 2-3x/week.

Maybe only have bacon for breakfast 1x/week.

It’s fun grilling hot dogs in the summer time, but again, keep those numbers down to a reasonable count.

You may be thinking to yourself, “no problem, I always go for the uncured or no nitrates added options anyway, so I’m good”.

Well, I hate to burst your bubble, but most of those products are just as bad.

The FDA allows brands to mark their products as having “no added nitrites” if they don’t add the chemical sodium nitrite (or any other version), but the natural preservatives they use (like celery powder) creates the same amount of nitrates/nitrites.

And if you actually find a hot dog without any nitrates, you probably won’t want to eat it anyway.

Personally, I’m not sure I want to live in a world without salami and hot dogs, but I guess I’m willing to be reasonable and live in moderation.

Overall, be careful when planning those lunches.

As delicious as those processed meats are, I say pace yourself and live to eat another day.

I do want to thank my wife for motivating me to look into this whole nitrate thing- at least now I understand why deli meat has been referred to as the food equivalent of cigarettes.

If you made it all the way through this rant and want to read some more legit info, check out the sources I used for this article from webmd and healthline.