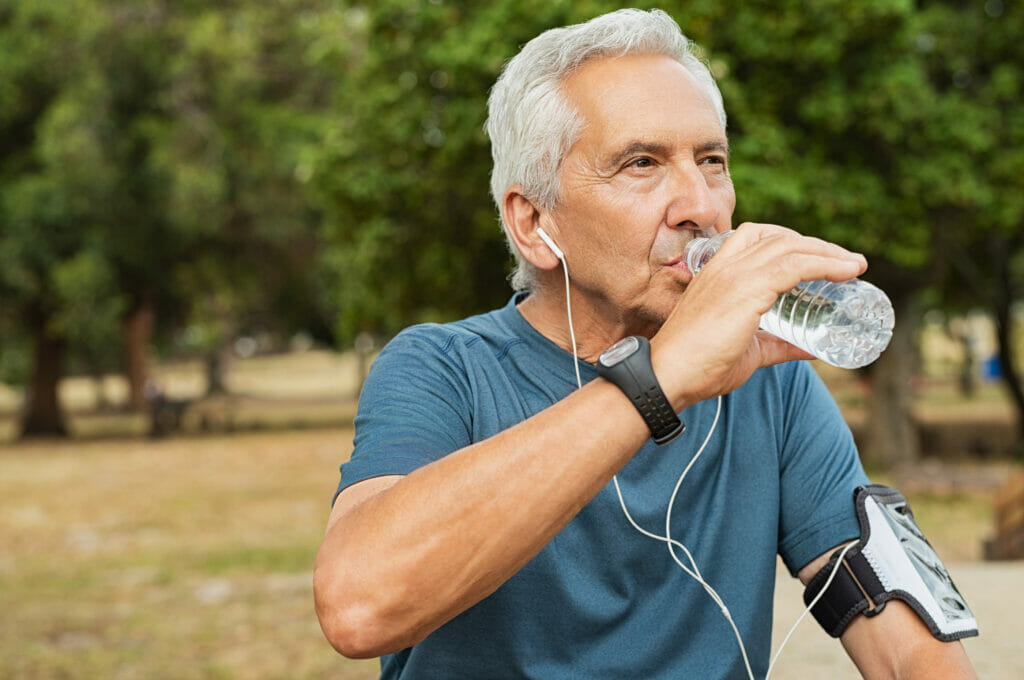 The result is a low-impact, comfortable workout machine that works perfectly for people who might have achy joints or difficulty using other types of fitness equipment.

If you’re looking for a safe, easy to use fitness machine, Teeter’s FreeStep LT3 is a great choice. But before you decide, it’s smart to do you due diligence- and that’s where I come in.

In this review, I’ll go over everything the LT3 has to offer. We’re talking specs, features, and everything in between.

I’ll also compare it to Teeter’s LT1 to help you decide whether or not it’s worth the extra cash.

After reading, you should know everything you need to in order to make the right decision for your home gym. Without further ado…

You may not be that familiar with the Teeter brand, but they’ve been around for about 40 years now. The family owned company started back in the early ’80s and have been succeeding due to their emphasis on quality and safety in their products.

Mr. Teeter, the company’s founder, suffered from chronic back pain for years. After finding relief with inversion tables, he decided to create his own version to offer to the public.

After the success of their inversion tables, the brand decided to branch out a little.

Nowadays, they still offer their popular inversion tables, but they also offer a few cardio machines that are low impact and easy on the joints as well.

Their recumbent cross trainers have become top sellers because they work surprisingly well for how affordable they are.

Currently, they have 2 recumbent cross trainers in their lineup: the LT3 we’re here to talk about and the slightly less expensive LT1.

The LT3 uses a magnetic resistance system. This means that as you pedal, there’s a metal flywheel rotating inside the base. There are magnets near this rotating flywheel and adjusting how far away or near they are to the flywheel changes your resistance.

Magnetic resistance systems like this are common in home fitness machines and they have their benefits.

Since the magnets never actually touch the flywheel, the action is very smooth and quiet. In fact, most users report the LT3 is nearly silent during use.

The resistance on the LT3 is adjusted by turning a dial located near the seat.

There are 13 resistance levels at your disposal and the cross trainer is set to the highest setting for delivery (keep this in mind if it feels really hard to use after assembly).

Some users have complained that the resistance is too easy, even at the hardest setting. It’s hard to quantify this, since all users are starting at different fitness levels, but the general consensus is that the LT3 isn’t great for offering intense workouts.

Which makes sense when you consider the population this machine is intended for.

The LT3 is designed to offer a safe and comfortable mode of exercise for folks who have difficulty using other types of fitness machines.

Most people in these situations aren’t looking for intense exercise- they’re looking for exercise they can maintain comfortably for extended periods.

But that said, if you’re looking for a machine that can offer a lot of resistance and provide an intense cardio or strength training experience, the LT3 probably isn’t the right fit.

Otherwise, the magnetic resistance on this recumbent cross trainer is quiet, smooth, and effective for providing a comfortable workout.

P.S.- I’m pretty sure the LT1 and LT3 use the same resistance system.

Having a comfortable seat is crucial for a recumbent cross trainer- after all, the point of this device is to provide a comfortable workout experience.

And what’s more important than the seat when it comes to comfort?

Anyway, most users are happy with the comfort level of the LT3’s seat.

The LT3 comes with an upgraded seat when compared to the LT1. The seat on the LT3 is easily height adjustable, allowing you to slide the seat into a comfortable position.

The backrest is also adjustable, allowing you to choose between 3 different positions. This is a nice feature, especially for people with back pain, because it gives you more options to customize your fit.

The LT3 also allows you to choose between 2 starting positions with the seat (forward vs back position). The forward position allows more room between the seat and the backrest (the LT1 doesn’t offer this option).

This model also comes with an upgraded seat when compared to the LT1. The LT3’s ComfortSelect seat comes with more cushioning, for a more comfortable feel.

Overall, the seat on the LT3 is very adjustable and comes with several upgrades over the LT1’s. Most users are happy with the comfort level of this machine.

Recumbent cross trainers can have circular pedal motions (like riding a bike) or more linear (like using a stepper).

Both motions are fine, but when it comes to cross trainers, most people prefer the linear motion because it’s usually a little more comfortable for achy joints.

The LT3 (as well as the LT1) utilizes a very linear, up and down pedal motion.

If you look at the image above, you’ll notice that that the positioning of the seat and pedals puts you in a position where you’re basically pushing straight down on the pedal as you exercise.

This is awesome because it makes for a very low impact form of exercise.

Recumbent cross trainers in this price range often use more circular pedal motions, so I give Teeter extra kudos for the way the LT3 operates.

When it comes to pedal motion, the LT3 reminds me a lot of the more expensive cross trainers (like the NuSteps). With this model, Teeter also added extra ball bearings to ensure smooth operation.

The assembly process for the LT3 is pretty straightforward. The base comes pre-assembled, and you’re basically responsible for bolting on the different attachments (pedals, seat, handles, etc.).

Unlike many fitness brands these days, Teeter actually does a pretty nice job with their instruction manual as well.

The images are large and clear, making them easy to read during assembly. There’s also easy to understand written instructions for each step.

One key point a user brought up is that you have to be pretty mobile to move around and attach the different pieces during assembly- depending on your physical abilities, it might be a good idea to have a friend or family member available to help during assembly.

Overall though, putting the LT3 together shouldn’t be that big a deal.

This means Teeter will replace or repair any malfunction of parts, paddings, workmanship, or materials for the first 2 years of ownership.

Two years isn’t a particularly long guarantee, but given the price of the LT3, it’s not awful. It’s also better than the 1 year warranty they provide on the LT1.

That about does it for the Teeter LT3. It’s actually a pretty simple device, but it’s quite effective at doing what it’s designed to do.

Which is provide a comfortable and safe way to exercise for folks who have a hard time exercising without pain.

I like the linear step pattern the LT3 uses and I think the improvements they made to the seat will be beneficial to most people. The thicker, larger seat should make this recumbent trainer comfortable for most folks out there.

The adjustable handles are also a nice touch.

Overall, I think the LT3 is a smart buy. For the price, you aren’t going to find a better recumbent cross trainer.

But does it make sense to invest the extra $200 and get the LT3 over the LT1?

If you ask me, the improvements made on the LT3 are pretty small. Honestly, you probably won’t notice the extra grip on the handles or the pedals.

But the thicker, larger seat and extra year on the warranty are more substantial.

If you have the cash, it makes sense to get the LT3 over the LT1 because it is a nicer model. But if the LT3 is out of your budget, I wouldn’t be too heart broken about settling with the LT1.

After all, both models are great buys.