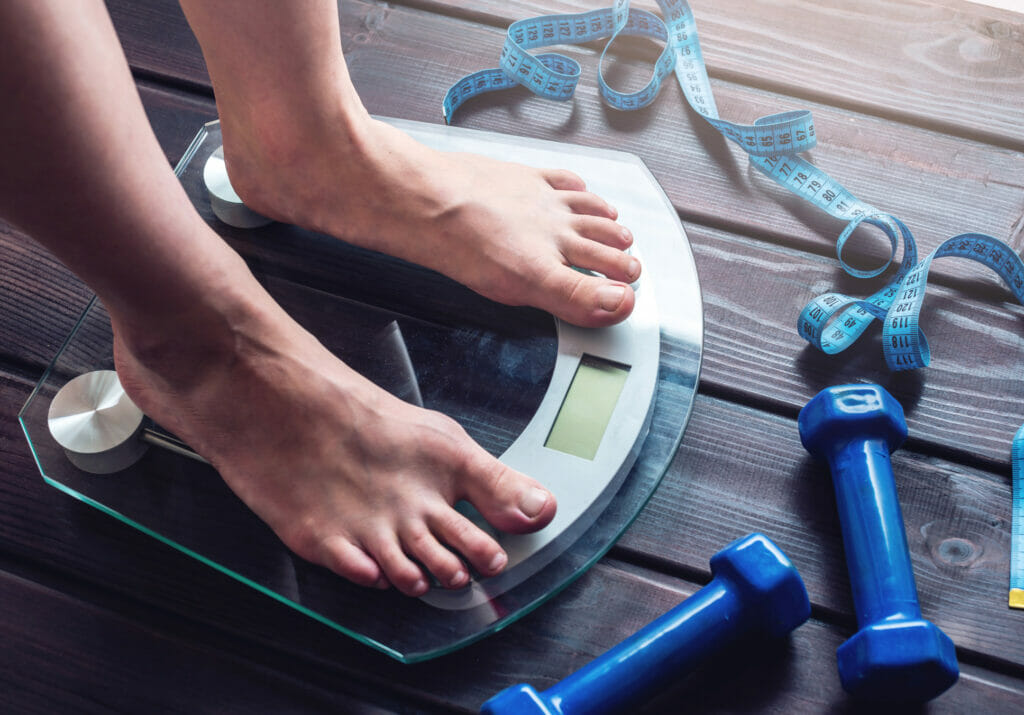 There aren’t many of us out there that haven’t tried to lose a few pounds at one time or another. And even though you can sometimes tell how much progress you’re making by how you look or feel, stepping on that scale is still the easiest way to gauge your progress.

Or lack there of.

But how often should you be stepping on that scale?

Does it make sense to weigh yourself every day or is that just setting yourself up for disappointment?

I don’t think there’s a clear cut, one-size-fits-all answer to this question, but that’s not gonna stop me from trying to answer it anyway.

P.S. – I’m not talking about weighing yourself daily for medical reasons, this is simply for otherwise healthy individuals trying to manage their weight. Please refer to your physician for any medical guidance (I’m not an MD or a dietician, just a fellow home-gymer).

Should You Weigh Yourself Every Day?

I was motivated to write about this topic after a recent conversation with my brother. He mentioned that he’s been trying to shed a few pounds and even though he’s been eating better and exercising, he hasn’t been seeing his weight go down.

He was surprised (and even a bit pissed) that the scale was showing he’d even gained a pound here or there.

And just a bit of background on my brother- he knows what he’s doing when it comes to exercise and diet.

This guy has successfully lost a considerable amount of weight over the years and knows how to count calories (a calorie counter can help, fyi), track what he’s eating, and all that.

So if he says he’s cutting back and exercising more, I believe him.

We got to talking about his routine and it sounds like he’s doing great. He started running more, cutting down on the sugar, and generally being more healthy.

He had been doing this for about a month at the time of our conversation.

We talked about how your weight isn’t always a great indicator of how you’re doing. You know, if you lose a pound of fat and gain a pound of muscle, your total weight doesn’t change, but you’re still getting leaner and stronger.

He gets that, but doesn’t really think that’s the case either.

So, then I asked about how he’s weighing himself.

He’s been doing weekly weigh-ins at more or less the same time of day each time.

I suggested the first thing he needs to do is standardize his weigh-in routine. Regardless of whether he’s going to weigh-in daily or not, every time he does weigh himself, it needs to be under the same conditions.

The easiest way to do this is to weigh yourself first thing in the morning (after you’ve gone to the bathroom), before you eat or drink anything.

This is how we teach people who have to do daily weights for medical reasons (heart failure, dialysis, etc) to do it.

Long story short, he agreed to try this method and we’ll see if his results change.

But I wonder if he should be weighing himself more often, even daily, to get a better idea as to how his weight is fluctuating throughout the week?

Pros And Cons Of Daily Weighing

The most obvious benefit of weighing yourself everyday is that it’s really easy to see how well or how poorly you’re doing toward reaching your goal.

You know, keeping a close eye on your progress.

It can also help you figure out which diet options are working and which ones aren’t. Seeing what your weight is after having a certain meal or meals can be beneficial in planning out your eating schedule.

Same goes for exercise- if your weight tends to a little lower the day after doing certain exercise routines, you might want to continue doing that type of exercise.

Having a daily weighing also helps you reign-in your diet before things get too out of control.

Maybe you splurged with a dessert, or went out for pizza and your weight is a little higher. Seeing this the next morning can be good motivation to do better.

On the flip side, weighing yourself every day can make it easier to get obsessed with your numbers.

And generally speaking, it’s not good to be obsessed over anything.

If you’re weighing yourself everyday and not seeing the progress you want, you can get upset, depressed, or anxious- all of which can have a negative impact on your diet and exercise routine.

And keep in mind- even though we use our body weight as an easy indicator of our health status, there are other measures we can (and probably should be) using instead.

Body fat percentage and waist circumference are 2 other metrics that can be used fairly easily and they may give better overall indicators of our health.

So, Should We Weigh Everyday Or Not?

I think it all depends on our personalities. If you’re prone to anxiety and tend to obsess over things, you might not want to weigh yourself daily because it could just lead to more trouble than it’s worth.

But if you’re not prone to those feelings, then I think it’s a good idea.

Of course, you have to wonder- if you’re weighing yourself less than 1x/week to begin with, are you trying to lose weight?

Which brings up another point- if you’re not trying to lose weight, you probably don’t have to weigh yourself as often. Or do you?

Maybe daily weigh ins are a good idea whether you’re trying to lose weight or not.

Personally, when I’m trying to lose a few pounds I like to weigh myself daily.

I like the daily feedback as to how I’m doing. And even though I hate seeing the number go up, it’s good motivation for the day ahead.

When I’m not actively trying to lose weight, I don’t weigh myself everyday. I usually drop down to 1x/week or so.

So, to answer this question as un-vaguely as possible- if you’re trying to lose weight, then I think weighing yourself daily is beneficial… but it’s certainly not for everyone.

Ultimately, you gotta do what works for ya.

And I’d love to hear what that is.

What do you think about weighing daily? Does it work for you or do you prefer another method? Leave a comment and let’s get the conversation started!