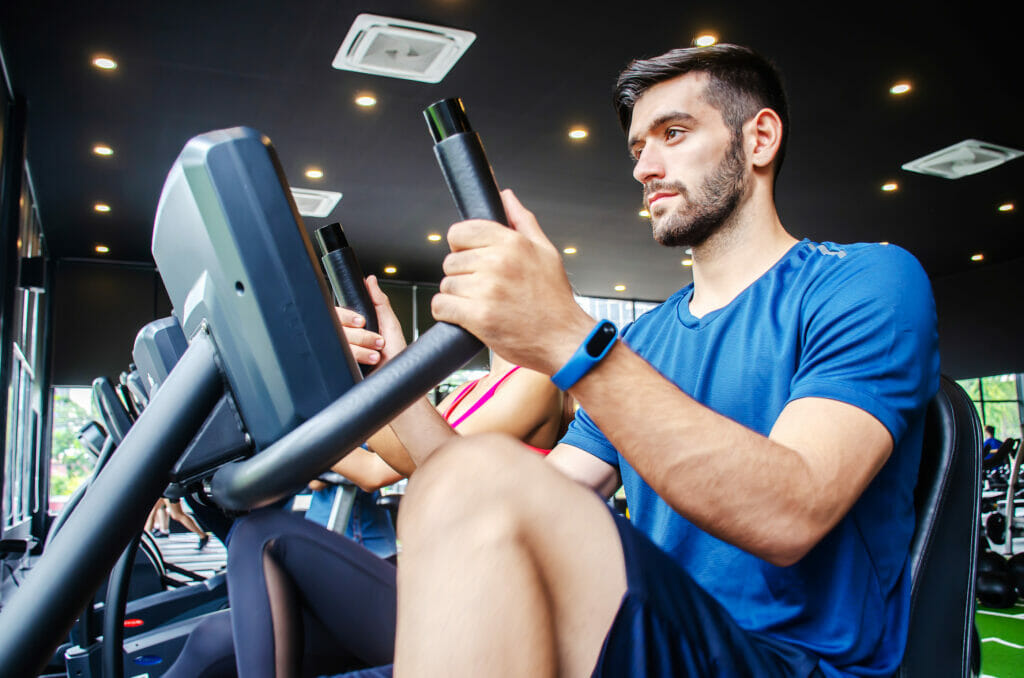 And I say “surprisingly” because most bikes in this price range are, hmm, how should I say this, let’s just go with less than impressive when it comes to pretty much everything.

Highlights of this $400 recumbent include a 14 lb flywheel, 18 levels of magnetic resistance, and 18 built-in workout programs.

So, if you’re looking for an affordable recumbent bike that’s more sophisticated than most, ProForm’s 235 CSX is a pretty safe bet.

But you shouldn’t take my word for it.

Instead, you should learn as much as you can about this bike and then make your own educated decision.

Luckily, I can help with that part.

In this review, I’ll go over everything the ProForm 235 CSX has to offer (as well as the areas where there’s room for improvement).

After reading, you’ll know whether or not this is the right recumbent bike for your home gym.

ProForm is a well-known brand that’s been around for decades. They’re a home fitness staple, offering a nice variety of cardio machines to choose from.

More recently, they’ve added more interesting machines as well, like their popular HIIT trainers, and they’ve even entered the fitness mirror game with the addition of their VUE.

ProForm is a part of the ICON Health & Fitness family, the same company that owns other titans in the fitness industry, like NordicTrack, FreeMotion, and iFit.

You won’t find the 235 CSX on their main website because ProForm is no longer providing this model directly.

But you can still find it through retail sites like Amazon.

With a sales price well under $500, I would consider the 235 CSX a very budget-friendly model.

Let’s start with the most important performance spec there is- the resistance.

Not only is this what determines how impressive your workouts are going to be, but it also creates the “feel” of your workouts.

You know, how smooth or not smooth the pedal motion is.

And to be honest, most exercise bikes in this price range don’t have a particularly smooth pedal motion because they tend to come with really light flywheels.

(The flywheel is the part that spins as you pedal).

Heavier flywheels produce more momentum as they spin, which creates a smoother pedaling motion during your workouts.

Cheaper bikes come with lighter flywheels because this is one of the ways the company can reduce costs (after all, there are reasons cheaper bikes are cheaper to begin with).

And when I say lighter flywheels, I’m talking about flywheels in the 10-13 lb range, although some probably come with even lighter ones.

With this in mind, consider that the 235 CSX comes with a 14 lb flywheel.

This is above average for this price range.

For the sake of comparison, Schwinn’s popular 270 Recumbent Bike (which costs about $200 more than the 235 CSX) only comes with a 13 lb flywheel.

Not only does this bike come with a pretty heavy flywheel for this price range, but it also comes with 18 levels of magnetic resistance- which is also unexpected, given the low cost.

Many recumbent bikes in this price range come with 8 levels of resistance that are adjusted by turning a dial.

With 18 digital levels of resistance, the 235 CSX gives you a lot more control over the intensity of your workouts.

And when you pair this with the heavier flywheel, the result is a smoother workout than you’d expect from a $400 recumbent.

Overall, I think the resistance system is the biggest perk this bike has to offer. Compared to the other recumbents in this price range, the 235 CSX is packing a more sophisticated resistance system.

The flywheel is heavier than you’d expect from such an affordable bike, but the frame is pretty average.

Most bikes in this price range come with lighter weight frames that don’t have much to offer when it comes to durability or stability.

In other words, they feel really lightweight when you sit on them.

And I’m not trying to hate on affordable recumbents here- again, there are reasons why some bikes cost less than others and that doesn’t mean there can’t still be value in these cheaper bikes.

When you look at the assembled weight and weight capacity, the 235 CSX is pretty average when compared to other bikes in this price range.

Fully assembled, this bike weighs a little under 100 lb. Most comps at this price point weigh between 80-90 lb, so actually I guess this bike might be a little heavier than average.

But with a weight capacity of only 275 lb, it falls right in the middle of the 250 – 300 lb weight limit range we should expect.

Overall, the frame is reasonably heavy-duty for such an affordable bike, but with a weight limit of only 275 lb, this model is better suited for smaller folks.

The ProForm 235 CSX comes with the following features:

LCD console- the console on this model is quite simple, but it’s easier to read than most with the backlit LCD screen. This screen displays all the key metrics you’d need (like distance, cadence, time, and calories), but it also measures watt output, which is a pleasant surprise. The console can be powered by batteries or an AC adapter, however neither is included (adapter sold separately).

18 workout programs- another nice surprise is the fact that this bike comes with such a large selection of built-in workout programs to choose from. The workouts are organized into 2 categories- watts and calories. When you select a workout, the console will control the resistance for you as per that workout’s profile.

Grip heart rate monitor- you can track your heart rate by grabbing the grip monitors located on the handles near the console. This bike is not compatible with chest straps.

Audio jack- there’s a built-in speaker in the console, so if you’d like, you can plug your mp3 player into the console to hear your workout jams.

Large seat- the seat is fairly large and has some lumbar support built-in. Users generally agree it’s pretty comfortable to sit on during workouts.

The assembly process for the 235 CSX is quite straightforward and ProForm does a nice job making their manual easy to follow.

There are large images and written instructions for each step of the way, making it easy to see what hardware is used for each step.

The main frame comes preassembled. You’ll be responsible for attaching the stabilizers, the console mast, the console, the seat, handlebars, and pedals.

When attaching the console, just make sure not to pinch those wires- I know from experience how annoying it is to get your bike fully assembled only to find the console is malfunctioning because of an error you made.

Overall, I think most folks should do just fine getting this bike assembled on their own. It might be helpful to have a second person around if you’re not comfortable moving the bike by yourself.

I would expect to spend an hour or so on assembly.

ProForm backs their 235 CSC Recumbent Bike with the following warranty:

I wouldn’t necessarily call this a good warranty, but given the price range we’re talking here, it’s not awful.

5 years on the frame is actually pretty respectable for a $400 recumbent. It’s better than the 3 years Sunny offers on their bikes, but it’s not nearly as good as the 10 years Schwinn offers on their similarly priced 230.

90 days on parts is really short, there’s no getting around it.

90 days on labor is fine, I wouldn’t expect much in terms of a labor guarantee anyway.

Overall, the frame guarantee is pretty solid, but the rest of this warranty could use some work.

Ok, that’s about all I have to say about the ProForm 235 CSX.

When you look at everything this recumbent has to offer, I think it’s pretty safe to say this is one of the better models in this price range.

I think it’s most impressive feature is it’s resistance system- a 14 lb flywheel and 18 resistance levels is impressive for any bike in this price range.

The 18 built-in workout programs are another obvious plus and I like that the console measures watt output because that’s a metric most affordable bikes don’t display.

The biggest downside I see is the short warranty.

I also think it’s kinda weird that it’s compatible with a power adapter and ProForm chooses not to include one (by the way, if you’re interested in this bike, I’d recommend purchasing the adapter- it’s worth not having to replace batteries).

All things considered, I think the 235 CSX is a pretty smart buy- as far as $400 recumbents go, it’s pretty impressive.