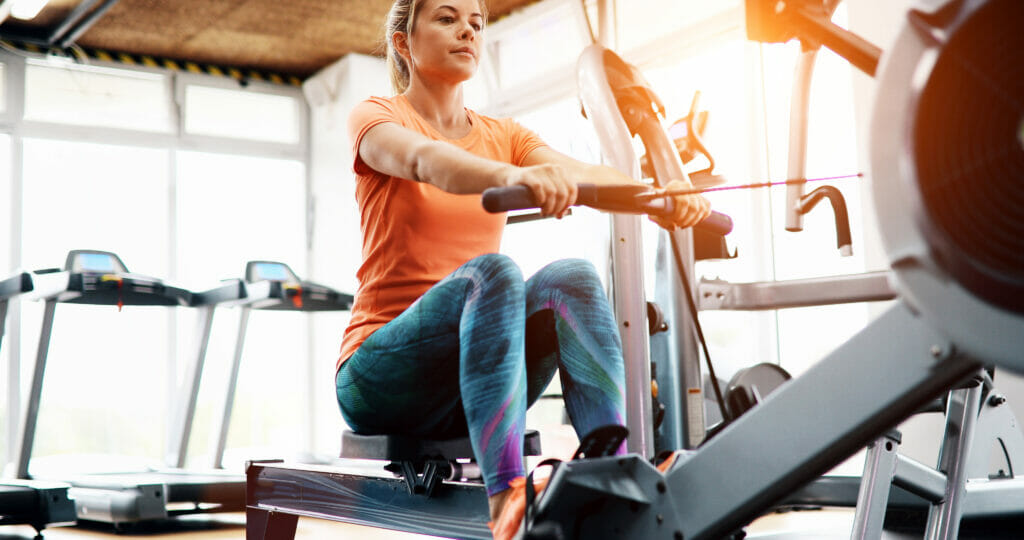 If you’re looking for a moderately priced home rowing machine, both NordicTrack’s RW500 and Concept2’s RowErg are great choices.

Both rowers come with impressive reputations and performance specs for their price range, making deciding between them a fairly difficult decision.

The biggest difference between these 2 rowers is that the RW500 uses a magnetic resistance and the Concept2 uses air, so ultimately, I think it’ll come down to which style of rower you prefer.

But if that sounds daunting, don’t worry- I got your back.

In this article, I’ll go over everything these 2 elite rowers have to offer- we’re talking specs, features, warranties…the whole shebang.

After reading, you’ll be well prepared to decide which one is the best choice for your home gym.

The NordicTrack RW500 vs The Concept2 RowErg

I have to assume we’ve all heard of NordicTrack before. I mean they are like the most well-known home fitness brand around (or at least here in the States anyway).

NordicTrack got their start a few decades ago with their Pro Skier Machine and the rest is history.

Since then, they’ve diversified into pretty much everything home fitness related- bikes, treadmills, ellipticals, you name it. Most of their products are designed to pair with iFit these days, but more on that later.

Concept2, on the other hand, isn’t quite as well-known. Although if you’re a rower, you’re probably very aware of the brand.

Concept2 started out back in the ’70’s when 2 brothers (who happened to be elite rowers) started selling their own custom made oars.

After a few years, they decided to branch out and design their own rowing machine and the rest, as they say, is history.

Concept2 only offers a few products and they’re all powered by the same air resistance system found on their RowErg.

The Concept2 RowErg, formerly known as the Model D, also just happens to be the most popular rowing machine on the planet.

It’s always being used by elite rowers, including Olympians, to train for events when getting in the water isn’t an option- in other words, Concept2 specializes in rowing and they’ve proven over time that they’re very good at what they do.

The RW500 is an older model, so you won’t find it listed on NordicTrack’s website, but you can still find it through retail sites like Amazon and Wal-Mart.

The RowErg is still an active model for Concept2, although you can choose between standard or elevated legs.

Anyway, now that we’re familiar with the brands, let’s start comparing these 2 machines.

The biggest difference between them has to do with the resistance systems, so I think it makes sense to start there.

Rowers are usually categorized based on the type of resistance they use (hydraulic, water, magnetic, or air) and each type of rower has its pros and cons.

The NordicTrack RW500 is technically a combination rower, meaning it uses a combination of magnetic and air systems to create the resistance.

But even so, it’s primarily a magnetic rowing machine, meaning that the majority of the resistance it creates comes from a spinning metal flywheel and magnets.

Magnetic rowers are great because they are very quiet and usually have a smooth feel.

Another perk is that the resistance you feel is consistent regardless of how fast you row- meaning you can row slowly against strong resistance, something air rowers don’t allow.

The RW500 comes with 26 magnetic resistance levels to choose from, giving you a wide range of intensity levels to work with.

It also comes with a manual lever that controls the air damper, allowing you to “fine tune” your intensity by adjusting how much air is getting to the flywheel as well.

Most users will agree adjusting this damper doesn’t affect much, but technically speaking, the more air that gets to the spinning fan, the more overall resistance you’re going to feel.

Overall though, users mostly agree that RW500 is capable of providing adequate resistance for a challenging workout.

The Concept2 on the other hand, is a good ol’ fashioned air rower.

This means that the resistance you feel is dependent on how hard/fast you row. Want more resistance, rower faster and you’ll get it.

Want less? Row slower and the resistance will decrease.

The biggest perk of an air rower like the RowErg is that there is no max resistance setting because the resistance depends on how hard you can pull.

This not only more closely mimics the feel of rowing on water, but it also makes these rowers great for HIIT workouts.

So, with the RowErg, you don’t set any magnetic resistance levels, but you can control the air intake to the damper. There are 10 settings, with 10 allowing the most air into the fan.

It’s kinda hard to wrap my head around the whole notion that adding more air doesn’t increase the resistance level, instead it’s more like adding weight to the boat.

Concept2 does a much better job at describing this, so I’ll just link to their article in case you want to read more.

Overall though, the RW500 is a magnetic rower and the RowErg is an air rower- this is the biggest difference between these 2 rowing machines, so if you know which one you prefer, it’ll make this decision a lot easier.

Moving on, let’s take a look at how the frames for these 2 rowers stack up.

So, the RowErg is a good 8″ longer, but weighs about half of what the RW500 does.

Usually, having a heavier frame is a good thing because it tends to equate to a more stable frame, although it’s important to look at the weight capacity too to get an idea of this.

The RowErg comes with a weight limit of 500 lb.

There’s a huge difference here between these 2 rowers.

Given that the Concept2 can safely handle users this large (and the fact that so many elite and Olympian rowers train on it), I’m inclined to believe it’s the more structurally sound rower here, even though it doesn’t weigh nearly as much as the RW500.

Of course, the RW500 is a magnetic rower, so it’s going to require additional hardware inside to function.

As an air rower, the RowErg is a pretty simple device.

This difference in resistance mechanisms has got to a big difference with the total weights for each.

Both of these rowers can fold vertically for storage too, fyi.

Both of these rowers come with LCD consoles, which is a good start, but there are quite a few differences between them.

The RW500 comes with a fairly large console, that not only includes the LCD screen, but quick-touch resistance buttons as well.

This console comes loaded with 30 different workout profiles, which is a huge amount for any rower. It’s also designed to pair with iFit, NordicTrack’s streaming workout app, for access to unlimited, instructor-led workouts.

The RW500 doesn’t have a large screen to view these workouts, so you’d have to connect to it through your own tablet or phone (I think the this rower used to come with a 10″ tablet included, but I don’t think that’s the deal anymore).

The screen on this rower tracks all the key workout metrics, like calories, strokes, pace, etc and with iFit, you can track metrics over time.

By the way, iFit is a paid subscription service and it’s optional. You get 1 free year of iFit with purchase, but you can discontinue after that if you don’t like it.

The RW500 is also compatible with chest strap heart rate monitors, which is a nice touch.

The console on the RowErg is referred to as the PM5 and it’s considered one of the most advanced rowing consoles on the market.

This 5″ monitor not only displays all the key rowing metrics you would want to track, but it also comes with 5 standard workouts and 5 custom ones.

The PM5 can calculate more advanced stats too, like drag factors and split times.

The pace boat feature is a nice touch too, allowing you to pace yourself based on a predetermined pace or based on a previous workout of yours.

There are also racing features you can access, making workouts less mundane.

You can save workout data to a USB flash drive and then log into that data via the PM5 memory function.

Overall, the PM5 is quite a bit more sophisticated than the RW500’s console when it comes to metric tracking, but the RW500 can connect with iFit, allowing you to participate with their instructor-led workouts.

Let’s compare warranties between these 2 rowers.

NordicTrack backs the RW500 with the following guarantee:

And Concept2 backs their RowErg with this warranty:

Ok, so these 2 warranties are actually very similar.

The extra year on parts is beneficial for the RowErg, but NordicTrack’s warranty on the RW500 is also quite generous. Especially considering the RowErg is a little more expensive.

Speaking of which, let’s talk numbers.

Now before I quote the prices for each rower, you have to promise to keep in mind that prices on these products can vary depending on promotions and where you buy.

Anyway, at the time of writing this, you can expect to pay the following (more or less) for these rowers:

Ok, so the RowErg costs about $100 more than the RW500, but both models are still well within the same price range. If you went with the RW500 and decided to use iFit you’d be responsible for that monthly payment too.

Alrighty, that’s about all I’ve got when it comes to these 2 rowing machines.

I think both models have a lot to offer.

Each comes from a brand with a good reputation and each comes loaded with nice features.

When deciding between them, you should consider whether you’d prefer a magnetic or an air rower.

You should also think about whether or not you like the idea of being able to access streaming workouts.

If you like the idea of having a nice quiet magnetic rower with unlimited workout possibilities (through iFit), then you should go with the RW500.

If you prefer the idea of getting a more realistic rowing experience and look forward to taking advantage of the unlimited resistance potential an air rower can provide, then you should go with the Concept2 RowErg.