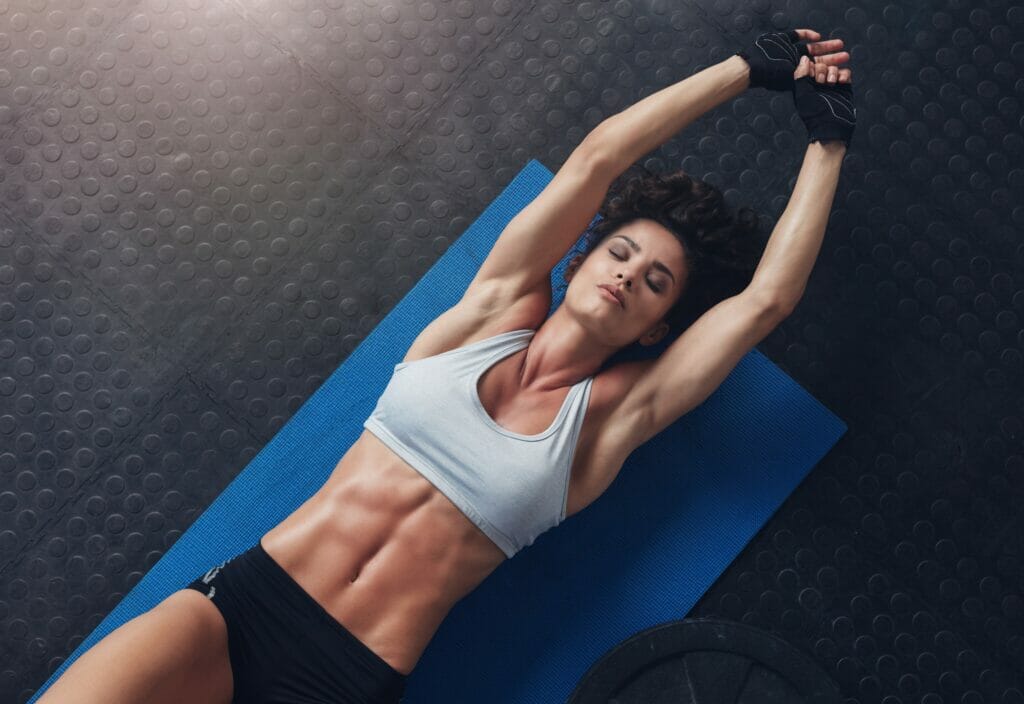 The landmine station is a versatile tool that can be used to work any muscle you want to target, but it’s especially efficient at working your core.

With a fixed anchor that has 360° of mobility, landmine stations are great for twisting and rotational actions, which force our cores to activate (whether they want to or not).

Plus, since landmines force you to use a barbell, you can really load up the resistance as much as you need.

There’s also the fact that you can do a lot of unilateral, or one-sided exercises, which inherently tend to require a little more core stabilization.

Put it all together, and it’s safe to say the landmine station is one of the best tools out there for crushing your core.

So, if you’re looking to take your core workouts to the next level, or simply add some extra variety to your routine, adding landmine moves is a great option.

But where to start?

Well, in this article, I’ll go over what I consider to be the best landmine core exercises we can do from home. These tried and true moves are guaranteed to get those core muscles working, as well as plenty of other ones too.

If you’ve been using landmine stations for some time, then you already know the answer to this, but if you’ve never used one before, you might be wondering what all the hype is about.

Honestly, there’s nothing magic about landmines, they’re just another tool you can use to get the results you want from your workouts.

You can perform all kinds of exercises with a landmine station, allowing you to target any muscle group you like.

But since the landmine holds one end of the bar secure to the floor, they work especially well for rotational exercises.

This allows you to combine twisting/lifting movements against resistance, forcing your core to engage and stabilize.

And when I say “core”, I’m talking about all the players, not just the superficial rectus abdominis – we’re talking the obliques, transverse abdominis, iliopsoas, glutes, erector spinae, quadratus lumborums, and more.

Hmm, I haven’t typed out some of those proper muscle names in a while… not sure they’re all spelled right…

Anyway, my point is, you can work a lot of crucial muscles with these landmine moves mentioned below, not to mention all the other more recognizable ones (arms, legs, chest, back, etc).

Landmines also offer a fairly safe way to perform rotational movements, what with one end being secure to the floor, but you still have to be careful any time you’re rotating with resistance.

Proper form and starting with low weights is essential to avoid injury.

The biggest downside to landmine exercises is that you need a fair amount of floor space to perform some of these moves… plus you kinda need a landmine station in the first place too.

I’m lucky enough to have a landmine station as part of my Force USA X15 Pro setup, but you don’t need a rack to take advantage of a landmine.

There are stand alone landmine setups that use plates to stay put or you can eve put an end of a barbell into a corner against a wall for security.

Regardless of your setup, landmines are great because they’re versatile and allow you to add a different spin to a lot of traditional weight training exercises.

And when it comes to the core, I would argue they’re one of the best tools around.

And there’s no better example of what the landmine has to offer than the oblique twist.

This move is going to hit just about every muscle in your body to one degree or another, but it really targets your core and shoulders.

This is a rotational move, so your obliques are going to be on overdrive here, but all the other muscles in your core are going to have to turn on as well.

There are a few different ways to do the oblique twist, including isolating one side at a time and even doing it from a kneeling position, but personally I prefer the standing version shown above.

Feel free to play with your grip position too – you can have both hands squeezing the bar together, or stagger your grip depending on comfort.

It’s a good idea to keep those feet a little wider than shoulder-width and remember to try and keep your elbows straight and drive from the core.

I like to do sets of 10-12 reps, but remember to do the same amount for each side.

This is a play on the classic ab wheel move, but having the landmine attachment adds a little twist.

Like the ab wheel though, there’s no denying the roll out is a killer core move.

Your core and spinal extensors are going to be on stabilization overdrive as they engage to keep your back from dipping as you extend out.

And then your abs and spinal flexors get a little extra work as you squeeze ’em while coming back to the starting position.

And with the landmine, you obliques and QL’s (quadratus lumborum) get a little extra involvement due to the arc in the movement.

Plus, there’s the added resistance you get from having to work against the weight of the plate on the floor.

Roll outs are easily amongst the best overall core moves, but make sure you’re keeping your core engaged throughout the whole move by trying to maintain a neutral spine.

If your lumbar spine start to dip (extend), you’re going too far out.

This one’s a no-BS play on a classic ab’s move.

And yes, I know it’s not really hip to do old school sit ups anymore, but as long as you don’t have any back issues and you do them correctly, they’re still a highly effective exercise.

And the inclusion of a landmine adds a whole new level of intensity.

First of all, you’re doing a sit up against resistance, so there’s that – but you’re also holding the resistance in one hand, which hits your shoulder muscle and works your grip at the same time.

And since the unilateral resistance is going to throw your balance off a little, your QL’s and obliques are gonna have to really kick in to stabilize.

You might have to play with your positioning a little, but you should try to start off with the bar at around shoulder height and try to keep your arm straight as you sit up.

You can also do this move with both hands at the same time with the bar coming between your legs, but I like the single arm version better.

And kudos to the gentleman on the video – he makes them look a lot easier than they really are.

The Russian twist is another classic core move that can be taken to the next level with a landmine station.

The side-to-side twisting movement forces your obliques to get involved, while holding the isometric crunch position hits all your spinal flexors.

Not to mention the shoulder and forearm involvement from holding and moving the weighted barbell.

This is another one where you might have to wiggle around a little until you find the most comfortable position – if you’re too far away, your elbows and forearms are going to be stressed too much.

You can always start off with keeping your feet on the floor too, and then progress to keeping them elevated throughout the move.

I like to use time for this move (aim for sets of 30 sec if you can), but reps would also work.

Yup, technically, this is a shoulder exercise (I even included it in my landmine shoulder guide), but the off balance positioning forces your core to engage big time too.

I doubt many of us spend much time in a half-kneeling position, so doing any exercise in this position is probably different.

And I’m a fan of different.

I get bored easily with my workouts these days, so sometimes a simple position change is all I need to keep me interested.

And having the barbell attached adds a nice level of stability to this exercise, making it nice and comfortable.

You won’t need much weight for this exercise, especially at the beginning, but as you get comfortable and get stronger, feel free to add that weight.

Focusing on keeping your belly button pulled in really activates your transverse abdominis (aka, TA), but all the other core players will turn on to stabilize your core throughout the lift.

And since this exercise targets the shoulders too, it makes sense to include it on your shoulder day.

Ahh, thrusters… an exercise I love to hate.

Much like the hateful burpee, thrusters work your entire body while getting your heart rate cranked up as well.

Thrusters can be done with dumbbells, barbells, or resistance bands, but they work especially well with landmine stations.

Mostly because landmine stations make it easy to do one side at a time, forcing the core to activate even more.

This move involves squatting and pressing weight over your head, so there’s no where for your core to hide – it has to turn on and big time in order for you to do this move without falling down.

You could justifiably include this exercise on shoulder day, leg day, or even use it as a great warm up before any workout.

You can also do thrusters with both arms at the same time, but again, for the sake of variety, I prefer the single arm version.

You can do a lot of stuff with landmine stations, but these devices are perfectly designed for core training.

Having the freedom to perform rotational movements in a relatively safe position opens the door for all kinds of core strengthening exercises.

Unilateral, bilateral, combo moves, core isolation moves… we could come up with a lot more than 6 exercises if we wanted to.

But I think the above exercise are a great representation of how a landmine can be used to work our cores.

You could pick 1 or 2 or the above moves and add them to any workout or you could totally create an entire landmine routine by using all of ’em.

That would be a tough workout by the way.

When using a landmine, just be mindful of your back and make sure you aren’t reaching beyond your limits – especially when it comes to rotational movements.

Start with low weights and really focus on form and you should be ok.

Well, that about does it, so get out there and start working those cores!