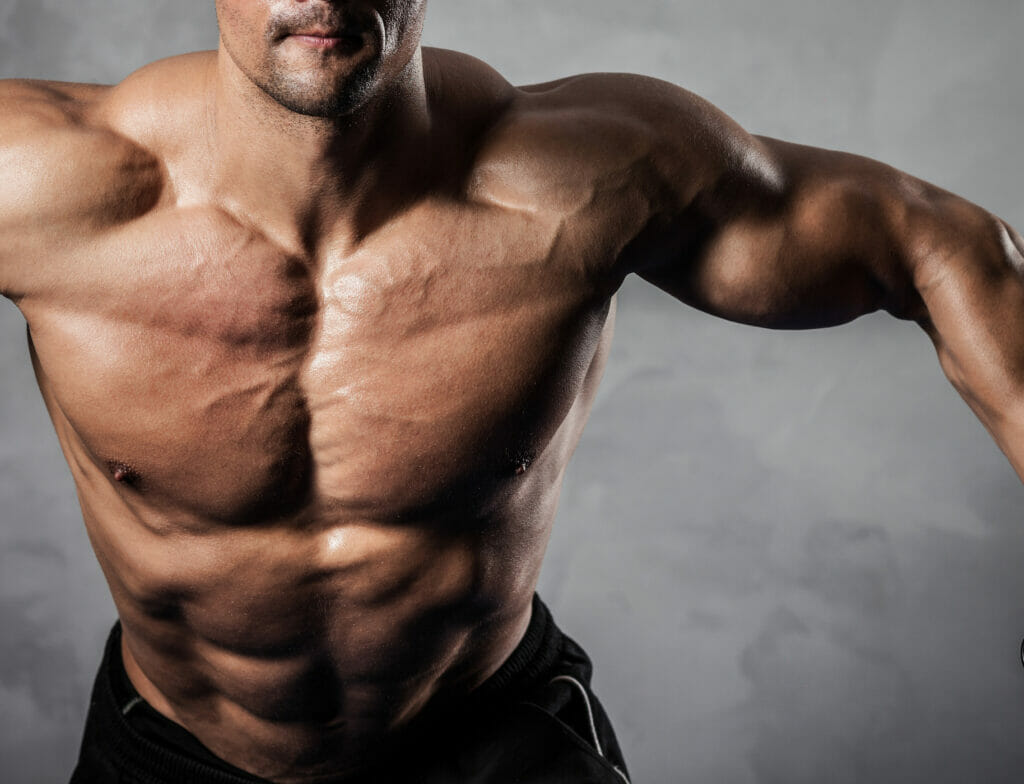 Landmine stations are great because they offer a ton of exercise variety and don’t require a bunch of bulky equipment, but they’re especially good when it comes to working the shoulders.

Mostly because there are a ton of different pressing and lifting moves you can do with landmines and when done correctly, they allow you to train with a more natural range of motion for the shoulder.

That said, if you’ve never used a landmine station before, it can look a little intimidating – but don’t fret, these shoulder exercises are pretty simple to do, you just need a little practice.

And I mean simple to do in the fact that these exercises aren’t complicated – that doesn’t mean they aren’t highly effective.

In this guide, I’ll go over some of the best shoulder exercises you can do with a landmine station.

After reading, you’ll be ready to add some serious variety to your workouts and get those shoulders stronger than ever.

I’m not sure who came up with the name for this setup, but I’d love to shake their hand because “landmine” is a great name.

Anyway, a landmine or landmine station is simply a device that you slide one end of a barbell into, anchoring it to the ground so you can use the other end for various exercises.

Any self-respecting commercial gym will have at least one landmine station and they’re often attached to power racks or other equipment.

For the fellow home-gymers out there, you might not have access to a proper landmine station unless you’re lucky enough to own a rack or functional trainer.

Personally, I never had a landmine or even a barbell until I recently invested in Force’s X15 Pro Multi Trainer (which I love by the way), but now that I have a rack and tons of attachments, I’m able to expand my routine.

And it couldn’t have come a moment too soon because I was painfully bored with dumbbells and resistance bands.

If you don’t have a rack with a landmine station attachment, but do have a barbell, there are stand alone stations you can buy; or you can always make your own by placing one end of your barbell into a corner of the room.

You could even do these exercises without a landmine station, you just might have to work a little harder to keep your barbell where it should be.

Landmine stations are awesome though, because they allow you to perform a lot of different exercises, while using a wide arc of movement.

They work great for rotational core strengthening moves because again, you can use a large range of movement that most fixed machines don’t offer.

This is what makes them great for shoulder exercises too – you don’t have fixed machines limiting your range.

So, if you want to add variety to your shoulder workouts and you have access to a landmine station, it’s certainly worth trying.

Speaking of which, let’s get to it already.

This one’s a classic that can be done with dumbbells, resistance bands, and barbells, but the landmine version is a fun alternative that might even feel a little more comfortable for questionable shoulders.

Holding the end of the barbell, start with the bar at shoulder height and push the bar toward the ceiling.

I like standing, but mixing it up with kneeling and half kneeling is a great way to add even more variety (and keep that core working).

I’ve been doing this exercise off and on with dumbbells for years and it’s a great way to work your legs and shoulders (and really get that heart rate up) all at the same time.

This exercise really just takes the shoulder press above and adds an extra layer to it.

Although for a push press, you really need to do it from a standing position.

Anyway, start with the barbell in your hand around shoulder height; bend your knees as if you’re doing a mini-squat and as you push yourself back up, press the barbell over head.

Make an effort to keep your core engaged by trying to gently pull your belly button in toward your spine.

Oh, also notice the angle the shoulder is pressing at with a landmine – not nearly as vertical as it would be with a dumbbell.

This movement is somewhere between a shoulder press and an incline bench press, which could make it more comfortable for people dealing with achy shoulders.

Here’s another exercise I used to do from time to time with dumbbells, but I feel like the landmine variation forces you to keep better form.

You know, forcing you to keep that elbow out and pull with the delts instead of your biceps and brachialis.

If you have shoulder impingement issues, just be careful and make sure nothing hurts while doing this move and concentrate on not hiking your shoulder blade up as you pull.

I would recommend starting light and gradually adding weight, while concentrating on proper form.

But overall, a great landmine move to target your middle delts.

This exercise really demonstrates the full range of motion thing I was talking about earlier and is a great option to hit pretty much your entire delt in one move.

Starting with an overhand grip on one end of the bar with your hand in front of your pelvis (and in a standing position), keep your elbow straight as you swing the bar out and overhead.

And you can get a great eccentric burn by slowing bringing the bar back to its original starting position.

It’s also good practice to encage your lower traps and rhomboids by trying to keep your shoulder blade down throughout the entire movement.

Hiking your shoulder blade is never a good idea, especially if you’re dealing with shoulder issues.

I’m gonna be honest, I haven’t done a lot of rear delt flys in the past because I’ve always preferred rear delt rows with resistance bands or the TRX, but I’m starting to switch things up now that I’ve got a barbell.

And again, variety is always a good thing when it comes to working out.

Our bodies are smart and very good at adapting to what we do, so if you do the same exercises all the time, it’s going to be harder to continue seeing gains.

Anyway, as the name implies, this move targets the back of your shoulder, but also works your rhomboids, middle/lower trap, and your rotator cuff.

Bend over at the waist and squeeze your shoulder blades down and back as you elevate the bar to shoulder height (from a bent over position).

This is another exercise where it’s a good idea to focus on light weight and form for a while before adding extra resistance.

This is a cool exercise because you get to work both shoulders at the same time, but in a varying fashion.

But you also get the added work needed as you transfer the bar from one side to the other, meaning the delts don’t get a break on this one.

Plus, think about the core stabilization that’s going on as you move the bar overhead from one side to the next.

Talk about an effective exercise.

When counting reps, you’ll want to do an even number, so both shoulders get to do the same amount of work.

Ok, there’s a lot of good stuff going on there.

If you’ve never done any landmine work before, I encourage you to try it out – it certainly adds a fresh twist.

I realize you need a certain level of floor space and a barbell to do these landmine exercises, so these facts alone will prevent some folks from being able to do them.

But, I hope the above videos prove that you don’t need a retail landmine station to perform these exercises – the home made variations work great.

I remember seeing guys gerry rig landmine stations at Gold’s with a plate and a barbell all the time.

Also, I didn’t rank these exercises in any particular order, it’s all great stuff.

You could totally use all of these exercises to complete an entire landmine shoulder workout or simply add 1 or 2 to your normal routine.

Also keep in mind that you can switch things up instantly by changing your position from standing to kneeling or half kneeling (this is also a great way to up your core strengthening game).

Well, I hope you found this article helpful.

And as always, if you have any comments or suggestions for exercises that should’ve made this list, leave ’em below and I’ll get back to ya soon.