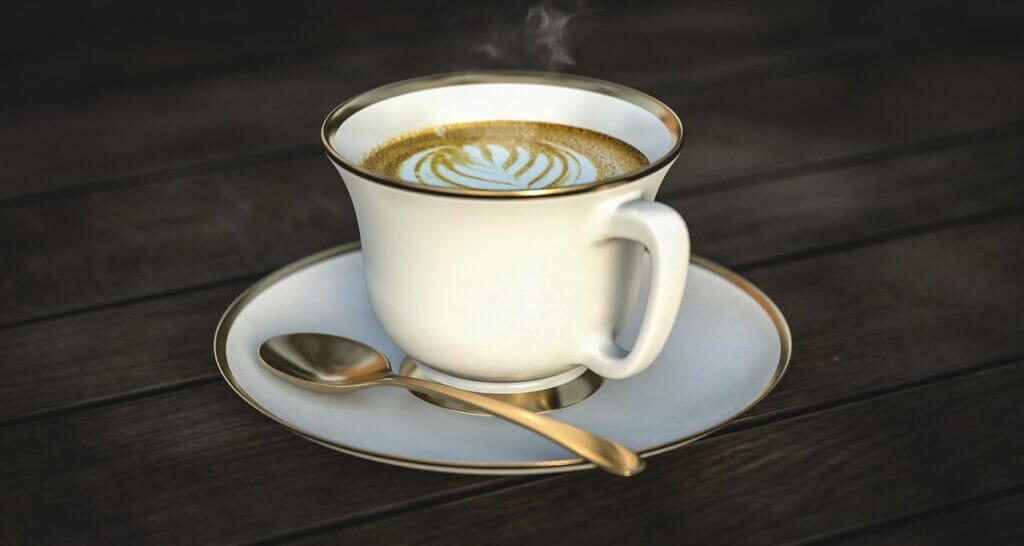 I think I’m probably one of the least trendy guys out there – I mean, I don’t actively seek out and follow new trends, especially when it comes to things like food, fashion, or music.

As a fitness blogger, I do try to keep an eye on what’s up and coming in terms of fitness equipment, but that’s about the extent of it (and I could probably be a little more proactive in this department too).

Anyway, I say all this because I’ve recently found myself drinking (and enjoying) matcha lattes.

Now I realize matcha has been around for like centuries in other parts of the world, but it feels like it’s just recently become hip here in the U.S.

I’ve noticed matcha is becoming more available at a lot of local spots now and I even saw Bobby Flay drinking it on one of his shows a while back.

Long-story-short, my wife has been hooked on Starbucks’ matcha lattes recently and she insisted that I try one too for the health benefits.

I have to admit they taste pretty good, but are they really that good for me?

First things first though, we should probably talk about what matcha is to begin with.

The way I understand it, matcha is really just a type of green tea.

And green tea is considered to be one of the healthiest drinks on the planet because it contains tons of antioxidants that have been proven to help our body function.

And these are just some of the health benefits associated with drinking green tea.

Green tea also contains some caffeine, which so many of us depend on for boosted energy, but it can also help speed up your metabolism.

Well, matcha is just another form of this wonderful drink.

Matcha comes from green tea leaves that are grown in the shade (with controlled sunlight exposure) – this is more labor intensive, but apparently it results in leaves that have a higher chlorophyl content.

The matcha tea leaves are grown differently, which helps pack them with more nutrients to begin with, but matcha tea is also prepared differently.

Traditional teas leaves are steeped in hot water and then removed before we drink what’s left over.

Matcha tea leaves are actually ground into a fine powder and then mixed directly with the hot water.

This means as we drink matcha, we’re consuming the entire tea leaf (minus the stems and veins), meaning we’re getting a lot more of all of those nutrients that are so good for us.

It turns out matcha has been consumed in this manner for centuries in Japan and other parts of Asia.

And you know what – as of 2021, Japan had the 2nd longest life expectancy of any country in the world (second only to Hong Kong).

Not to say matcha has something to do with that or not, but if you study the “blue zones” around the world, something these areas have in common is that their populations drink a lot of hot tea…

But What About Matcha Lattes?

Ok, so matcha is basically a concentrated version of green tea, so I think it’s pretty safe to say that matcha itself is pretty damn healthy.

But what about matcha lattes?

Technically speaking, they should be healthy, right?

Yes, pretty much, but depending on where you get your matcha latte, odds are it’s been sweetened up with something too.

Honey, agave, or good ol’ fashioned sugar is likely in the mix too.

Let’s take a quick look at the nutritional content for Starbucks’ matcha latte (Grande 16 oz) to see how it stacks up:

By the way, the above stats are for one of their matcha lattes prepared with cows milk – me and my wife drink it with almond milk, which will change those numbers a little I imagine.

I didn’t mention protein, but cows milk adds 8 g or so of protein that almond milk doesn’t provide.

Almond milk might have even more sugar in it too, depending on whether it’s sweetened or not.

Anyway, looking at these numbers, the first thing that stands out is that there’s a fair share of calories in one of these lattes.

There’s a little bit of fiber, which is nice.

Lastly, there’s a decent amount of caffeine too.

I don’t think I mentioned this earlier, but matcha tea packs a bit more caffeine than normal green tea, although it’s still a lot less than coffee (a 16 oz coffee would be likely pack at least 200 mg of caffeine).

As I drink one of Starbucks’ matcha lattes, I’m not surprised by this sugar content – it tastes sweet sure, but this is also Starbucks we’re talking about.

When I looked up their nutritional content, I saw that they use sugar as the sweetener -so you’re getting the sweetness from your milk on top of the added sugar.

Based on these numbers, I don’t feel completely comfortable calling this matcha latte “healthy”, but I don’t think it’s awful either.

I’ve never been a coffee drinker, so until recently I’ve never had much use for Starbucks (or really any other coffee shop for that matter).

But now that matcha lattes have arrived, I do have a hot beverage option other than boring ol’ hot tea.

Based on the nutritional stats above and the overwhelming health benefits surrounding green tea in general, I think it’s ok to enjoy matcha lattes on a fairly regular basis.

Although it’s important to keep in mind how much sugar (and calories) are in these drinks.

I doubt the added sugars eliminate all the health benefits from drinking the matcha, but they likely cancel out some of them (like maybe the blood sugar management benefits??).

Like all things, I think moderation is the key – as long as drinking the matcha lattes doesn’t drastically increase your total sugar or calorie intake, I say go for it.

And considering how healthy matcha itself is, I think I might try to incorporate more traditional matcha tea drinks into my diet – you know, get the benefits without all the added sugar.