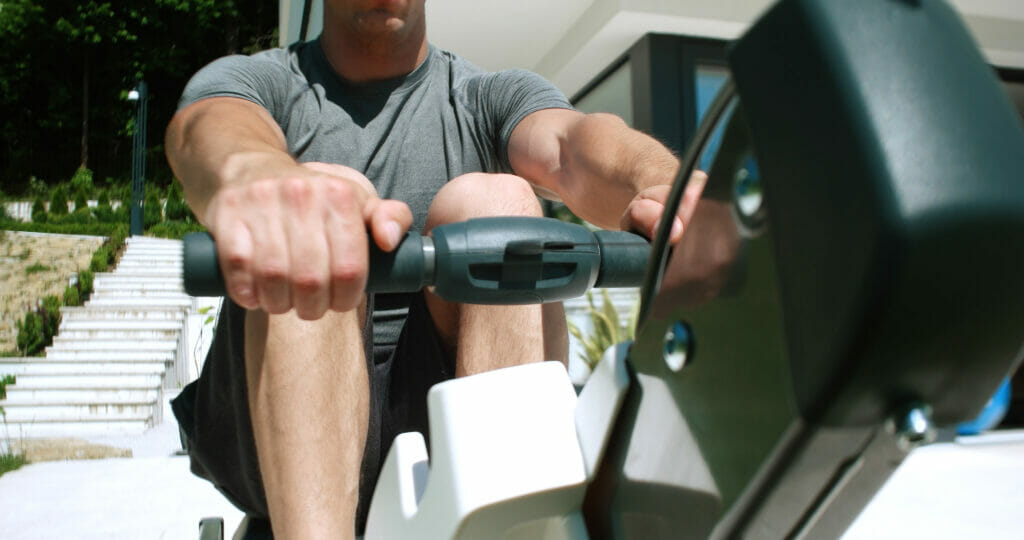 As the name implies, Stamina’s Conversion II Recumbent Bike/Rower is what you get when you combine (you guessed it) a recumbent bike and a rower together into one fitness machine.

Hey- if you can’t decide between getting a recumbent bike or a rower, why not get both?

After all, if you’re looking to maximize your workout options and you’re working with a limited budget or space, it seems like a pretty good deal.

And even though a lot of these combo machines kinda suck, I have to admit I was intrigued by the Conversion II.

So, I decided to look a little closer and see what it was all about.

Long-story-short: if you’re looking for a high-quality recumbent bike or rower, this isn’t the right option for ya.

But, if you’re looking for a cardio machine that can offer more variety than most and you’re ok with light to moderate intensity, I could see it making sense.

If you’re interested in the longer story, keep reading.

Stamina is a fairly budget friendly fitness brand (although you wouldn’t know it to look at some of their prices these days) that’s been around since the ’80s.

You may’ve seen their stuff on tv through their infomercials or through QVC- they work with a lot of other names and their products can be found under other brands like, Gold’s Gym, Body by Jake, or Tony Little.

Man, he used to cruise on that Gazelle Glider of his for days…

Anyway, Stamina’s still going strong these days and they’ve got a ton of fitness products to choose from.

I’m not sure exactly how to classify the Conversion II since it’s a combo unit, although to me, it looks a lot more like a rower than it does a recumbent bike.

So I’m gonna organize this article like I do my rower reviews.

Let’s start with the resistance, since that’s arguably the most important part of either a rower or a recumbent bike.

The Conversion II uses a magnetic resistance system that comes with 8 levels of resistance that are adjusted using a turn dial that’s right below the console.

Magnetic resistance is common for both rowers and recumbents and it has some advantages.

For one, magnetic resistance is smooth and quiet, so if noise is an issue, this is a definite plus.

Another perk is that magnetic systems provides a consistent resistance regardless of how fast or hard you’re pulling (or pedaling), unlike air or water rowers.

This means magnetic rowers don’t mimic the feel of actual rowing on water as much, but it also means you can row at slower speeds and still pull against harder resistance.

And that doesn’t really surprise me.

If I had to guess, I would assume this machine is using a pretty light flywheel (because if it was using a heavy one, Stamina would make sure to market that fact).

Eight levels isn’t many when it comes to magnetic resistance systems and more is preferred because it gives you more control over the intensity of your workouts.

Speaking of total resistance, users report the Conversion II is best suited for folks looking for light to moderate levels of intensity.

More advanced users or people looking for a lot of resistance will likely be disappointed here.

Again, not too surprising for a combo unit like this.

On the positive side, users do mostly agree that the Conversion II works smoothly and is quiet during use. Most folks have also had a fairly positive experience with this bike/rower in terms of overall quality.

Overall, when it comes to the resistance, it would be nice if it came with more than 8 levels, but for people who aren’t looking for a ton of resistance in the first place, it should suffice.

At first glance, the Conversion II looks a lot more like a rower than it does a recumbent bike. The only real differences are that the seat has a backrest and there are a set of pedals poking out of the main frame.

When looking for either a recumbent bike or a rower, it’s a good idea to consider how “heavy-duty” the machine is.

After all, nobody’s looking for a machine that’s gonna feel shaky or wobbly during workouts.

The best way to get an idea as to how heavy-duty a machine is is to check out the assembled weight and the weight capacity- these 2 specs will tell ya a lot.

I’m of the opinion that heavier is better in both cases.

The Conversion II weighs about 106 lb fully assembled and it comes with a 250 lb weight capacity.

I’m a little disappointed with the 250 lb weight capacity though, considering most quality rowers or bikes come with at least a 300 lb limit.

Speaking of users, there have been some complaints of the seat wobbling a little when pedaling, but most agree it feels stable as a rower.

By the way, the seat locks in place on the frame when it’s being used as a bike and you can adjust for height.

I mentioned that the seat does have a backrest, this is a good thing because it would be quite difficult to use the recumbent bike part without one.

You might notice that the backrest is reclined quite a bit- you can’t adjust this angle and some folks have mentioned that it’s reclined a little farther than they’d prefer.

You can also use the handle to perform bicep curls and tricep kickbacks. You can even hook the rowing handle to the seat and do leg presses- which I have to admit is a pretty cool feature.

Overall, it would be nice if this combo machine came with a higher weight capacity, but smaller users should feel stable during use.

The Conversion II comes with a small digital display that can track a few key workout metrics, like time, calories, distance, speed, RPM and heart rate.

You can only measure your heart rate while using the recumbent bike, since you have to use the grip monitors on the handles (this machine isn’t compatible with telemetry monitors).

The screen isn’t large enough to display all metrics at the same time, but you can hit the scan button and the metrics will scan through.

There aren’t really any workout programs built-in to the console, but you can set goals for the time, calories, and distance (you set a goal value, and then that metric counts down during your workout until you reach that goal).

That’s really all the console has to offer- it’s a very simple display.

I think Stamina does a pretty good job with the assembly manual. The images are large and easy to see and there are detailed written instructions along the way describing the process.

The actual assembly process itself is pretty straightforward- it’s basically the same as putting a rower together, plus the addition of the pedals.

The only cable connection is to connect the grip heart rate monitors that are built into the seat handles.

All of the necessary tools and hardware are included.

The warranty on this machine is a little disappointing.

It would be nice to see at least 5 years on the frame, considering the price range we’re in here.

90 days on parts is also quite short, considering most quality brands offer at least 1-2 years.

Overall, there’s definitely some room for improvement in the warranty department.

Ok, that about does it for Stamina’s Conversion II.

This is a unique combo machine that does have some value to give, especially for folks looking to get the most variety possible out of a cardio machine.

I like that you can not only use the machine for rowing and recumbent biking, but that you can also do a few upper body moves too (as well as leg press).

Based on the specs, I think it’s pretty evident that the Conversion II is best suited for smaller individuals and folks who are comfortable with lighter intensity workouts.

If you’re looking for a higher intensity workout, this is certainly not the right machine for ya.

I also want to point out there are much better rowing machines and recumbent bikes for this price.

Speaking of price, the Conversion II has a full retail price of $1200 on Stamina’s site (at the time of writing this anyway)- this is crazy high if you ask me.

If you’re interested, I’d suggest checking it out on Amazon- last time I checked it was on sale for about $800 (and I like it a lot better at this price).