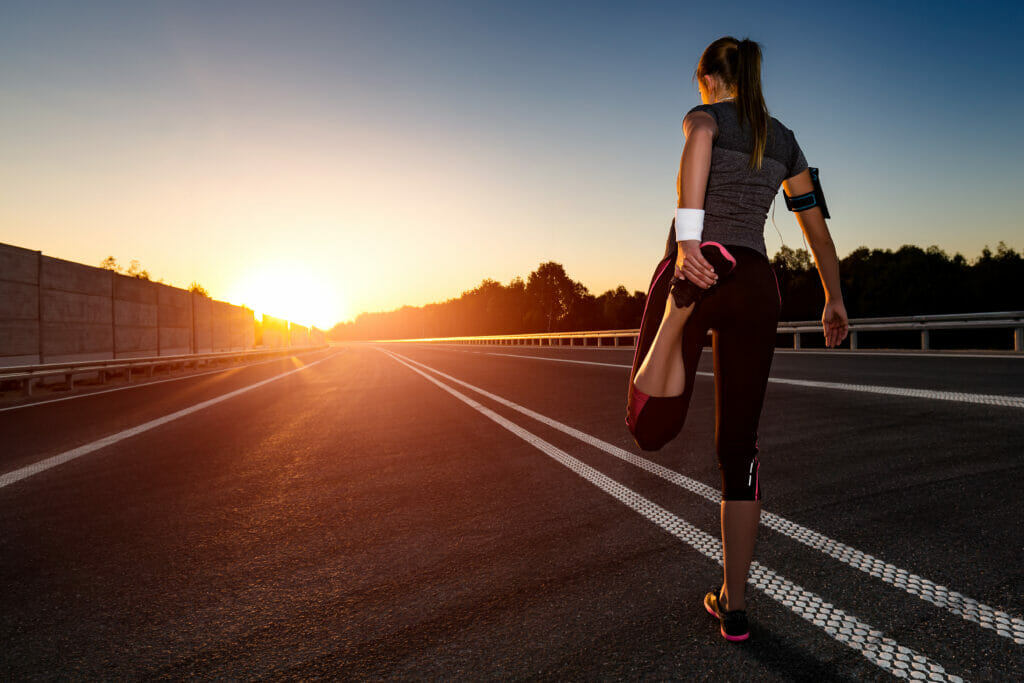 Even though one might think running is running, there are actually quite a few differences between running on a treadmill and running outside.

Not to mention what’s best for one runner might not necessarily be best for another.

Now I’m sure you serious runners and purists out there are hard set on outdoor running, but there are a lot of folks (myself included) who simply can’t muster the motivation to go out and pace themselves for any extended amount of time.

Does that make some runners just better than others?

All jokes aside, I think most of us can probably benefit from some combination of the 2, but ultimately, it really depends on what your goals are.

In this article, we’ll explore the differences between running on a treadmill and running outside and discuss the pros and cons of each environment.

After reading, you’ll have a better understanding of what type of running is best suited for you and your body (and maybe you’ll gain a little appreciation for us lowly treadmill runners along the way).

Running On A Treadmill

I should probably preface this entire post with the declaration that I am, in no way, a runner.

Technically, I do run on a treadmill 3x/week, but I still don’t consider myself a runner in any way.

I don’t look forward to running.

I don’t enjoy it while I’m doing it.

I watch the timer like a hawk until my workout is done.

I rejoice after the completion of each run.

And I dread the thought of my next run in the following days.

(If you’ve lost all respect for me at this point and want to stop reading, I understand fully- no hard feelings)

So, why do I put myself through all this misery? – Well,  because I love the way I feel AFTER my runs.

I appreciate the benefits of a good run and I really feel like I’ve accomplished something after doing it.

Personally, I do much better with treadmill running than I do with running outside. I’ve tried running outside a few times over the last few years (usually as the weather starts turning nice) and it just never lasts.

So, since I’m partial to treadmills, let’s start with the benefits of treadmill running.

The Benefits Of Running On A Treadmill 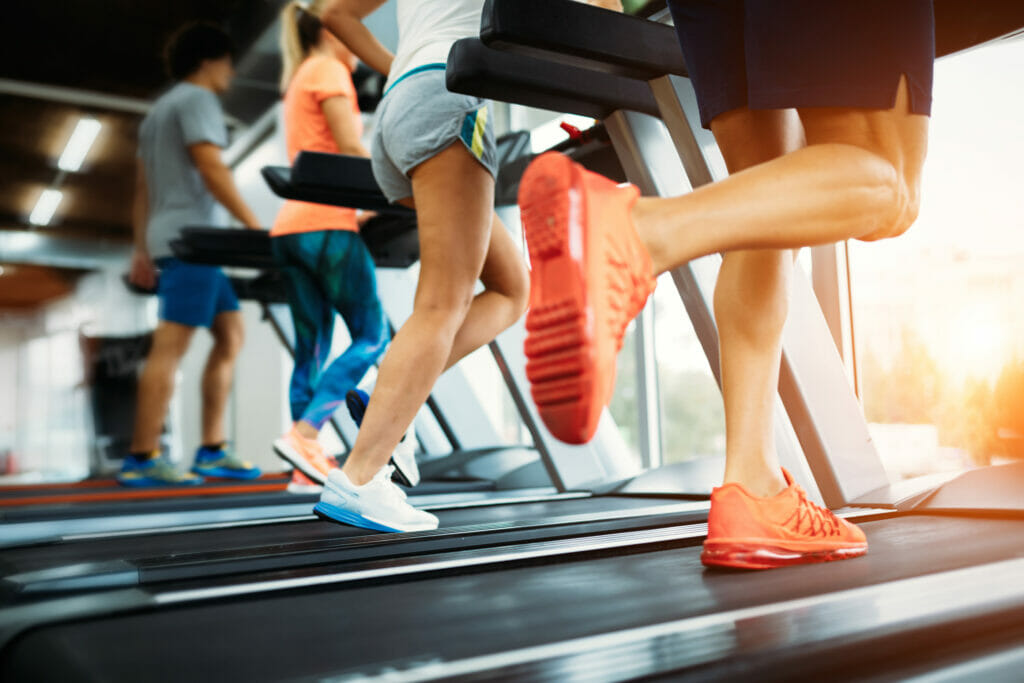 The most obvious benefit of using a treadmill vs going outside (besides the 0% chance of getting smooshed by a car) is that you can use a treadmill any time of day/night and any time of year without having to worry about the conditions outside.

Treadmills are used inside homes, where you don’t have to worry about rain or snow. And since most of us have lights in our houses, we can run safely at night without having to worry about hurting ourselves in the dark.

Even if your treadmill is in the garage, it’s still a lot more climate controlled than going outside.

Another huge benefit to running on a treadmill is that the treadmill holds you accountable- that is, it keeps pace for you.

If you set your speed to 6 mph, you have to run at that speed or you fall off the machine.

This is a huge perk for folks who have a hard time pacing themselves (especially when motivation is at a minimum to begin with).

On a treadmill, you get a very structured workout. You can set everything from the speed and incline to the time, ensuring your workout is everything you want it to be.

Treadmills offer a lot more shock absorption compared to running outside on asphalt too.

All treadmills come with some sort of shock absorption system that reduces how much stress is going through your legs and joints.

This makes treadmill running easier on your joints than traditional road running, which is a huge benefit for people who are prone to achy joints or overuse type injuries in general.

The Disadvantages of Running On A Treadmill

For one, if you’re training for a road race of any length, you’re going to benefit from running in the same environment as the race will be taking place- which is outside.

Even though your form might not change all that much on a treadmill vs outside, on a treadmill the belt is moving toward you, so you’re really just having to keep up with the belt.

This tends to engage your hip flexors a little more, as you’re elevating your legs to keep up with the belt (you don’t have to push off as hard).

Outside, the ground is stationary, so you have to propel yourself- if you’re doing this correctly, you should be engaging your hip extensors.

This slight difference in muscle activation can make a difference if you’ve been training for a race on a treadmill vs running outside.

It also means running on a treadmill is a little easier.

It makes sense that you’d burn more calories running outside too because you’re having to adapt to the road with every incline, decline, and dip it takes.

Not to mention going around obstacles and dodging pedestrians.

Now of course you can use incline settings to more closely mimic the terrain of running outside, and that can be quite helpful- but still, the best way to practice running outside is to run outside.

The Benefits of Running Outside 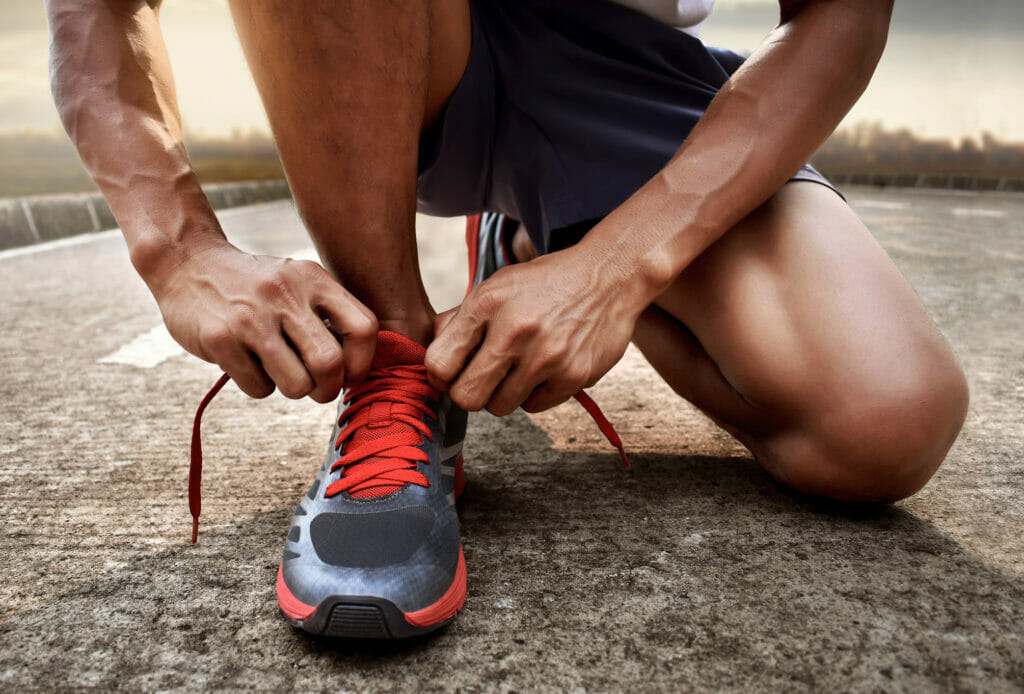 We’ve discussed some of the benefits of treadmills, so I guess it’s only fair to go over the benefits of running outside (as much as I hate doing it, I can admit that there are advantages).

First and foremost, there’s the scenery.

When you’re outside, you don’t have to run in place as you do on a treadmill- you get to move freely through your environment and take advantage of all the sights, sounds, and smells.

Plus there’s fresh air, sun, a nice breeze maybe… you know, all that stuff.

Running outside is the best way to prepare for a road race too.

As I mentioned above, if you want to get better at running outside (as in a race), you have to practice running outside. Like my old basketball coach used to say: “practice like you play”.

Technically speaking, you should also burn a few more calories running outside than you would on a treadmill.

The changing inclines of the terrain are to thank for part of this, but also because it takes more energy for your feet to propel you across the ground (instead of you simply keeping up with a belt on a treadmill).

So, if you’re looking for the utmost in calorie expenditure, you might want to take your runs outside.

And I’ll be honest, I didn’t look any research up to back this following statement up, but it makes sense that your legs would get stronger running outside as opposed to running on a treadmill.

Again, your legs will have to work a little harder to propel yourself, but also because of the added ground reaction forces coming up through your legs every time your feet hit the ground.

Keep in mind there aren’t any shock absorbing systems in asphalt or concrete.

The Disadvantages of Running Outside

The increased forces going through your leg bones and muscles can strengthen them, sure, but they can also cause a world of pain.

Anybody’s who ever experienced shin splints or any other type of repetitive micro-trauma related injury can attest to this.

People with arthritis or who are prone to tendonitis’ might find running outside difficult due to injury (which is a case where running on a treadmill might be beneficial).

The fresh air is great and all, but outside runners are also at the mercy of mother nature- bad weather can make running outside a whole lot less fun.

Running outside can also be dangerous, depending on where you live.

If you live in a city, you probably have access to sidewalks or parks where running is fine.

But if you live in the country, you might find yourself running on small, curvy roads where getting hit by a car could be a real danger.

And finally, when you run outside, it’s up to you to keep your own pace.

My complaining about this is a sure sign of how much of a runner I’m not, but hey- I admitted that upfront.

I find it hard to pace myself and if left to my own devices, I’ll probably half-ass my run (needless to say, I’m not training for any upcoming races).

On a treadmill, you can set the pace and the machine will make sure you stay honest.

When it comes to running on a treadmill and running outside, I think both scenarios can be beneficial.

Which one is best for you depends entirely on what your goals are.

If you want to run races, you’re going to have to run outside- it’s the only way to really replicate the experience of running a road race.

If you can’t stand the thought of running in place on a “hamster wheel”, you shouldn’t put yourself through it- run outside.

The same goes for the folks who can feel their knees hurting at just the thought of running on pavement- don’t put yourself through it, get a treadmill.

I don’t think it makes sense to torture yourself because you think running outside is the only true way to run.

If you’re only in it for the cardio (like me), there’s nothing wrong with only running on a treadmill.

You get the same great cardiovascular benefits of running on a treadmill as you do running outside (assuming your heart rate is comparable in both situations).

For you serious runners out there, keep running outside, it’s what you love and you’re good at it. But you should consider having access to a treadmill too for those days the weather doesn’t let ya get outside.

Overall, both styles of running have their advantages and disadvantages and a lot of us would probably benefit from a combination of the two.

But don’t expect to find me running outside anytime soon- I’m sticking to the ol’ hamster wheel for now.