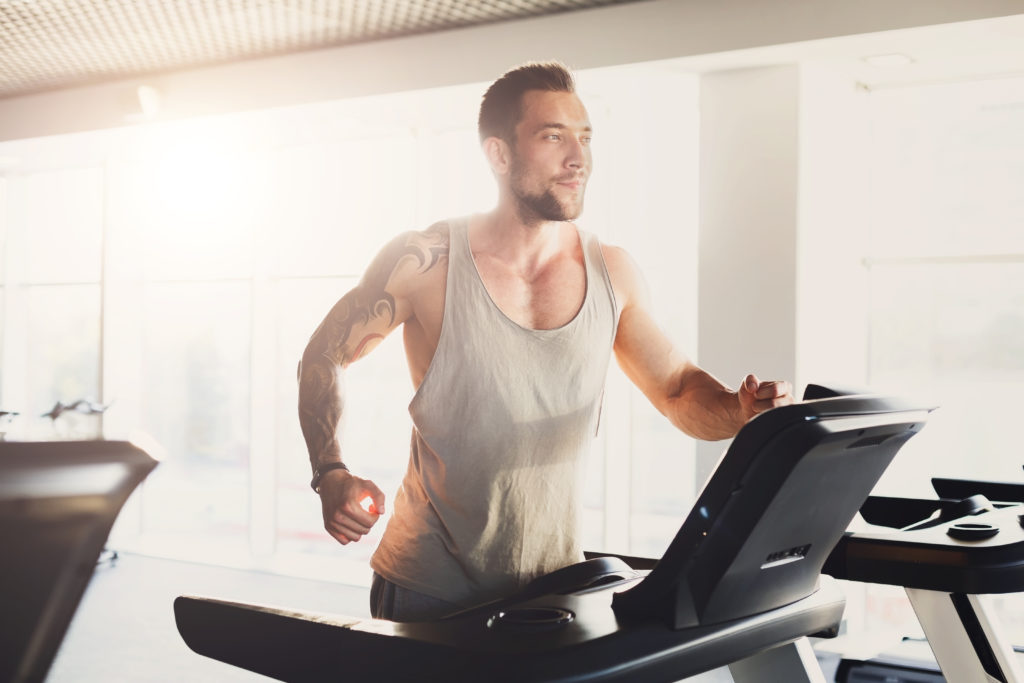 ProForm is a well-known heavy-hitter in the home fitness world and their Pro 2000 Treadmill regularly earns a top spot on bloggers’ “best of” lists each year (my own included).

And it’s not that hard to see why either.

There’s little room to debate the fact that this treadmill has a lot going for it – like a powerful motor, spacious running surface, folding deck, and an HD touchscreen display.

But accolades aside, the Pro 2000 isn’t perfect.

For example, the warranty could use a little work and the rollers could be a bit larger.

But all things considered, if you’re looking for an impressive treadmill to step your home gym up a notch, ProForm’s Pro 2000 might be a great fit for ya, but there’s a lot you need to know before making that decision.

And I’m here to help.

In this review, we’ll take a detailed look at everything the Pro 2000 has to offer – and I’ll also offer my 2 cents on where I think it falls a little short.

After reading this, you should have a better understanding of whether or not this is the treadmill for you.

Ok, let’s get to the good stuff already.

I mentioned in the intro that ProForm is a popular home fitness brand.

According to their website (bias aside), they’re one of the most recognizable fitness brands in the world and one of the top earners in terms of units sold and money made.

I have absolutely no figures to back this up, but if I had to guess, I’d say their statements are probably pretty accurate.

ProForm has been in the home fitness game for over 30 years and in that time, they’ve earned a stellar reputation for producing awesome equipment.

They concentrate on cardio equipment and offer a little bit of everything- treadmills, ellipticals, bikes, you name it.

Their HIIT trainers have also become quite popular (and rightfully so, they’re awesome).

Although all of their equipment is celebrated, I think it’s their treadmills that really put them on the map.

The Pro series is their highest-end lineup and of course contains the treadmill we are here to learn about.

Oh, one last thing I want to mention about ProForm- their treadmills are surprisingly affordable.

All of their models fall in the budget to moderate price range- their most expensive treadmill is still well under $2000.

The Pro 2000 is the entry level treadmill in their Pro series and will cost ya roughly $1,500, give or take.

If I had to name the single most important feature to consider on a treadmill, I’d go with running surface. I know, a lot of you might be surprised I didn’t say motor.

But to me, the running surface is the most important because it really dictates how comfortable you’re ultimately going to be during your workouts.

If the running surface is too small, you’re going to feel cramped.

If the belt is too narrow, you’ll be scared that you’re going to fall off if you drift a little – and if it’s too short, you’re gonna have to shorten your stride.

Both situations drastically reduce your comfort level and overall enjoyment during your workout.

Most high-quality home treadmills come with a running surface of 20″ x 60″.

I like to think of this as the gold standard because it’s been shown that most folks can comfortably use a treadmill this large.

Ha, sorry, tried to create a little suspense there.

Anyway, yes, the Pro 2000 comes with a nice large running surface that measures right around what we should expect from a quality treadmill in this price range.

At 60″ long, even taller runners shouldn’t have any problems stretching out completely when running at higher speeds.

The frame itself is pretty heavy-duty, coming with an “in box” weight of 262 lb.

I like to look at assembled weights because they give ya an idea as to how stable or robust you can expect the treadmill to feel – and as you might guess, seeing higher numbers is always a good thing in my book.

The “in box” weight ProForm (and NordicTrack) provide includes the weight of whatever packaging is in the box too, so we have to estimate how much this packaging weighs and subtract it to get an idea as to how much the treadmill itself weighs.

I have no idea how much the packaging for the Pro 2000 weighs, but if we subtract a conservative 50 lb from that number, we’re left with a treadmill that weighs somewhere in the 212 lb range.

(I doubt the packing actually weights that much, but it’s a good conservative estimate).

Anyway, the Pro 2000 is easily over 200 lb, so it should be heavy enough to offer a stable feel (especially for a folding treadmill).

It also comes with a max weight capacity of 300 lb, which is pretty standard for quality treadmills in this price range.

It also allows the Pro 2000 to accommodate the majority of users safely.

The deck is also equipped with ProForm’s patented ProShox Cushioning system, which is designed to significantly reduce the stress felt through your joints.

Less compact forces means a more comfortable workout, especially for people who may be dealing with arthritis or joint pain.

You can easily fold the deck vertically with the hydraulic EasyLift Assist system, which can save you a lot of space when you’re not using it.

Overall, the Pro 2000 scores highly with the extra large running surface and users seem to agree that the ProShox shock absorbing system works well too.

If the running surface is my first priority, motor strength is a close second.

Motor strength is important to ensure a smooth, quiet ride.

It’s also important when it comes to the actual lifespan of the motor- stronger motors should last longer because they don’t have to work as hard.

Most home treadmills come with DC motors somewhere in the 2- 4 HP range and if you’re planning on running regularly, it’s a good idea to aim for at least a 3.0 HP motor.

This is quite good for a treadmill in this price range, matching the horsepower of the motor found on the popular Sole F65.

It also comes with power incline settings between -3% – 12%, which means you can actually practice walking or running on a decline (handy when training for a road race).

With this powerful motor under the deck, the Pro 2000 won’t have any issues keeping up with your workouts.

Something else worth considering though, is roller size.

The rollers are what the belt physically rolls over and having larger rollers is always a good thing because they tend to make for a smoother feel (and also put less stress on the motor and belt).

Most high-end home treadmills come with rollers in the 2- 3″ range.

The Pro 2000 comes with 1.9″ rollers, so just a little below what I’d expect to see on a higher-end model like this.

Overall though, this treadmill scores highly with a strong motor and it’s pretty cool that you can train running downhill, something a lot of treadmills can’t offer.

The ProForm Pro 2000 comes with the following features:

10″ HD touchscreen display- the large display screen is one thing that sets this treadmill apart from a lot of the competitors out there. Well, that and the fact that it’s a touchscreen. This display makes it easy to see all your stats and works very well with the iFit app if you decide to go that route.

iFit enabled- this treadmill is equipped and ready to integrate seamlessly with ProForm’s fitness app, iFit. Through the app, you get access to unlimited instructor-led workouts, scenic routes, metric tracking, and more. The kicker is you have to pay a monthly subscription fee, but ProForm throws in a free month when you purchase this model. Just know you don’t have to sign up for iFit to use the Pro 2000 or any other ProForm treadmill for that manner, but if you don’t plan on using iFit, I’m not sure this treadmill makes a lot of sense.

Interactive training- another cool iFit feature is that the treadmill can automatically adjust its speed/incline settings to match what the instructors are telling you to do. This means you just have to keep up (you can manually control these settings too).

Bluetooth- the console is compatible with bluetooth headphones and heart rate straps for easy monitoring during workouts.

Quick touch speed/incline settings- these buttons make it easy to instantly set the incline and speed settings, a very convenient feature if you like to do interval training and are switching between settings frequently.

Cooling fan- the built-in fan will help keep you cool and comfortable during your workouts. You can choose between 2 settings for optimal comfort.

Tablet holder- the included tablet holder makes it easy to watch Netflix or read from your tablet during your workouts.

The assembly instructions for the Pro 2000 are fairly straightforward- the images could be a little larger, but the written instructions that accompany each step make sense and are easy to follow.

It would’ve been nice if ProForm included images of the hardware for each step, but that’s just me being picky.

It’s very doable to assemble this treadmill yourself, but you really should have a second person for assistance.

This is a pretty big, heavy treadmill and the job would be a lot easier with a second pair of hands.

I would plan on spending a couple hours on assembly.

The ProForm Pro 2000 Treadmill comes with the following guarantee:

The warranty is the only department where I feel the Pro 2000 falls a bit short – it’s shorter than I’d expect from a treadmill of this caliber.

I’d like to see a lifetime guarantee on the frame and motor (motor isn’t mentioned at all in their warranty, but I’m assuming it falls under the parts guarantee), which is pretty standard for elite home treadmills.

Two years on parts isn’t bad for a treadmill in this price range, considering most max out around 3 years.

And a 1 year labor warranty is par for the course, some brands will offer 2 years, but that isn’t that common.

Overall, this warranty isn’t awful, but it could certainly be better.

By the way, I’m not sure if I mentioned this earlier or not, but ProForm is owned by the same company that owns NordicTrack (ICON) and NordicTrack offers this identical warranty on the majority of their products.

The ProForm Pro 2000 has made a name for itself as one of the premiere home treadmills for the last several years and after taking a look at all the specs and features, it’s pretty easy to see why.

I love that it comes with an extra-wide running surface- something you’ll appreciate if you’ve ever used a smaller model before.

I also like the powerful motor ProForm put on this model.

This treadmill is also loaded with features, most notably that 10″ HD touchscreen console.

So, if you’re interested in taking advantage of everything iFit has to offer, I could see the Pro 2000 making a lot of sense because there aren’t many treadmills in this price range with such a large HD touchscreen display.

Speaking of which, there’s also NordicTrack’s EXP 10i, which is priced pretty identically – it comes with a slightly stronger motor, but otherwise it’s pretty darn identical as far as I can tell.

Might be worth checking out just to compare prices.

Overall though, I think the Pro 2000 is a wonderful home treadmill with a lot to offer- I’d even go as far as saying it’s one of the better treadmills in its price range.

In other words, a smart buy indeed.