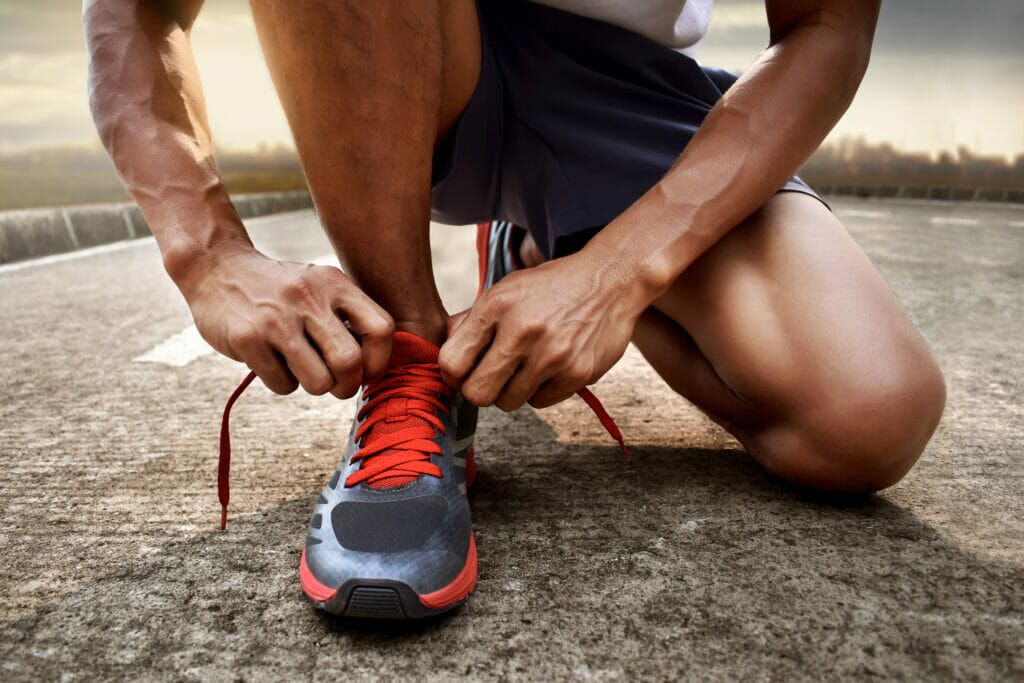 Shoes are to a runner what tires are to a car – they’re crucial for comfortable locomotion and they have to be replaced regularly for optimal performance.

The serious and elite runners out there certainly have their own methods for determining when it’s time to replace their running shoes, but what about the rest of us?

Is there a specific amount of time or mileage we can expect to get out of a pair of decent running shoes?

Do the same rules apply for all shoes and runners?

Well, these are the questions I plan to help answer in this article, using my own experience as the background.

Speaking of which, that’s probably a good place to start.

I wouldn’t even go as far as saying I’m a particularly gifted jogger.

I’ve never particularly enjoyed running, even though I realize how beneficial it can be as an exercise.

Until recently, the only real running I would do on purpose would be on a basketball court, where the excitement of the game distracted me from all the running going on on the court.

Well, these days I’m lucky enough to have a treadmill in my home, so I figure I should use it.

We’ve had it for a few years now and I have to admit, I was a bit slow to really get rollin’ with it.

But I eventually got in the routine of doing 20 min here or 30 there and my routines usually involved some combination of running/incline walking.

As I used my treadmill more, I’d like to say that I gained an appreciation for running and fell in love with it – but I don’t like to lie.

But I’ve noticed a significant improvement in my endurance since using the treadmill regularly, so I’ve been trying to gradually increase the amount of time I spend on it.

I was happy with the progress, so I figured I’d keep pushing it.

Well, just as I was starting to feel like a better runner, I started having issues with my legs.

It started out with lateral knee pain – as a physical therapist, I was able to address the quad and IT band tightness and I was able to get that resolved fairly easily.

Well, then I started noticing discomfort in the ball of my left foot.

It was mild at first and went away as soon as I was off the treadmill, so (I hate to say this as a therapist), I kinda ignored it for a while.

Well, the pain started getting a little worse and eventually spread to my right foot as well, so I figured it was time to start treating it.

Rest, ice, ibuprofen, combined with some self massage/stretching and I had my feet feeling pretty good again.

After about a week, I was about to hop back on the treadmill when I took a closer look at my running shoes…

There wasn’t any crazy wear and tear going on or anything like that, but it hit me that I had been using the same shoes for like 2 years.

It got me thinking: was the fact that my shoes were so old the reason why my feet started hurting or was it simply the fact that I was overdoing it with increasing my mileage?

How Often Should You Replace Your Running Shoes? 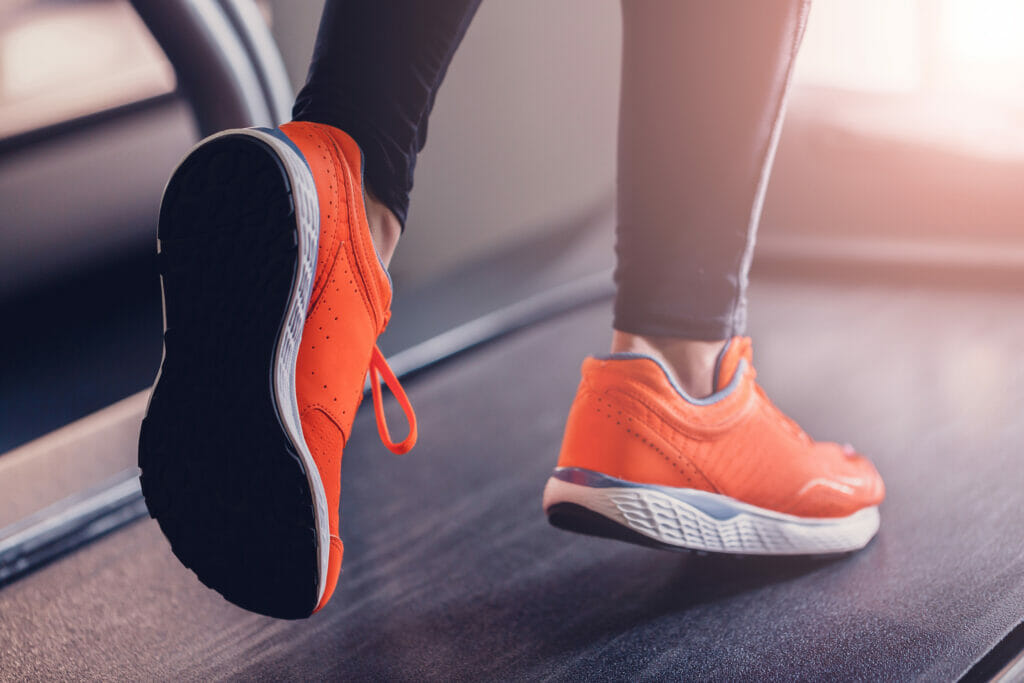 When this realization hit me, I was a little disappointed with myself, but to be fair until recently, I wasn’t putting that many miles on ’em.

To make the math a little easier, let’s say I was averaging about 10 miles a week on my treadmill, but more on this in a bit…

According to most running shoe brands, runners should be replacing their shoes every 300 – 500 miles.

This is because, like everything else in life, shoes breakdown with repeated use: arch supports become less supportive and cushions become less cushiony.

Over time, shoes become less supportive and less protective of your feet, so if you keep using running shoes after their lifespan, you put yourself at higher risk of injury.

So, this means it’s more of a mileage issue than a time issue – meaning we should have a way of keeping track of our mileage.

There are smart watches and devices that can keep specific counts for you, but the more casual runners (like me) will likely do just fine by knowing their average weekly mileage.

If you run 25 miles a week, that’s about 100 miles/month. That means a decent pair of running shoes should get ya 3- 5 months, meaning you’ll have to replace your shoes 2-3x/year.

If you run less like me, you don’t have to replace them nearly as often.

In my case, that’s very doable, making it even worse that I’ve gone at least 2 years in the same pair of running shoes.

Oh, something else worth noting- walking in your running shoes counts toward your mileage.

So, if you regularly wear your running shoes apart from exercising, like when running errands or just bopping around town, this activity counts toward your weekly mileage.

This is why it’s a good idea to have a separate pair of shoes you only use for running.

How To Know When It’s Time For New Running Shoes

Ok, so keeping track of your mileage is a pretty easy way to have an idea about when it’s time for a new pair of shoes, but 300 – 500 miles is a really big range.

How else can ya tell?

Well, ultimately it’s all about how things feel.

If your running shoes don’t feel as comfortable or supportive as they used to be, you probably need a new pair regardless of how long you’ve had them.

Seeing obvious signs of wear and tear is another tell tale sign that it’s probably time for new shoes.

If the treads are completely worn down or the cushions are flatter or seams are tearing, it’s time for new shoes.

Or even if the shoes look pretty good but you’re noticing changes in the way your feet/legs are feeling after normal runs, it could be time for new shoes.

As was the case in my situation.

I only used my running shoes for walking/running on the treadmill – I never wore ’em outside or did anything else in them.

They still look really good, although there’s some moderate wear of the tread around the balls of both feet (indicating I land more on the balls of my feet than my heels).

In my case, it was the pain in my feet that lead me to think it might be time for new shoes – which is even more evident now that I know that I’m at least a year past due based on mileage.

Something else worth considering is that all runners are built differently and your build/running style may also affect how long your shoes last.

Larger runners might wear out shoes faster than smaller runners.

And if you over pronate, you’ll probably wear your shoes out faster than someone with a more neutral arch.

Where you run, outside vs a treadmill, could also have an effect on how often you need new shoes (outside likely going to cause more wear and tear).

What it all really boils down to is that you have to listen to your body and look at your shoes to know when it’s really time for a new pair.

Ok, I promise I’m going to wrap this thing up because I feel like I’m starting to ramble on here, but I did want to conclude my story.

I went ahead and purchased a new pair of running shoes (I like Brooks, not sure why, they’ve just always felt comfortable for me) and I’ve been taking it slow on the treadmill.

So far, my feet feel pretty good, definitely a lot better than before.

I’m not getting the achy pain in the balls of my feet/big toes, but I still get a sense that the pain could return if I’m not careful.

So my plan is to drop my mileage a little, maybe shoot for 6-7 miles/week, and gradually build up from there.

If my pain returns with new shoes, I’ll have to take a closer look at the way I’m running.

I know I’m a forefoot lander and it could be that it’s just the repeated landing that’s causing my issues – I’ve always been prone to overuse injury and the older I get the more evident it becomes.

Anyway, one thing I know is that I’ll be swapping my shoes out at least 1x/year now.

And even more often if I really ramp up my mileage…but I have a feeling that won’t happen.